Once upon a time, I signed up for a Groupon to an introductory sewing class.  I took that class roughly a month ago....and I LOVED IT!!  I had so much fun on that random Thursday night with a few unsuspecting strangers, an eccentric British teacher, and this little sewing machine :) 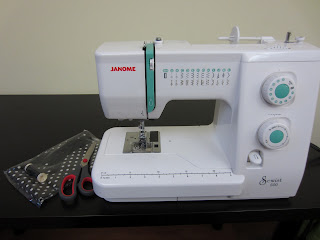 I remember signing up for the class because it sounded like something fun and random to do in this sometimes all too predictable city, but also because I remember how much fun I had making a stuffed penguin back in high school home economics.   We even sewed by hand in those days.  My favorite part about sewing is that you are creating something out of what seems like nothing.  That, my friends, is what adventure is all about!!  So, in my normal fashion, I rushed into the sewing studio just in time for the class to begin.  I chose a fun and exciting black and white polka dot pattern for my project.  We were given a brief orientation to the machine and some practice rounds on scrap fabric before we got right into the sewing action.  We took it step by step and there weren't too many steps for this project, but I truly did enjoy myself.  Here are a couple of pictures of my progress throughout the project. 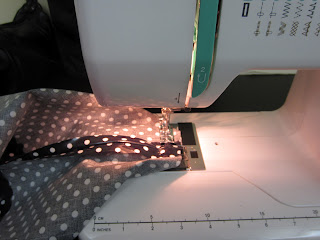 I had such a feeling of accomplishment when I finished my last stitch.  I'm still not exactly sure what I'll use the bag to store just yet, but I am a quite proud owner of my very own hand machine crafted zipper bag!! Isn't it a beauty? 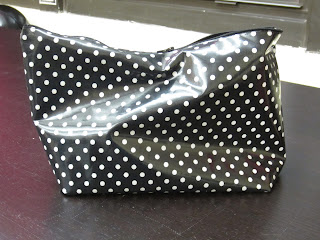 Have any of you recently completed a project and felt that great sense of accomplishment and pride in your work?

One of my former college roommates is originally from Bulgaria.  Fortunately, we both live in New York City now and are able to get together from time to time.  She is a true treasure of a friend and we always have a great time catching up and spending time together.

Most recently, Vanya invited me to a Bulgarian Dance Festival that took place in a school auditorium nearby my apartment.  It was quite interesting.  There were a couple of different dance troupes performing and several wardrobe changes throughout the night.  I was very intrigued by the exciting and fun dances that were performed.  It made me a little sad that there are no national dances that all Americans are familiar with and could perform any time the moment was right.  America has more regional and cultural dances as we are such a melting pot for so many different types of people and cultures, but after attending this performance I was convinced it would be fun if we had a few uniform American dances, too :)  Check out some of the pictures I took of Vanya's dance troupe... 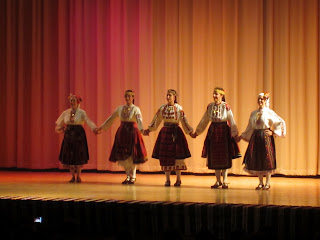 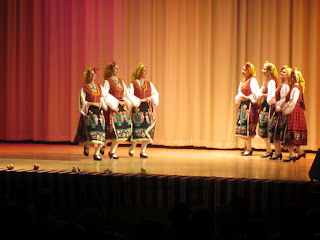 After the show, I felt even more prepared for my eventual visit to Bulgaria.  Gotta figure out a good time to get that one crossed off my bucket list.  Pack your bags, Vanya... 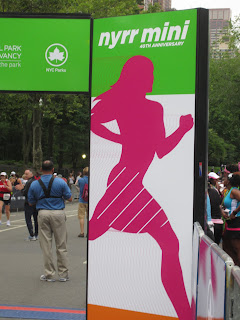 This race was a woman's only event.  I have only done one other all women's race - the Diva Half Marathon in Long Island - a couple of years ago.  I loved it.  The atmosphere for this race was a lot of fun as well.  There is something about a race being exclusive to women that makes it somehow more exciting.  In addition to the hype of it being women only, the weather was amazing for running!  The official temperature was 69 degrees with 5mph winds.  Perfect!  In fact, the whole race I thought it might start pouring down rain at any moment.  Fortunately, it held off until I crossed the finish line and collected my medal....yes, they gave us medals!!


Anyway, on to the race itself.  This race began on 61st and Central Park West.  We ran for about a mile and a half before we entered the park.  I really liked this part of the course.  Even though I had some knee/leg pain throughout much of the first mile, I still clocked in pretty close to 11:30.  I was a bit surprised as I hadn't done too much running since the Brooklyn Half a couple of weeks ago.  After that I really needed a bit of a break from running and then work got really busy so I have been swamped.  I did manage to get in a few decent runs the week or so prior to the race, but I wasn't expecting to be too stellar on the course.  Needless to say, I kept it pretty consistent with the first couple of miles.  I started to get warmed up around mile 2 and was feeling pretty good until I hit the 5k marker at 37:55.  I wasn't entirely disappointed in that time, but I just started to feel a little off at that point.  I tried to force my mind to think about something else and not to think about it, but I kept feeling a little faint.  Needless to say, the second half of the race was not too fun.  I couldn't decide if I should walk, stop for a breather, ask for help at the next water station, drink a bunch of Gatorade, or just shake it off.  I ended up just putting one foot in front of the other convincing myself that I would be finished soon and if I still felt bad I could take a visit to the medic tent at the finish line.  My 4th mile was probably somewhere around 14 minutes as I couldn't decide what would be best and was really struggling.  I made my decision at the mile 5 marker to try to finish as strong as possible, but not to completely overdo it.  The last two miles were somewhere between 12 and 13 minutes each which was a feat in itself at that point in time.  As soon as I crossed the finish (and collected my lovely medal!!), I made a beeline for the bagels.  After washing half the bagel down with lots of Gatorade, I started to feel a little less lightheaded and shaky.  They were handing out popsicles as well so I grabbed one of those and got some sugar in my system.  I walked around for a few minutes as it began to sprinkle.  I felt better almost immediately after eating something so I chalked it up to not having enough to eat the night before and morning of the run.  I didn't feel bad for the rest of the day or weekend so I think that must have definitely been it.

With this race in the record books, I have just one left to complete my goal of qualifying for the 2013 Marathon.  I've signed up for that one in September when work will be a little bit calmer and hopefully my running schedule will be more in tact.  It is only a 1 mile race so I am looking forward to really doing GREAT on it.  Stay tuned....

I actually saw the People Like Us promotion for free Sprinkles cupcakes on my Facebook newsfeed recently.  It just so happened that I was in the mood for a cupcake.  I mean, would there ever really be an instance where I wasn't in the mood for a cupcake?  I don't think so! :)  Anyway, I wanted to share the cupcake love with you fine folks because your opportunity to cash in on this spectacular treat is just around the corner.  Yes, there are MORE free Sprinkles cupcake days in the near future!!

Here is what you have to do:

Let me know how you feel about Sprinkles cupcakes.  I am liking them more and more each time I try a new flavor.  Interested to hear your thoughts!

In the past few weeks, Chris and I saw a couple of plays on Broadway with star studded casts - The Columnist and The Best Man.  Both were terrific plays!  Strangely enough one of the candidates in The Best Man alluded to The Columnist himself.  We thought that was pretty funny. 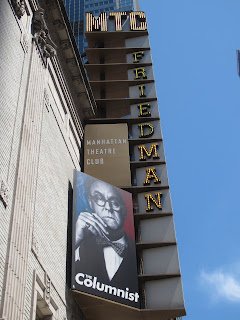 I'll start with my thoughts on The Columnist since we saw that one first.  Neither of us really knew what to expect exactly going into the show, but it turned out to be very enjoyable.  We had a general idea about the setting and main theme of the play, but neither of us had read much about it in advance.  We were both well aware that John Lithgow was the star.  In fact, this was probably the main reason we decided to go see it.  I am so glad that we did though.  There were only six characters in the play that was set in the 1960's just prior and just after the Kennedy administration. The Columnist is Mr. Joseph Alsop and we found out afterward that the play was pretty closely based on the actual life of this writer.  I particularly liked the set rotations. The acting was very good and there were a few little twists and turns along the way to keep it interesting.  It is extending for a few more months so go check it out if you have a chance.  You won't be disappointed!

A couple of weekends later we went to see The Best Man. 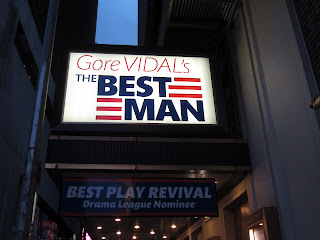 Not only was the show fantastic, but it was packed full of big names - James Earl Jones, Erik McCormack, Kerry Butler, Candice Bergen, Angela Lansbury, and John Larroquette.  There are some very fine actor/actresses on that list!  The show was very entertaining.  We got several great laughs out of it.  James Earl Jones plays a former President who is set to announce who he is supporting at the 1960 nominating convention in Philadelphia.  He visits the hotel rooms of both the Secretary William Russell (Larroquette) and Senator Joseph Cantwell (McCormack) for a chat prior to announcing who he will support.  Bergen and Butler play the respective wives of the two candidates and do so very well.  Lansbury plays Mrs. Sue Ellen Gamadge, a long standing spokeswoman for women near and far.  She was a hoot!  The twists and turns in this one leaving you hanging to the very end to see who is in fact The Best Man.  This one has also been extended so you have a few more months to check it out as well.

Not only are they great actors/actresses, but they are also very nice people.  They signed after the show as well.  I got both the candidates and their wives to sign my play bill with the exception of John Larroquette.  He was nursing a broken finger and wasn't able to sign that evening.  That was a bummer :(   Here are some pics from after the show...

If you are able to make it out to either show, ENJOY!!  Would love to hear your thoughts...