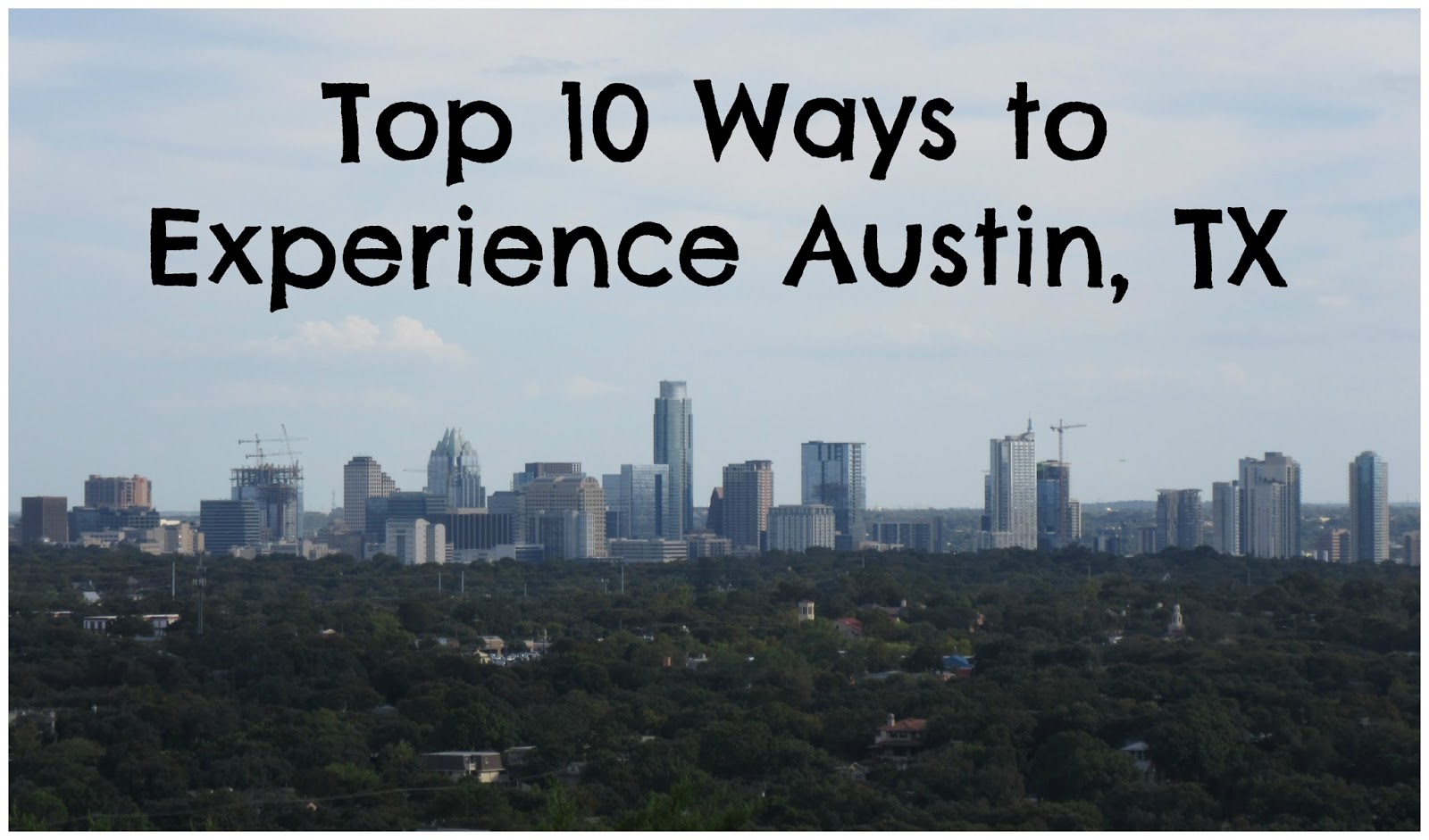 Austin is a unique and exciting place. After spending a week there for our anniversary, we highly recommend a visit to this growing city. We had adventure after adventure with lots of food and sweets in between. (Don't worry - those posts are up next!) We never felt stressed about time and managed to sleep in while still covering a lot of ground. Our time in Austin included five days and four nights - we made them all count! 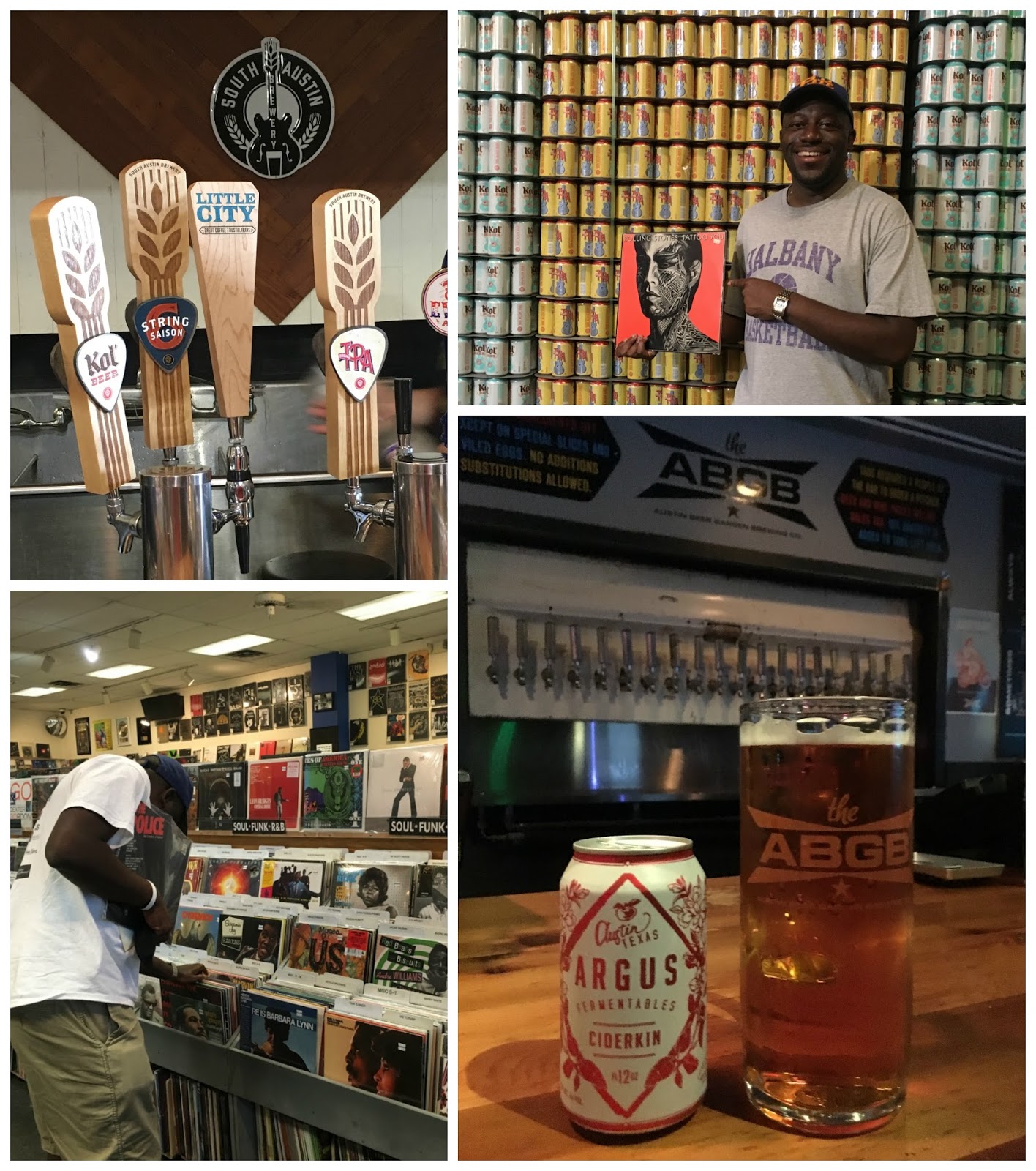 Our first stop in Austin was a local brewery that Chris wanted to check out. South Austin Brewery turned out to be a double win because they were also having a record sale. Later in the week, we also ventured over to Waterloo Records for additional record perusing. And swung by ABGB for a quick drink with the locals before we left Austin. 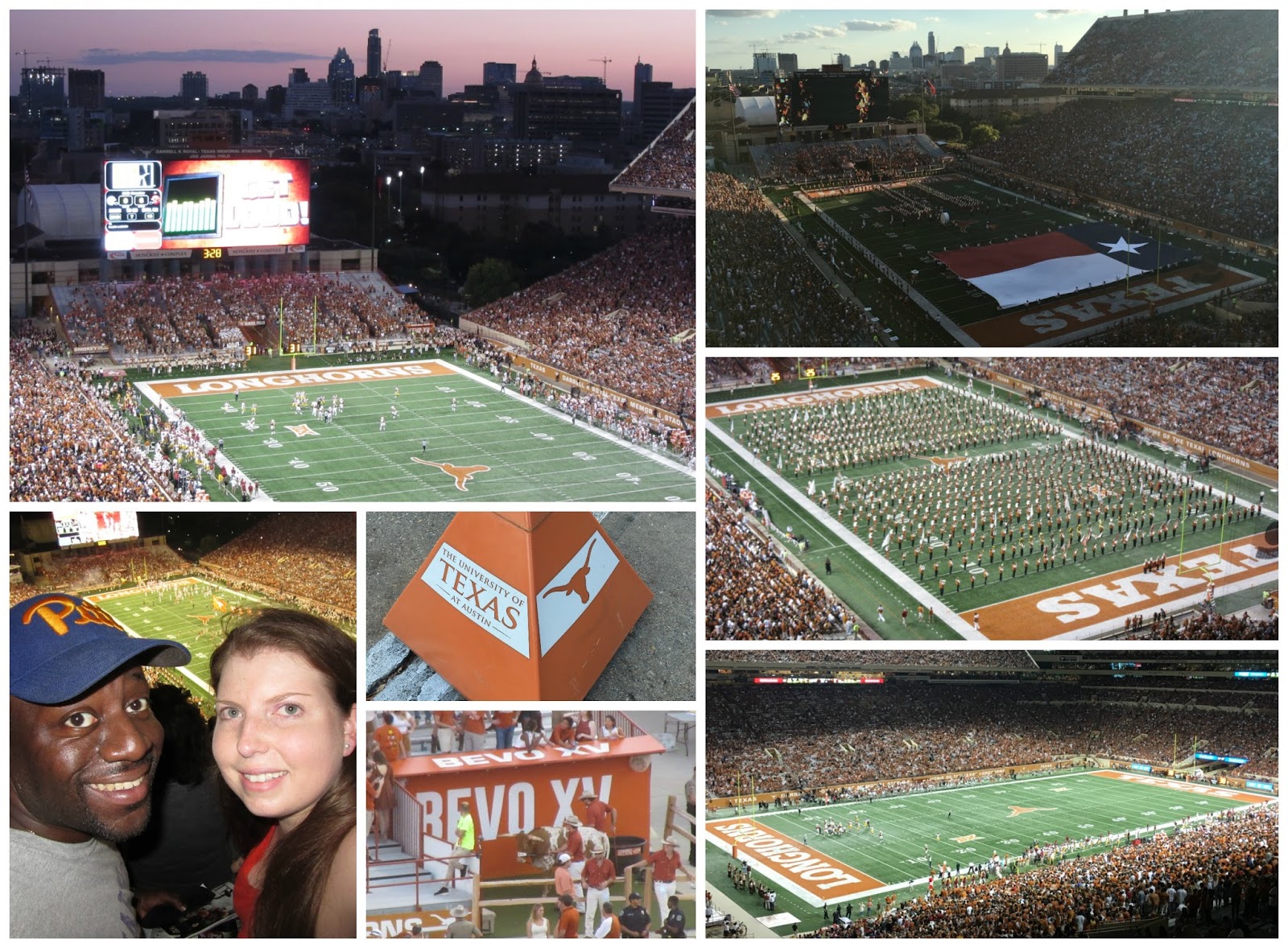 Everyone knows that Texas loves football. We hadn't originally planned to attend a Longhorns game, but the timing worked out with our schedule. The most impressive part of the game proved to be pre-game when the team rolled out a nearly 50-yard Texas flag and proceeded to sing the state song. WOW! Definitely never seen anything quite like that before. Texans sure are proud to be Texans. We also happened to be there on alumni band day so the halftime show proved an extra special treat as well.

We left the game a tad early in order to make it over to the Esther's Follies venue on 6th Street in time for the late show. Esther's Follies is a combination of comedic musical theater (think SNL skits set to music) and magic. The focus of the evening leaned heavily toward politics given it was an election year, but we really enjoyed the performance. Definitely a must-attend event! Afterward, we walked up and down 6th Street taking in the scene. Austin is known for its music scene and we were able to take in a bit of the eclectic music atmosphere as we wandered this Bourbon Street type environment. 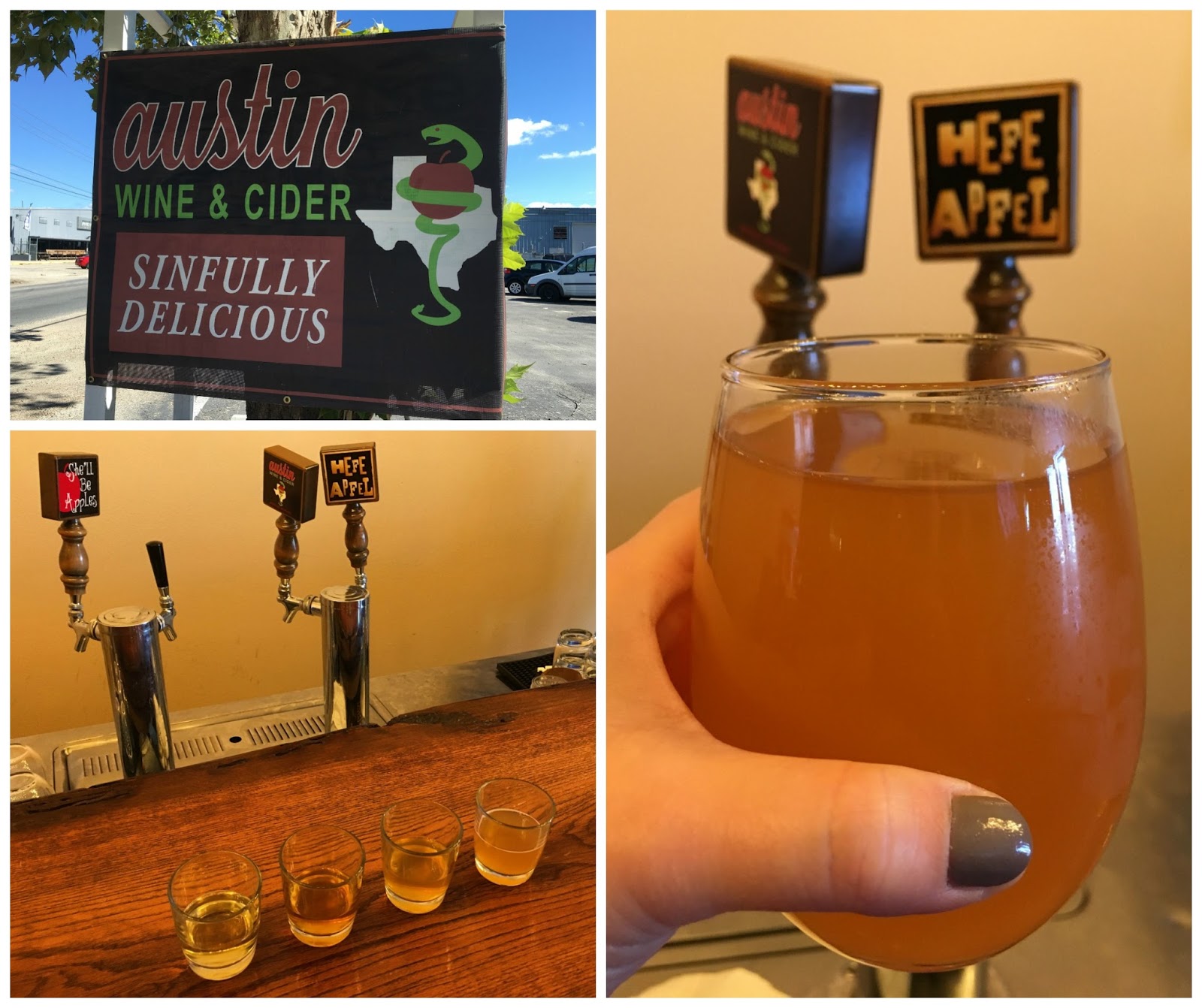 Chris found a brand new cider tasting room near our South Austin hotel location. We spent a good portion of the afternoon visiting with the owner, Mike, and trying his four different ciders. It was practically a private tasting since no one else arrived until about 15 minutes before we departed. Surprisingly, I liked Hefe Apfel cider best. The tasting was great, but the company even better - there's nothing like chatting with a local. If you live in or visit the Austin area, stop in Austin Wine & Cider for a drink and tell Mike we said hello! 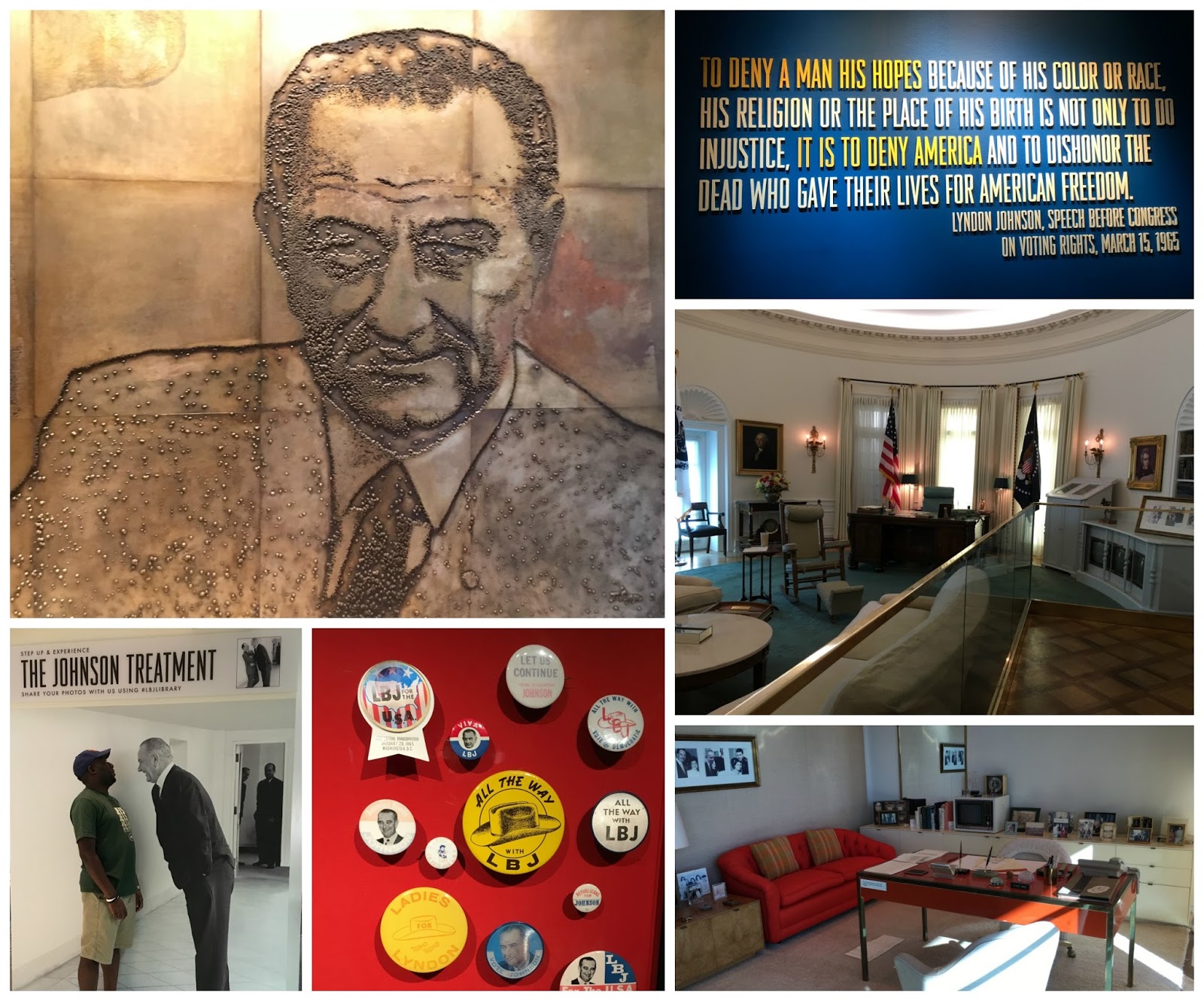 The number one item on Chris' things to do in Austin list was visit the LBJ Presidential Library and Museum. I left amazed by the volume of communications and information on display. We both could have stayed there all day. The most fascinating part of the museum proved the recorded phone conversations.  There were stations set up throughout the various levels of the museum where you could listen to phone conversations between LBJ and J. Edgar Hoover, MLK, Jr., Lady Bird, incoming President-elect Nixon, various Senators, and so many others. I was completely hooked. Chris and I went to see All The Way on Broadway a couple years ago so a chunk of the info was quite familiar, but we were still engrossed in all the details and artifacts. The museum was easily the most interesting place we encountered on our visit. It is certainly worth a look (and listen)! 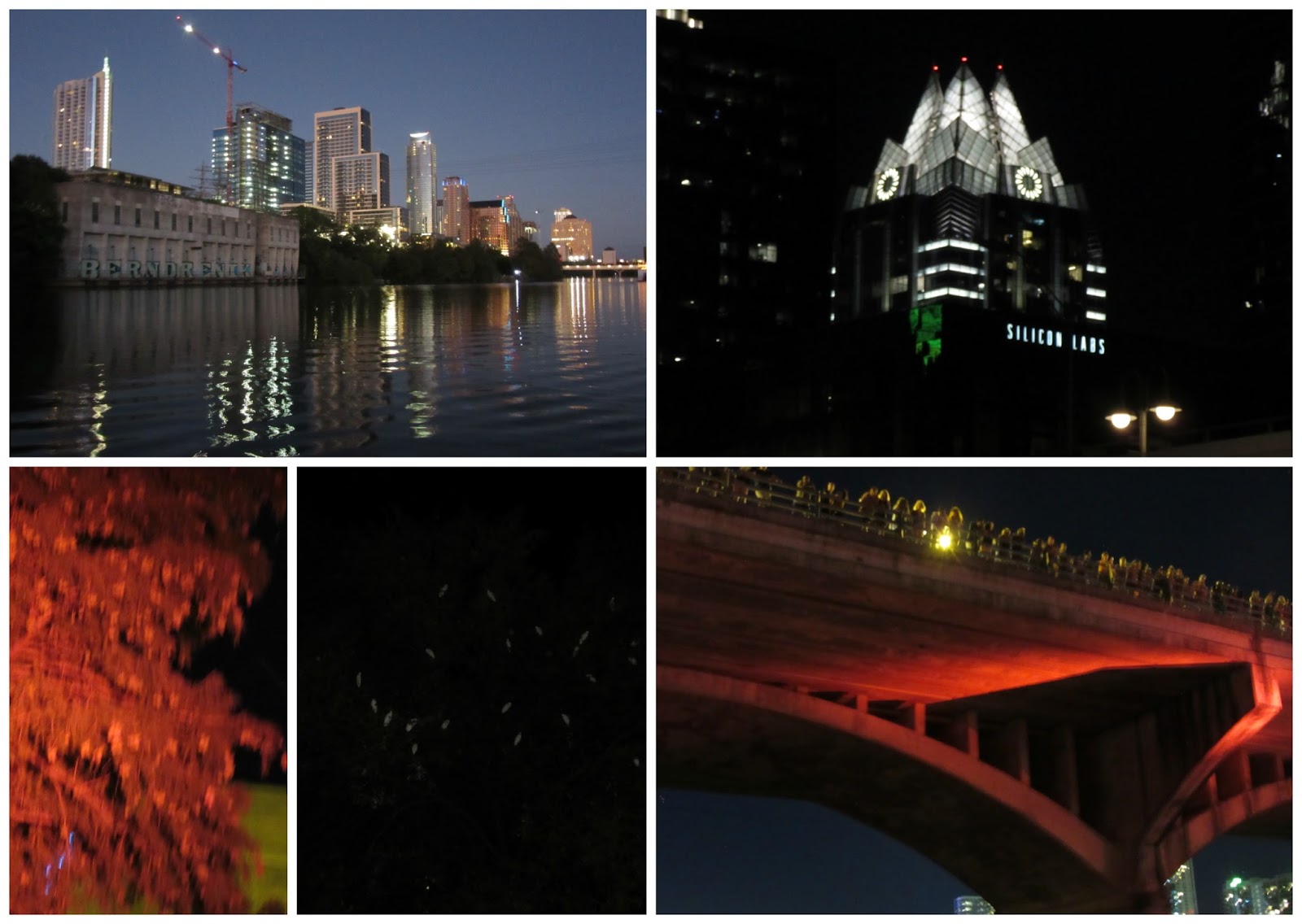 I had heard mixed reviews regarding the Austin Bat Tour before we made our plans. As it turns out, the tour is a great way to learn more about the history and growth of Austin. The first hour of the tour was a sunset cruise on the lake with a humorous and engaging commentary on the skyline buildings and area. This portion was far more interesting than the actual bat watching portion. We definitely saw the bats. Perhaps about a million of them. Seriously, it was a tad unnerving how many of them just live in the crevices of the bridge. After about five minutes of seeing these tiny creatures fly back and forth between the bridge and a nearby tree, I was ready to head out. I would say skip this, but the sunset cruise portion was really neat and informative. Also, please note that opting to stand on the bridge and watch the bats for free will NOT give you the proper angle to see anything. If you are willing to make the trek over to the bridge, definitely go ahead and book the boat tour. 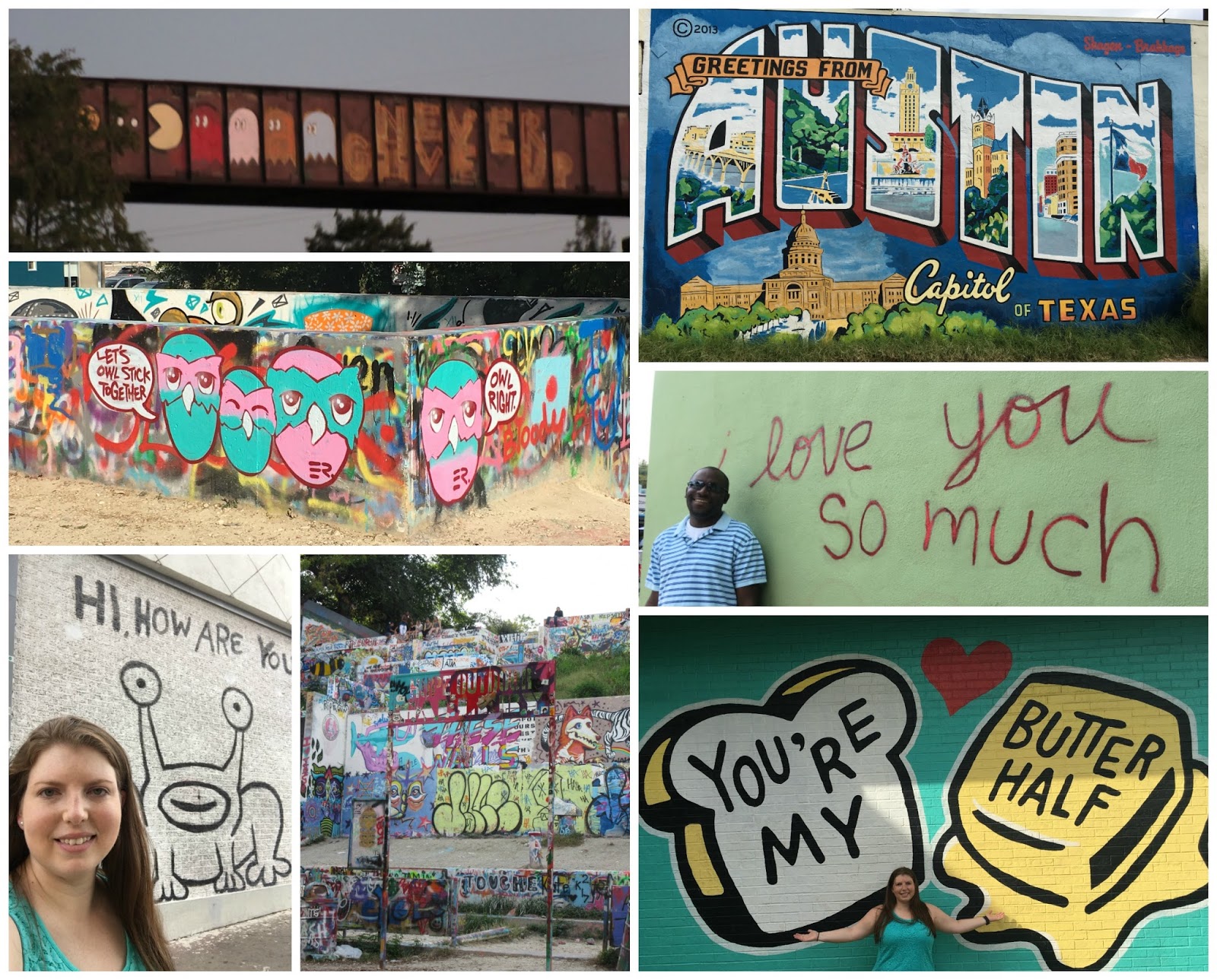 As a blogger, I have seen Austin murals (particularly the I love you so much one) for years now. I was beyond excited to be able to drive around and find them with Chris. He was decidedly less excited, but since it was our anniversary he played along nicely. It was fun to spot them, but since we were playing tourist on a random Tuesday it was much more difficult to find a photographer. We made the best of it though. We even found a graffiti park along the way. 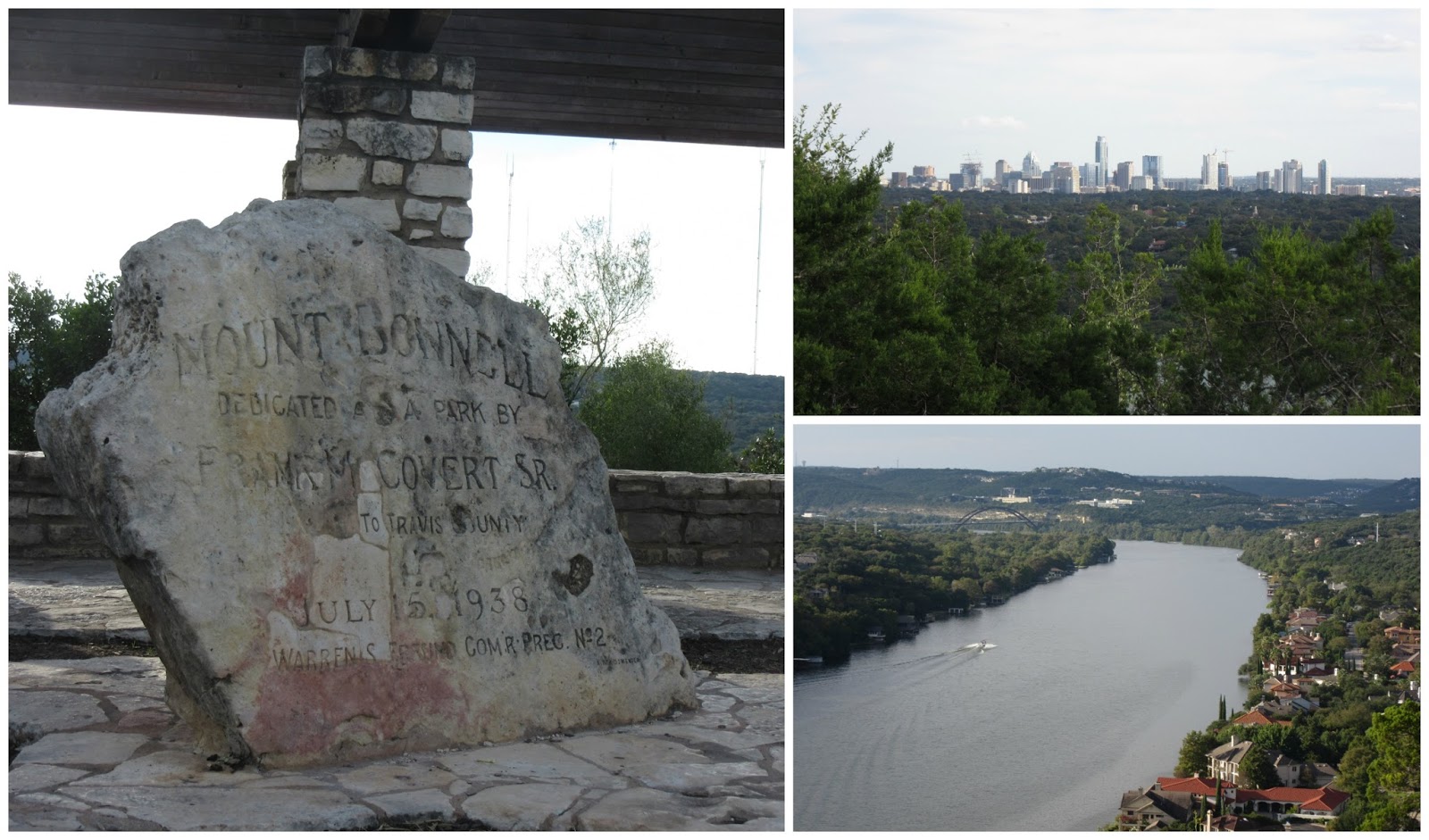 A local recommended Mount Bonnell to us. While it didn't blow us away like we were expecting it might, we did enjoy the opportunity to see the city from a different vantage point.  I can imagine it is beautiful during sunrise and sunset. We didn't spend much time here, but I'd glad we made the trek up to check it out. 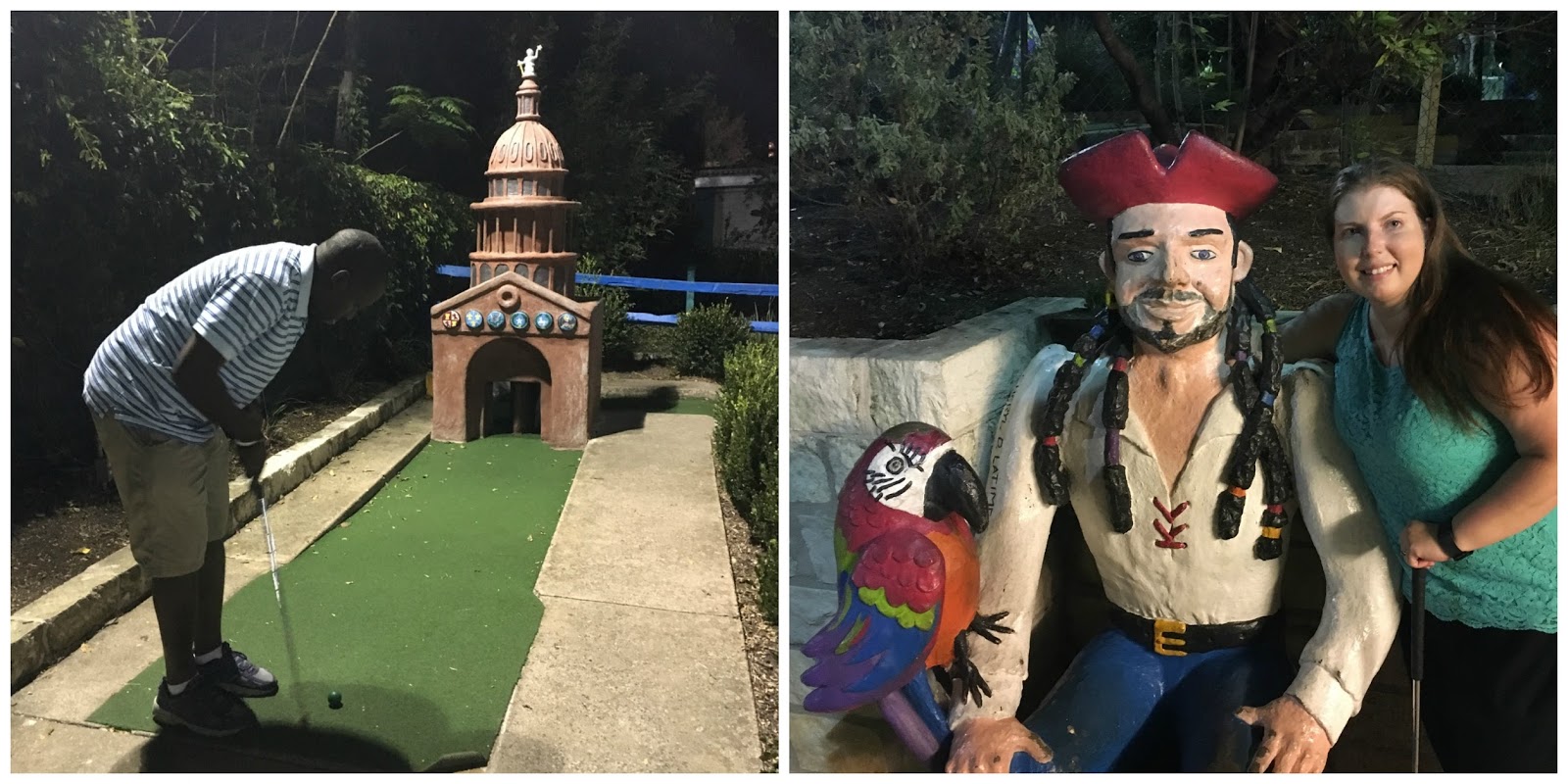 After our delicious anniversary dinner, we stopped by a mini-golf location that we had seen open the night before. It was inexpensive to play both courses (18 holes each) and as we discovered halfway through our first game it was also BYOB. The course seemed to be a popular spot for both couples and groups celebrating a birthday. One course was more challenging than the other and we split wins. Definitely a fun way to end the evening. 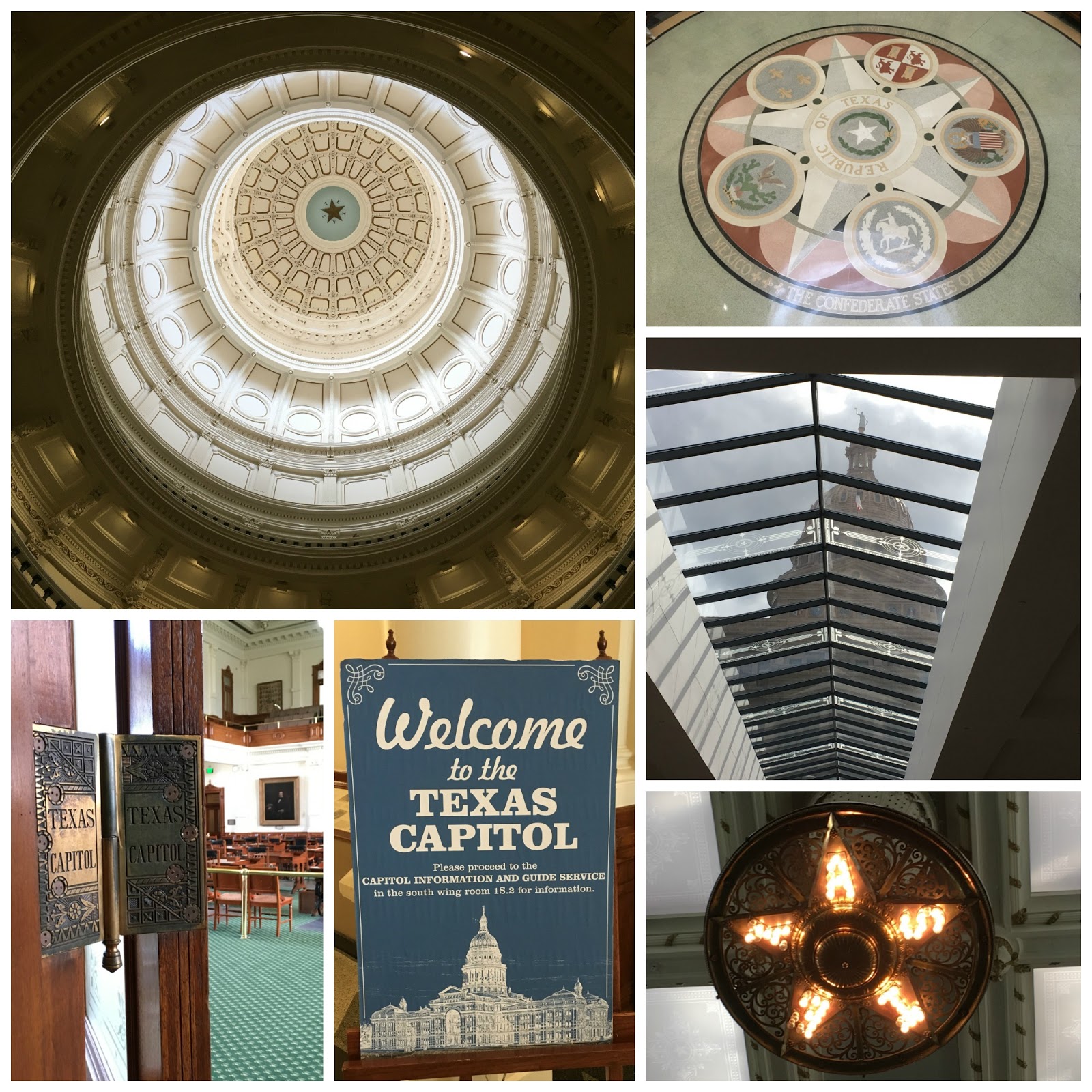 Finally, let me recommend a free tour of the Capitol Building. They run on the half hour. We enjoyed learning more about the history of Texas and how their state government operates. The building has some beautiful design work throughout as well.


Have you ever experienced Austin?
What did we miss?