Mini of the Month: August

I was SO disappointed when I found out that the August Mini of the Month was a repeat from March. 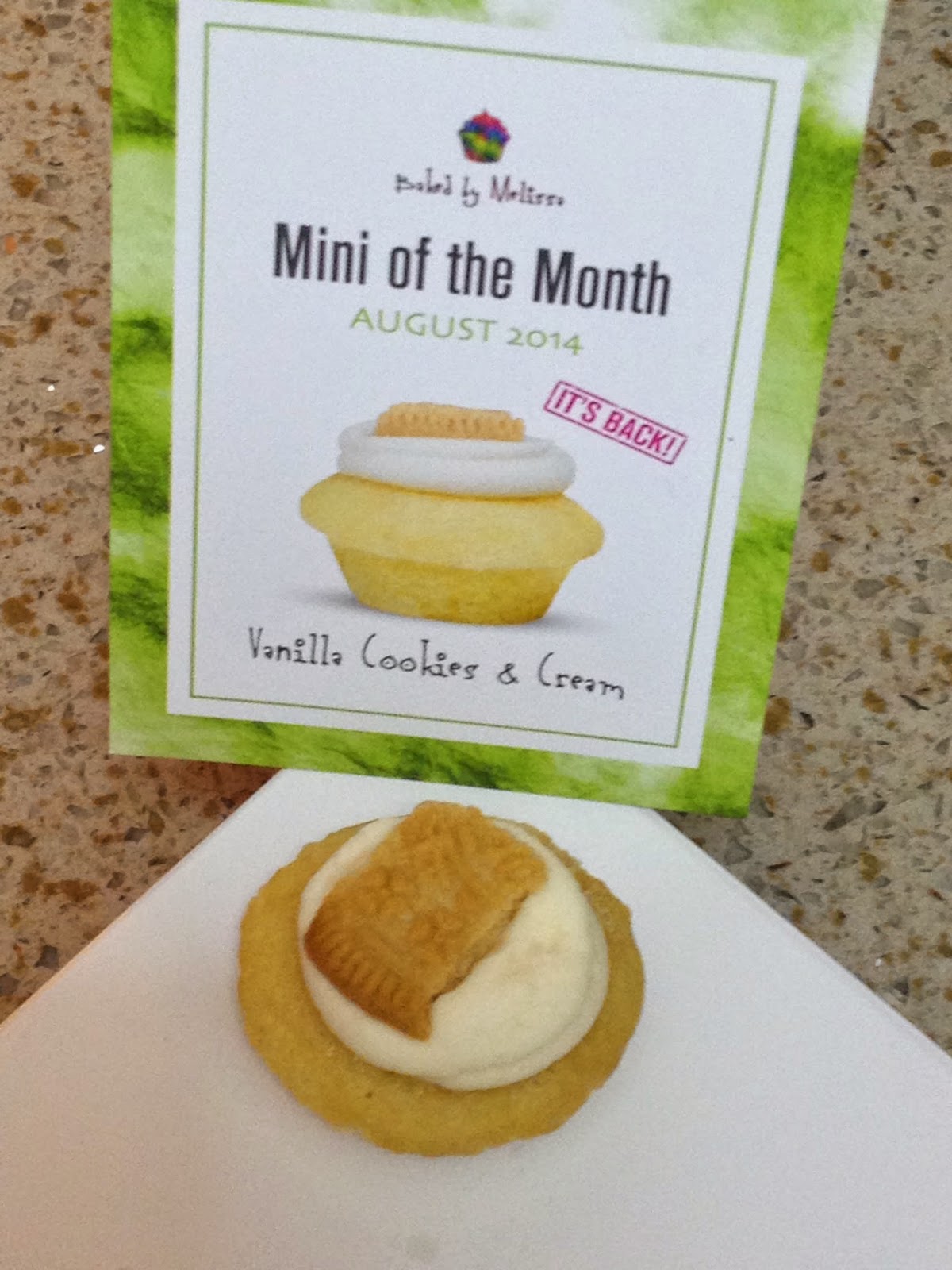 I mean I loved the cupcake so that wasn't the issue.  It was just a big let down when the cupcake wasn't something new!  Baked by Melissa allows the public to vote on the mini of the month for January and August.  I'm surprised people voted to bring something back that had been out so recently, but I guess that's what the people wanted!  Looking forward to something new and different in September!!


Hope you all are having a wonderful Labor Day weekend!!

Runners Tell All: My Training Plan

I missed out on July, but I am happy to be back for the Runners Tell All link up with Amanda and Beka this month!

Training has never really been my thing.  I didn't like practicing piano when I was younger.  And I absolutely despised basketball practice.  Not sure why, but I always just preferred to turn it up on game day.  No practice needed here!

And then I started running.  Training is a pretty important part of the whole running scene.  I still don't like it...and even found out recently that I ran faster when I simply cross trained instead of going on practice runs prior to one of my races in early June.  Regardless, I know that training is an important part of running.  So, I struggle through it when I have long races on the horizon.

My plan usually consists of figuring out how many weeks I am able to devote to training and then finding an online guide that best fits that time frame.  I typically tweek the online guide to fit my schedule and then do my best to stick with it.  This worked particularly well for the NYC Half back in March.  I had limited time to train, but put together a plan that involved three short runs and one long run each week along with a boot camp day for cross training purposes.  I set a PR at the race so it must have worked for me!

I've learned that the most important part of training is listening to your body.  When I began training for the NYC Marathon last year, I was determined to hit all the runs on my training schedule and wore myself down pretty quickly in the process.  About halfway into training, I realized that sometimes running two miles less or taking a rest day altogether is exactly what is needed.  I've found it works best for me to stick fairly close to a schedule, but to also allow myself some flexibility.

What works best for you in regarding to training for races??

I've always claimed two men as my favorite actors.  There is a third that I absolutely adore, but the original two were there from the beginning for me.  I've had celebrity crushes and other actors that I admired as I grew older, but my two favorites from the start were always Robin Williams and Tom Hanks. 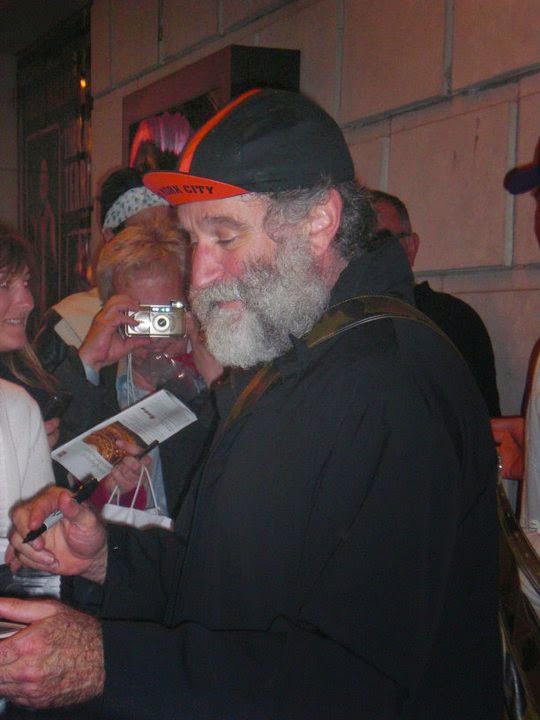 Hearing the devastating news that Robin took his life earlier this week has taken a bit to sink in with me.  I wanted to know all the facts and read more about his story before I formulated my thoughts.  For some reason, I thought it would make a difference...but it really hasn't.

I have loved so many of Robin's movies over the years.  And even tried to make it through the full season of The Crazy Ones last fall.  I think I got about halfway through the season before I just had to pass on it, but the ONLY reason I tuned in to begin with was Robin.

I hadn't had a chance to share it with all of you because it happened pre-blog, but back in the Spring of 2011 I actually met Robin.  My brother and sister-in-law came to New York for a visit and we went to see Bengal Tiger at the Baghdad Zoo staring Robin Williams as none other than the tiger. 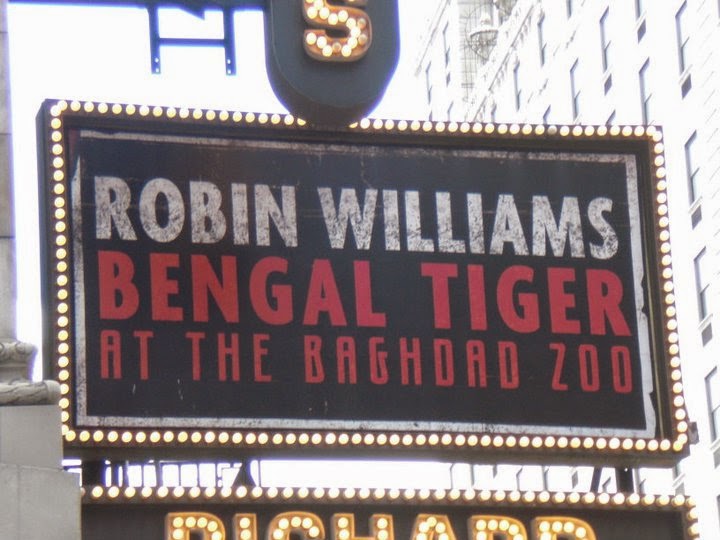 He was great though the show was quite bizarre and not quite my cup of tea.  I was ecstatic when Robin said "sure" after I asked him if I could take a photo with him.  He didn't say much more than sure to the multitude of requests and I must admit I felt a little sad that he wasn't the animated character that I always imagined him to be.  He was agreeable for certain, but I didn't really get a glimpse into who he really was...or maybe I did. 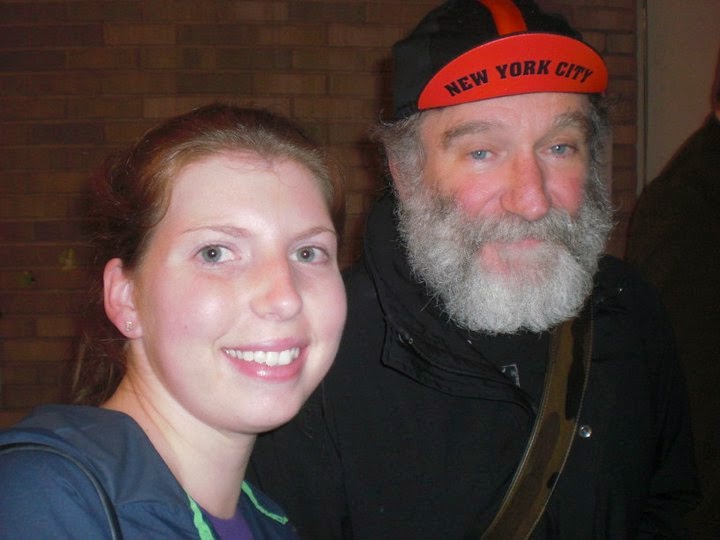 Either way, I still loved his movies and watched them any chance I had.  No matter who Robin Williams was underneath all the layers the public knew, I am positive of one thing - his talent brought joy to the masses.  And it's sad he isn't around to continue doing that any longer... 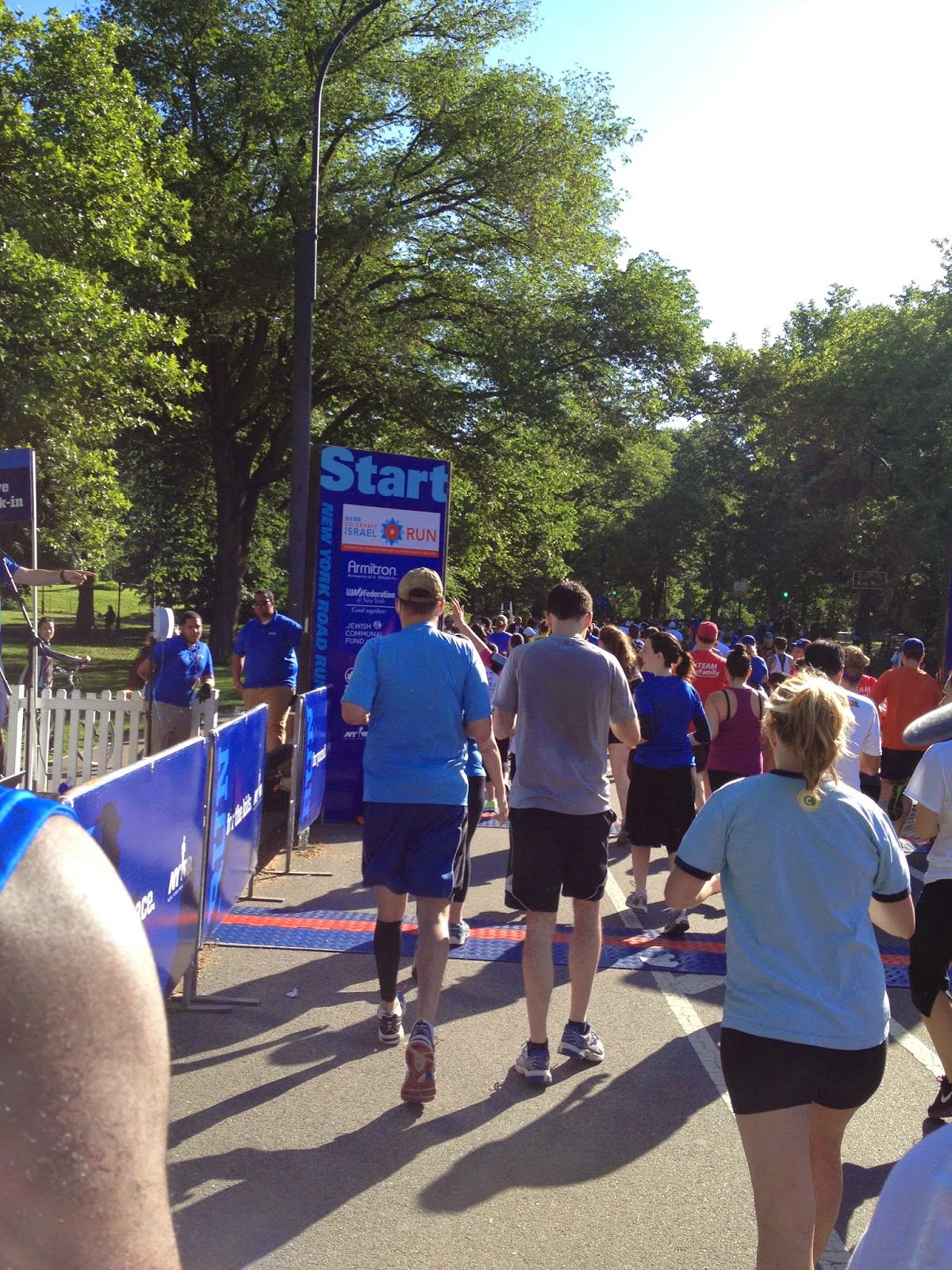 The race (much like my upcoming one this weekend) came on the heels of an extremely busy few weeks.  I hadn't been running much at all and wasn't too sure what to expect when I lined up in the corrals that early June morning.  I had just fairly successfully completed the 4-week Fit Challenge though. And the weather was just right.

Having that bit of background, you will be as shocked as I was to hear that this run was one of my best ever.  I think it was a mixture of the core training from the challenge and the fresh legs that helped me to hit a time that made me super proud!  I ran 11:37 per mile for a total time of 46:26.  My best ever time for a 4 miler was 11:35 per mile and that was with two of my friends pushing me the whole race.  Needless to say, I was SO proud of my efforts.  And to top it all off, I didn't feel exhausted at the end of the race like I so often do.  I really showed me the power of cross-training and core training. 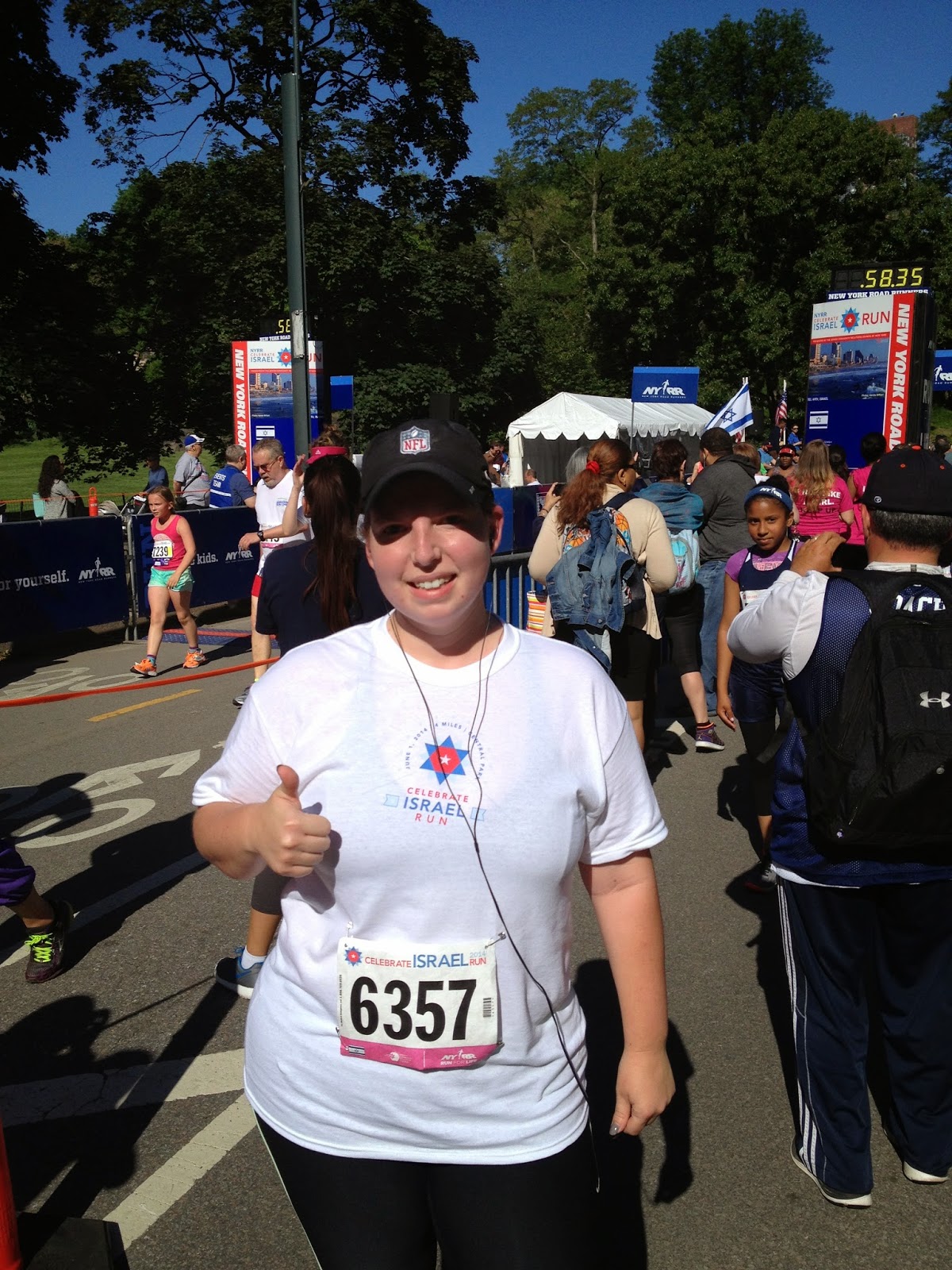 What is your favorite way to cross train during running season? 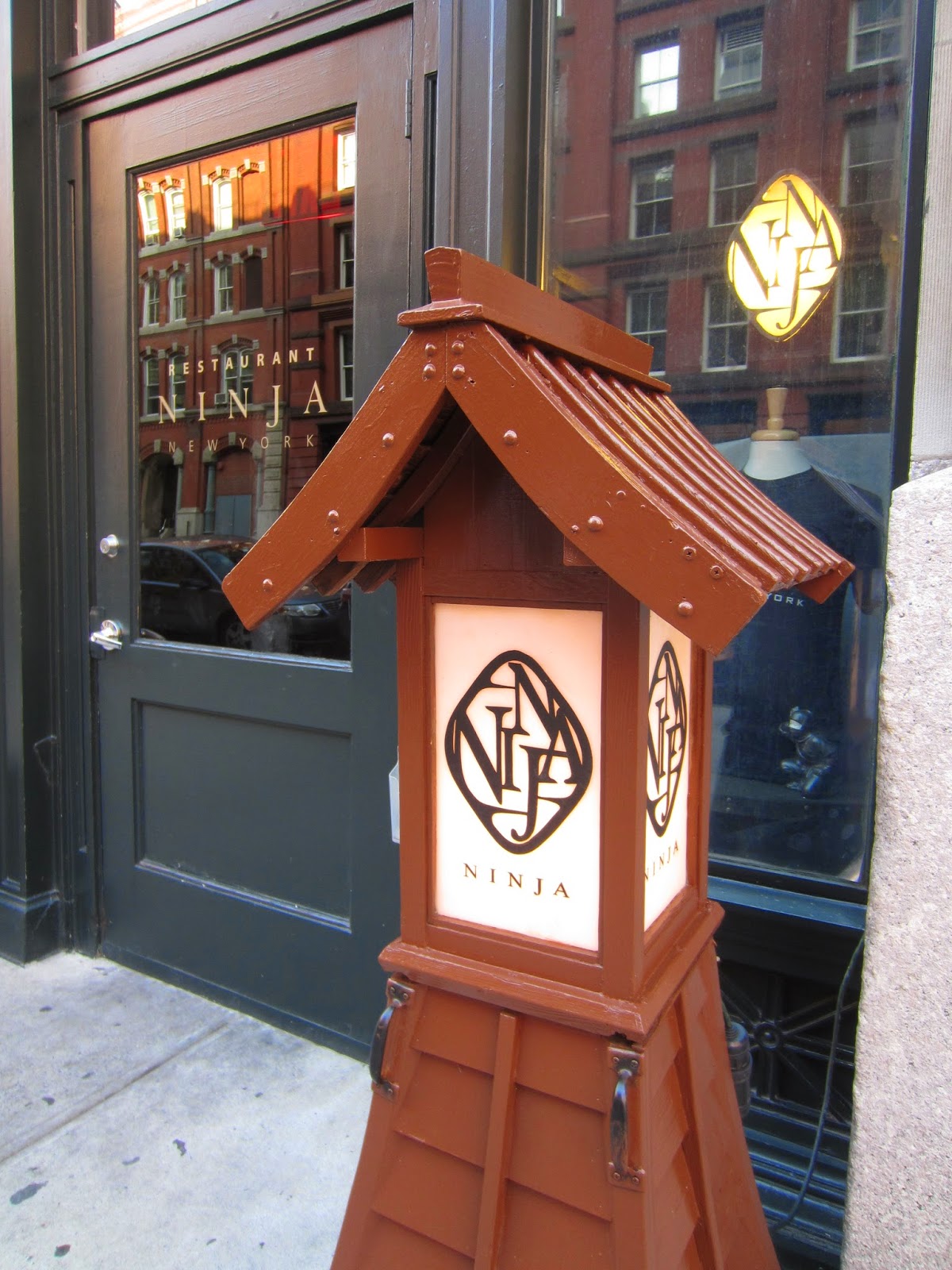 A friend recommended Christopher and I give Ninja New York a try for my birthday dinner.  They had a fun experience there and thought we would enjoy it as well.  They have never been more right!  We loved it!!  And the food is spectacular!!

After a quick elevator ride down to the ninja headquarters we weaved toward our individual little hut.  Our server, Ninja Chris, greeted us and got us started with a flavored sake set.  I thought the strawberry sake was the best, but also liked the orange one.  Lemon was ok, but plum was terrible! 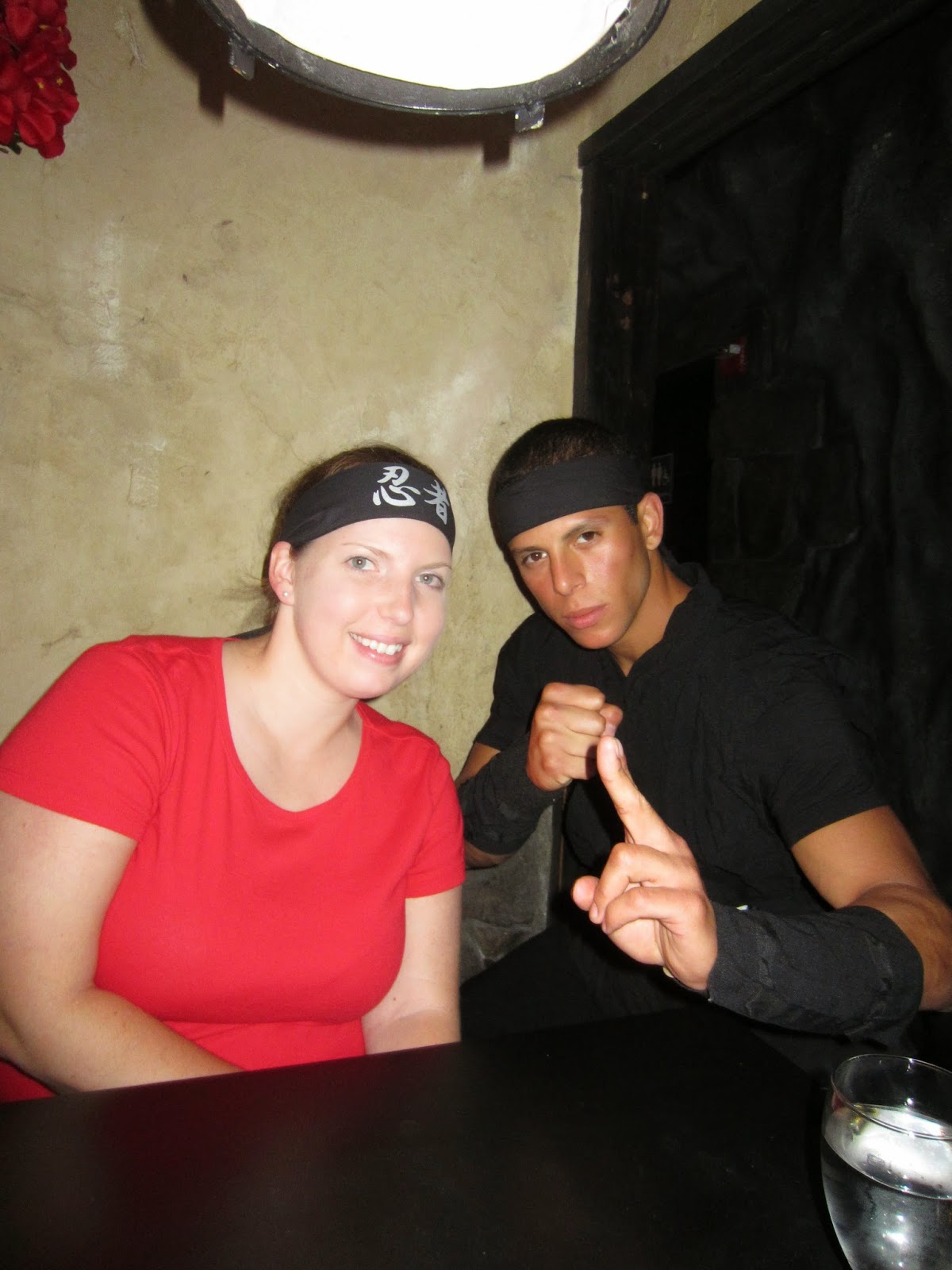 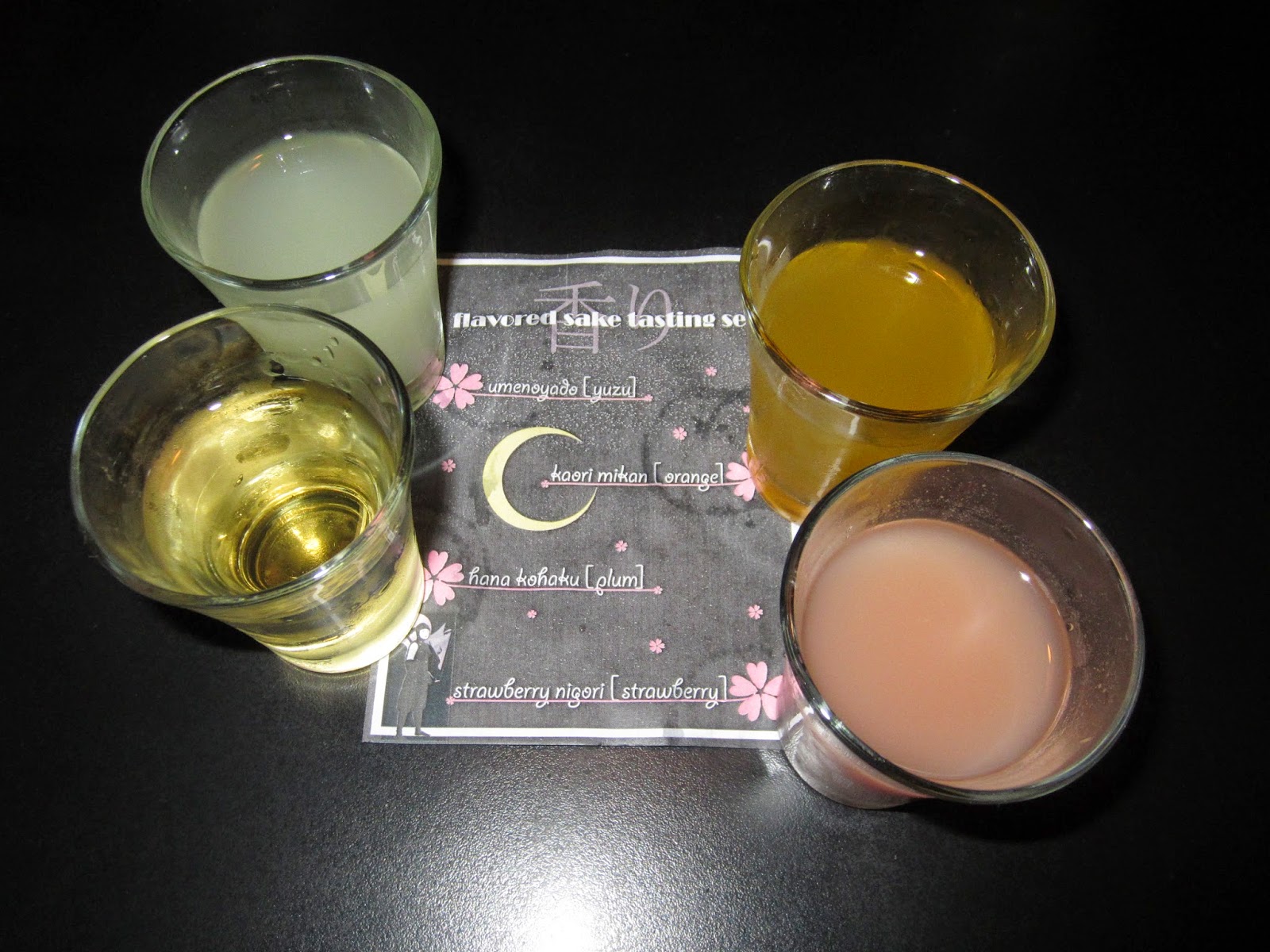 Next, we moved to appetizers.  Each of ours had a fun twist to it.  Mine proved a bit scary even!

Dinner was next.  It did not disappoint!  We both ordered the chicken teriyaki with vegetables.  It was without a doubt one of the best meals I have had in quite some time! 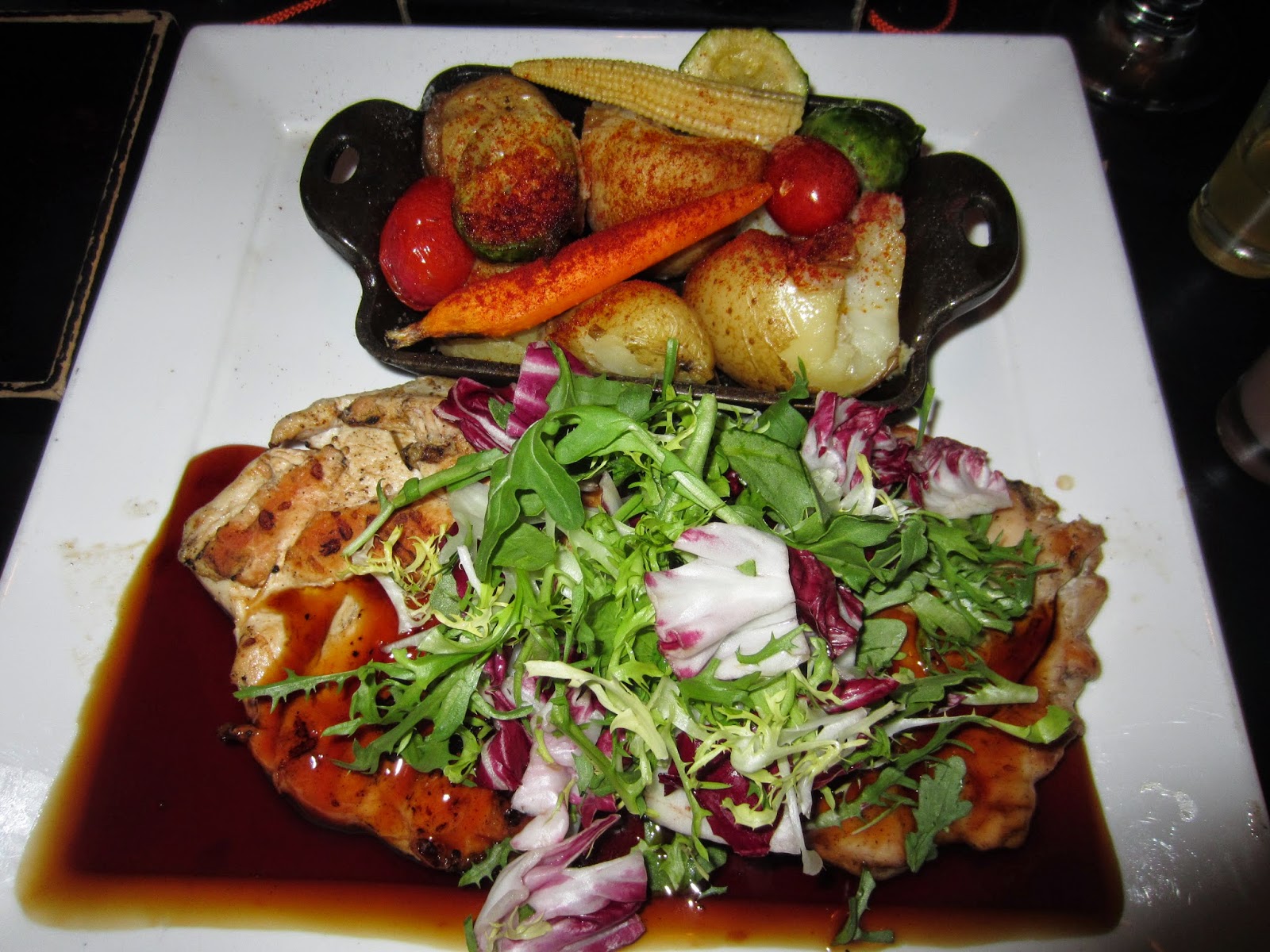 Dessert was another round of fun excitement!  Chris ordered the Ninja Star while I chose A Rose.  Both had super cool presentations and were delicious!  They actually cooked the Ninja Star right in front of us at the table.  Very fun stuff!! 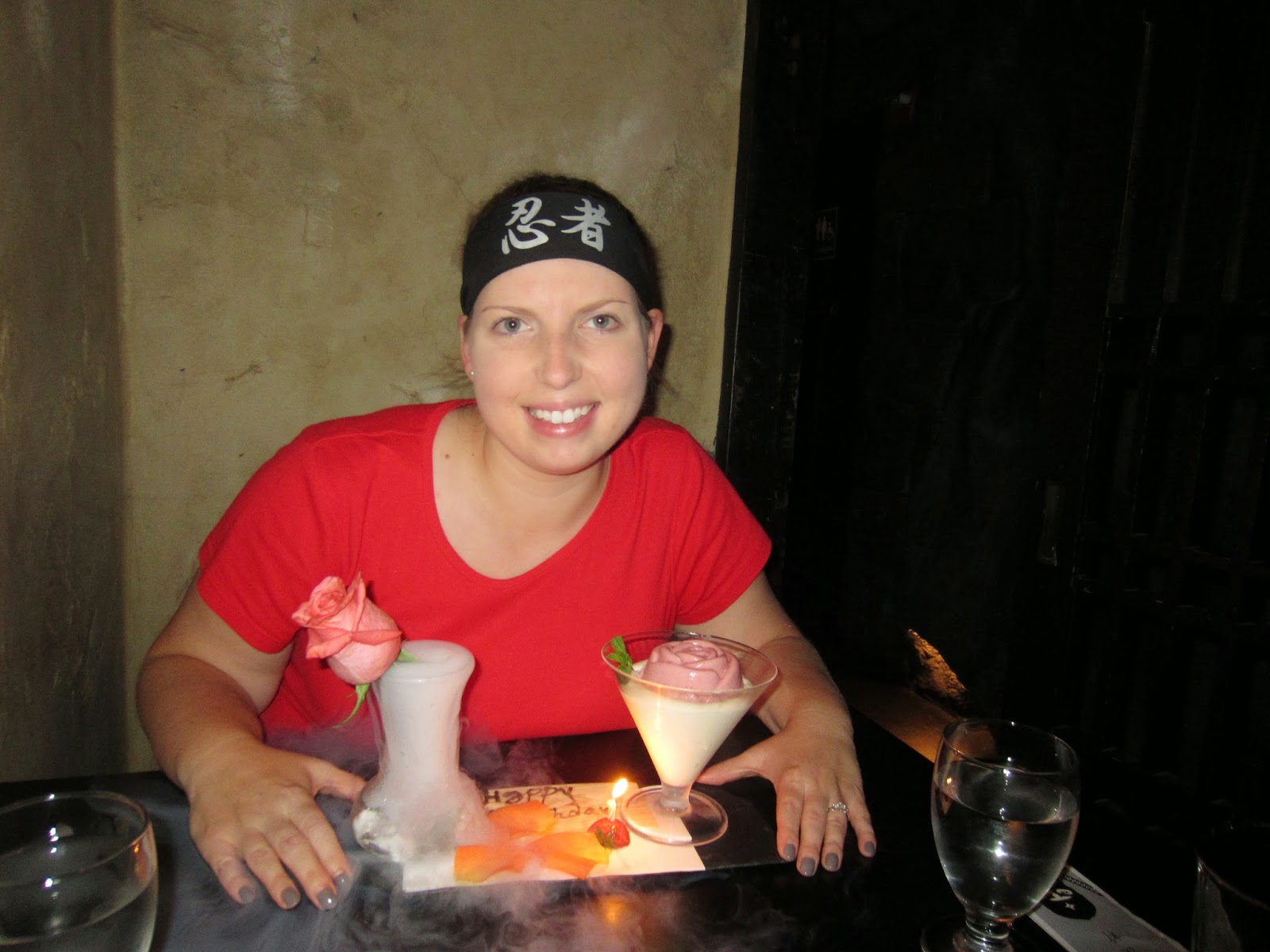 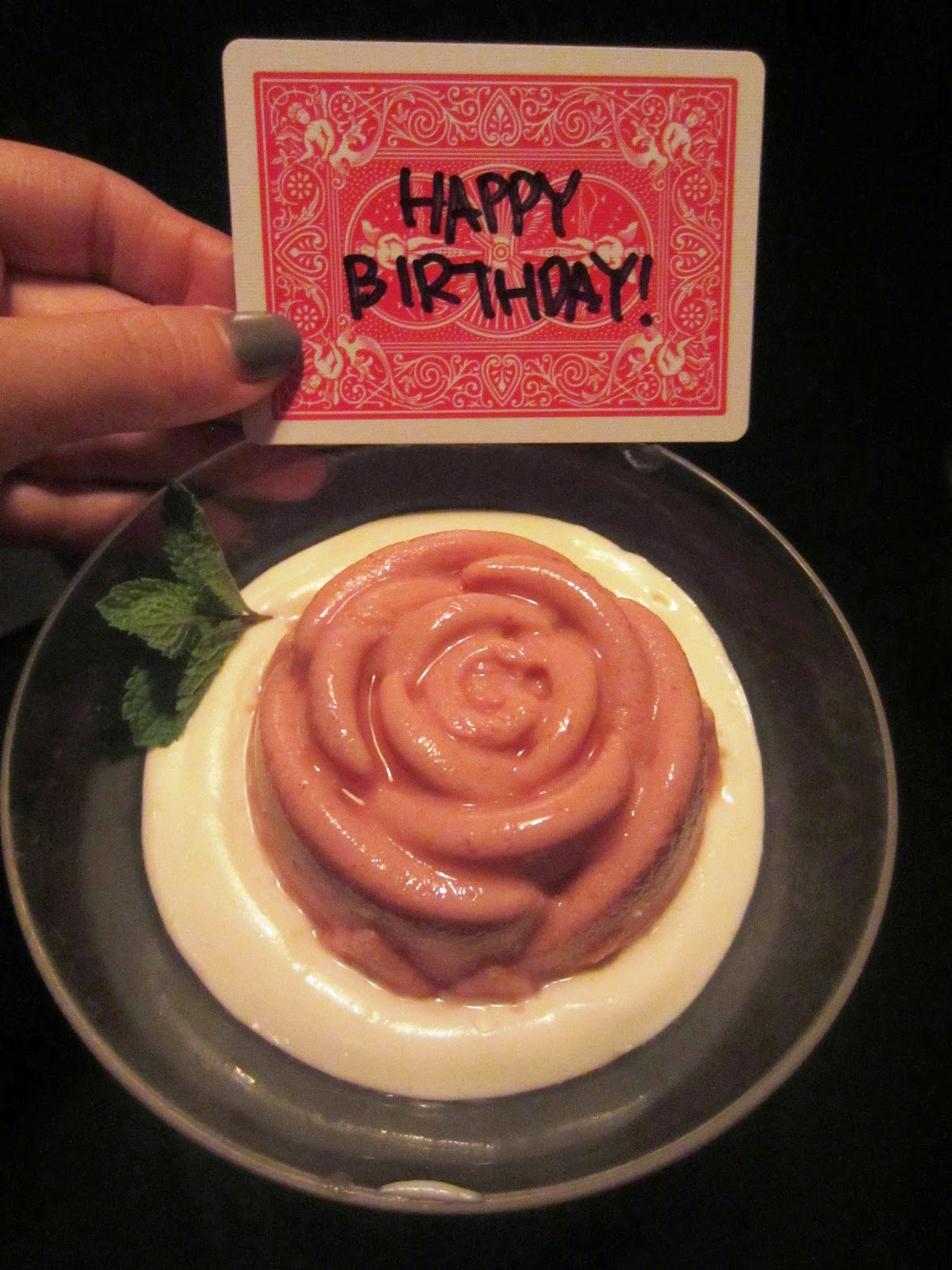 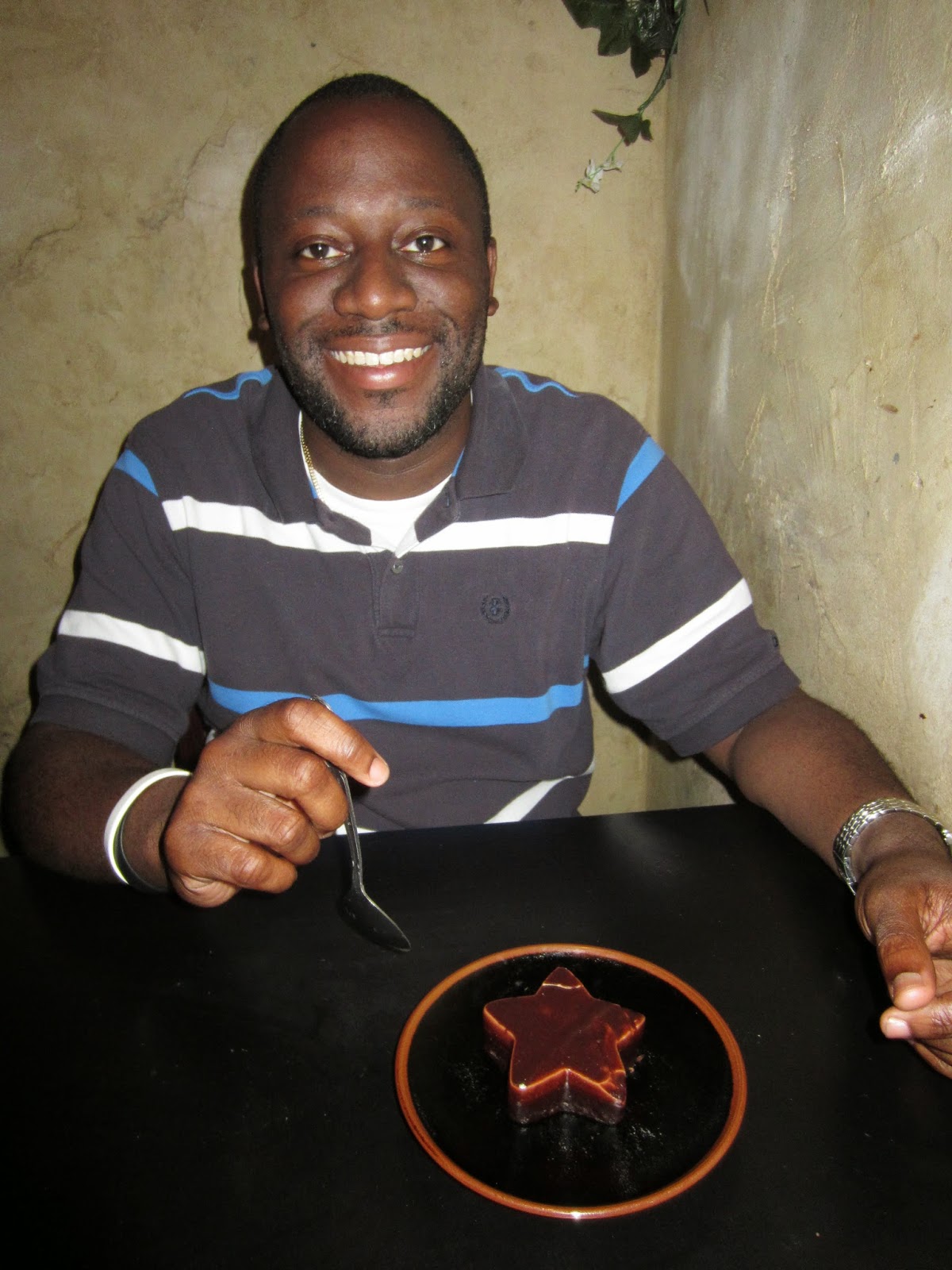 During dessert, a magician came around to our hut and performed some tricks for us.  He had me choose a card and write my name on one side of it, then put it back in the deck and it magically appeared with the other side saying HAPPY BIRTHDAY on it.  It was unbelievable.  He did several other really neat tricks before he headed off to another table. 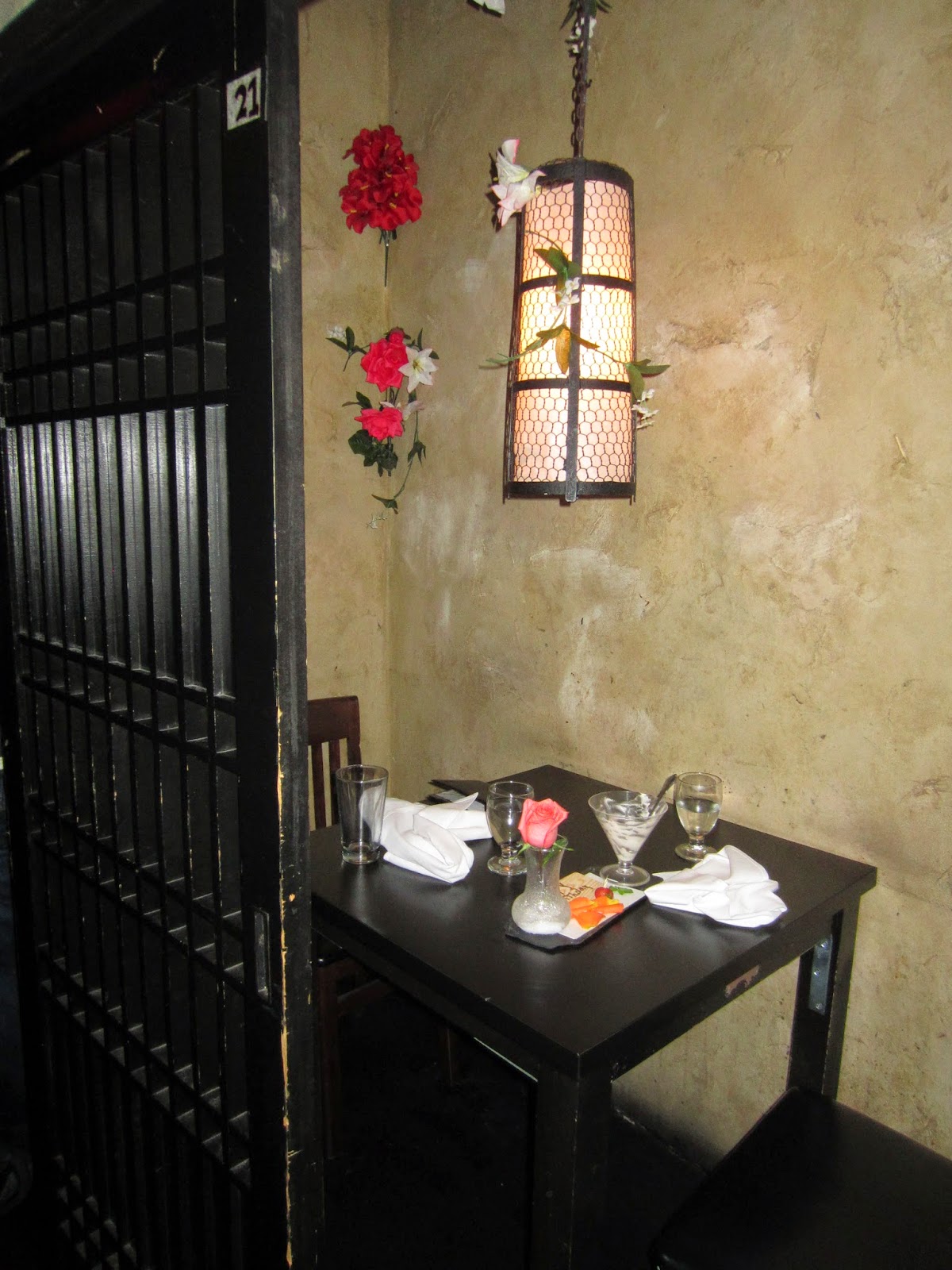 We had a great experience at Ninja New York.  I would highly recommend it to anyone...especially if they are celebrating a birthday or anniversary.  It is also a fun place for a family with younger kids.  Lots of families were there and all the kids were just loving everything!!


Have you ever been to an interactive dinner restaurant??  Did you enjoy it??