Happy World Penguin Day!! Perfect planning on Christopher's part since he surprised me with an awesome penguin encounter at the Mystic Aquarium this weekend.  We had a wonderful experience with our new penguin friend. 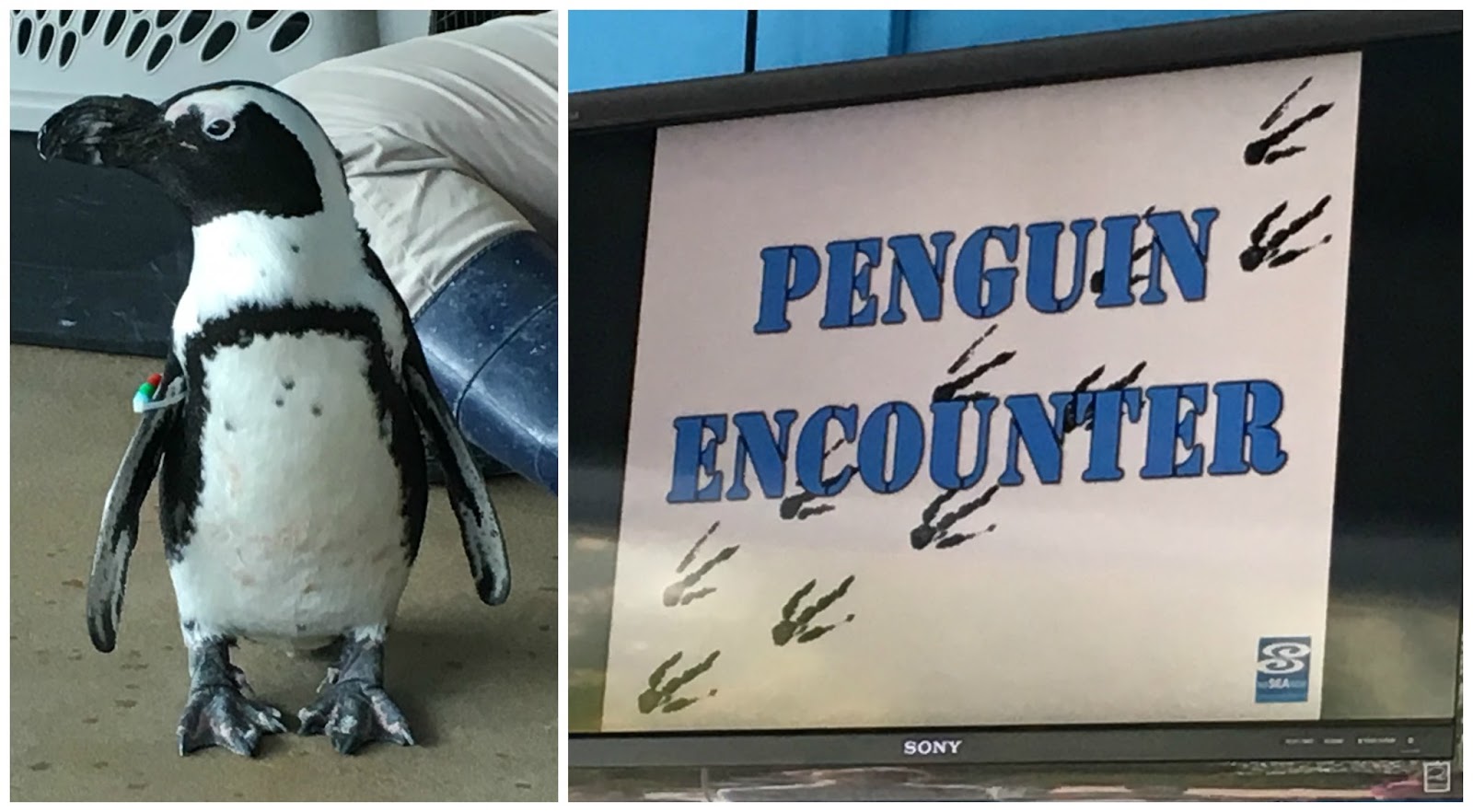 We learned A LOT about penguins during our hour long encounter.  We were also able to pet Mr. Penguin.  And help the aquarium with some training by playing pretend veterinarian! 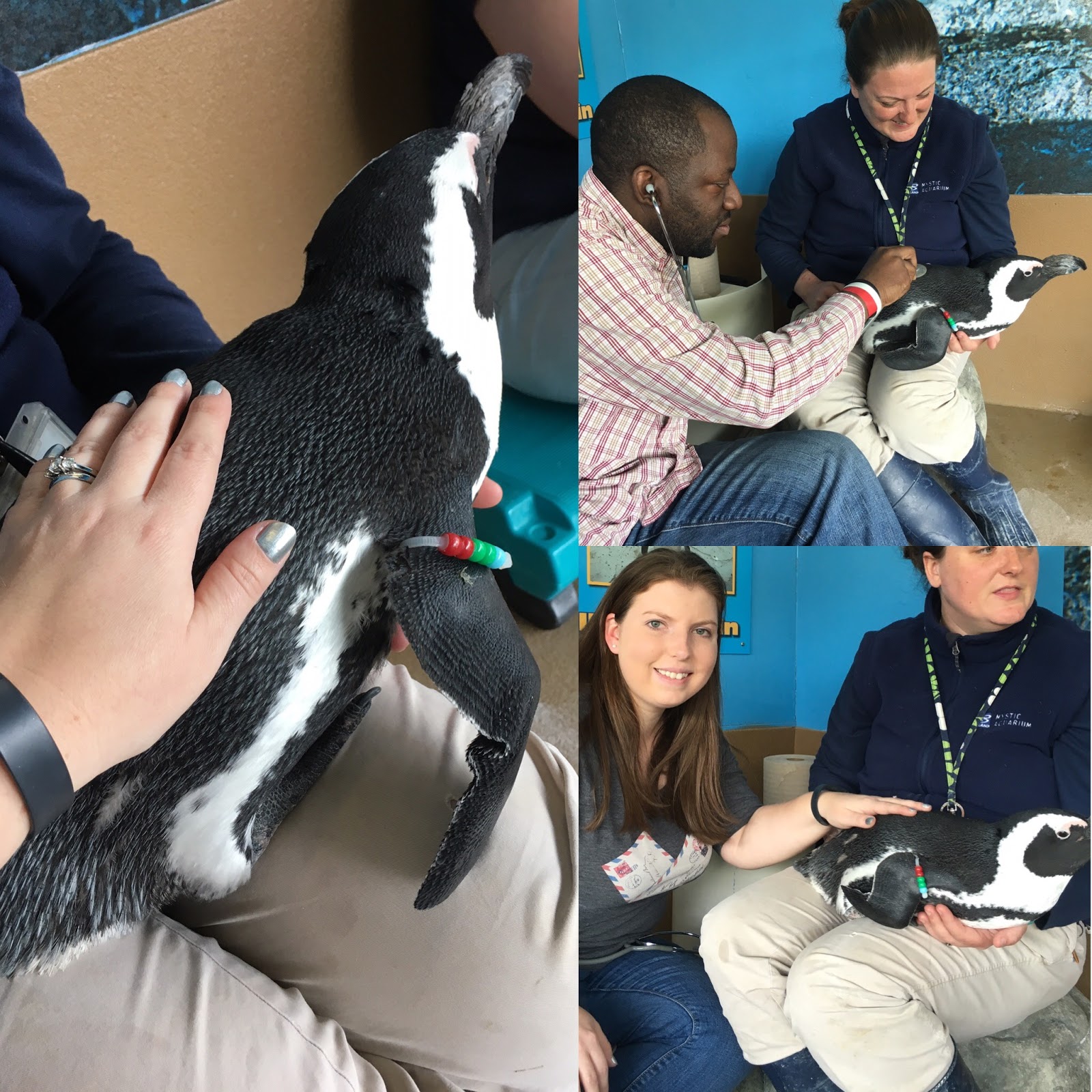 The most interesting portion of the day involved learning about the naming system for the penguins at the aquarium.  They are named using beads attached to one of their flippers.  The first bead is either blue or pink and indicates gender.  Gender can't be known by looking at the external body of the penguin.  It requires a blood test that occurs within the first year of the penguin's life.  The Mystic Aquarium assigns each penguin a two color name based on when they arrived at the aquarium.  Our penguin's name was Green Red because he was the 30th penguin at the aquarium. 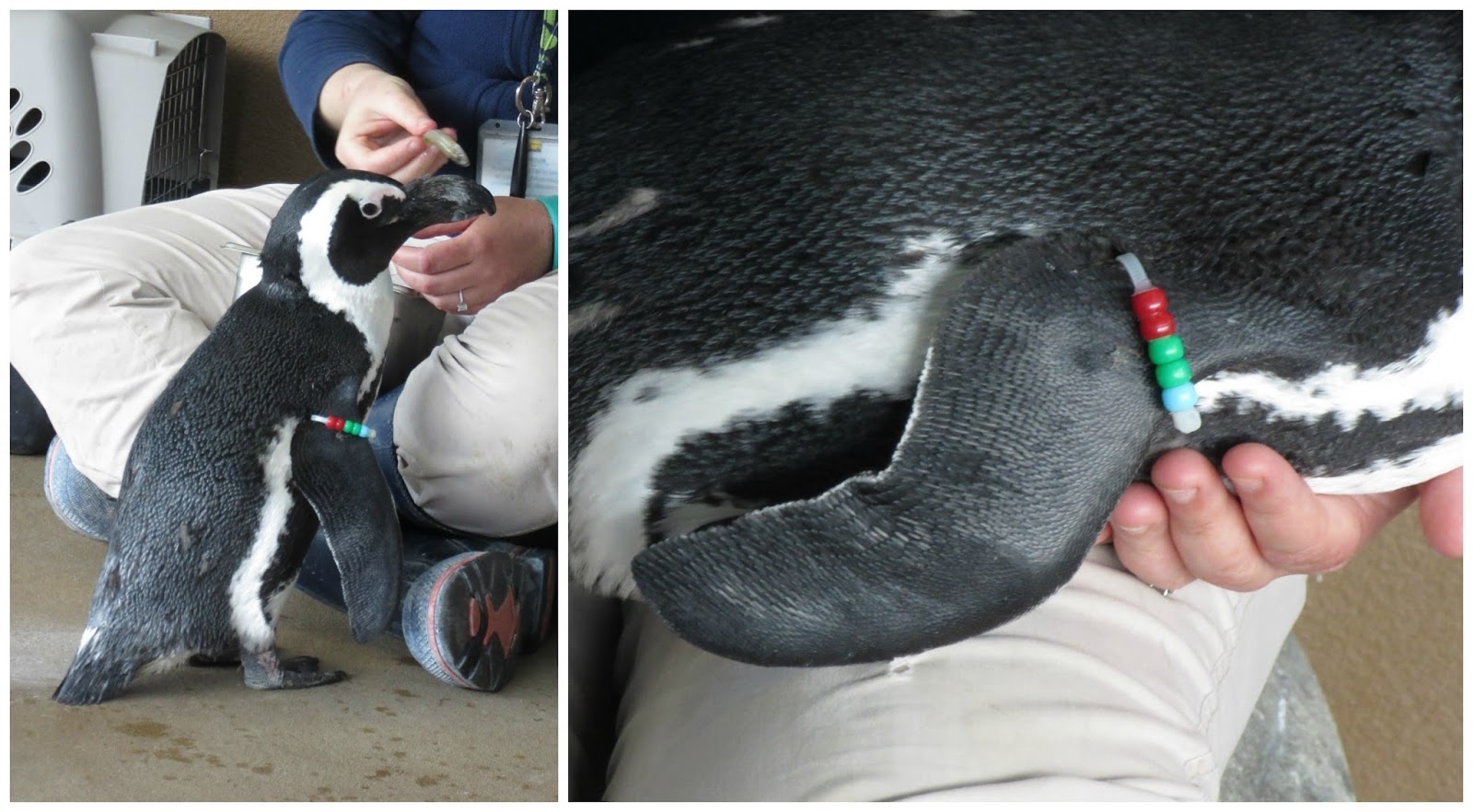 We later learned about the mating habits of the penguins.  And discovered that Green Red's mate is named Green Green.  She is the 33rd penguin at the aquarium.  They recently hatched some baby penguins that were just introduced to the exhibit this past week.  They are the proud parents of Purple Purple and Purple Silver.  We were able to catch both Green Green and Purple Purple when we visited the exhibit during the afternoon feeding session.  In the photo below, you can see that Purple Purple has yet to be identified as male or female based on the white bead proceeding the naming beads.  We also learned that it is during the first yearly molt that the baby African penguins develop the signature black stripe across their chest.  Notice that Purple Purple currently doesn't have the stripe that Green Green and Green Red possess.  I told you we learned a lot! :) 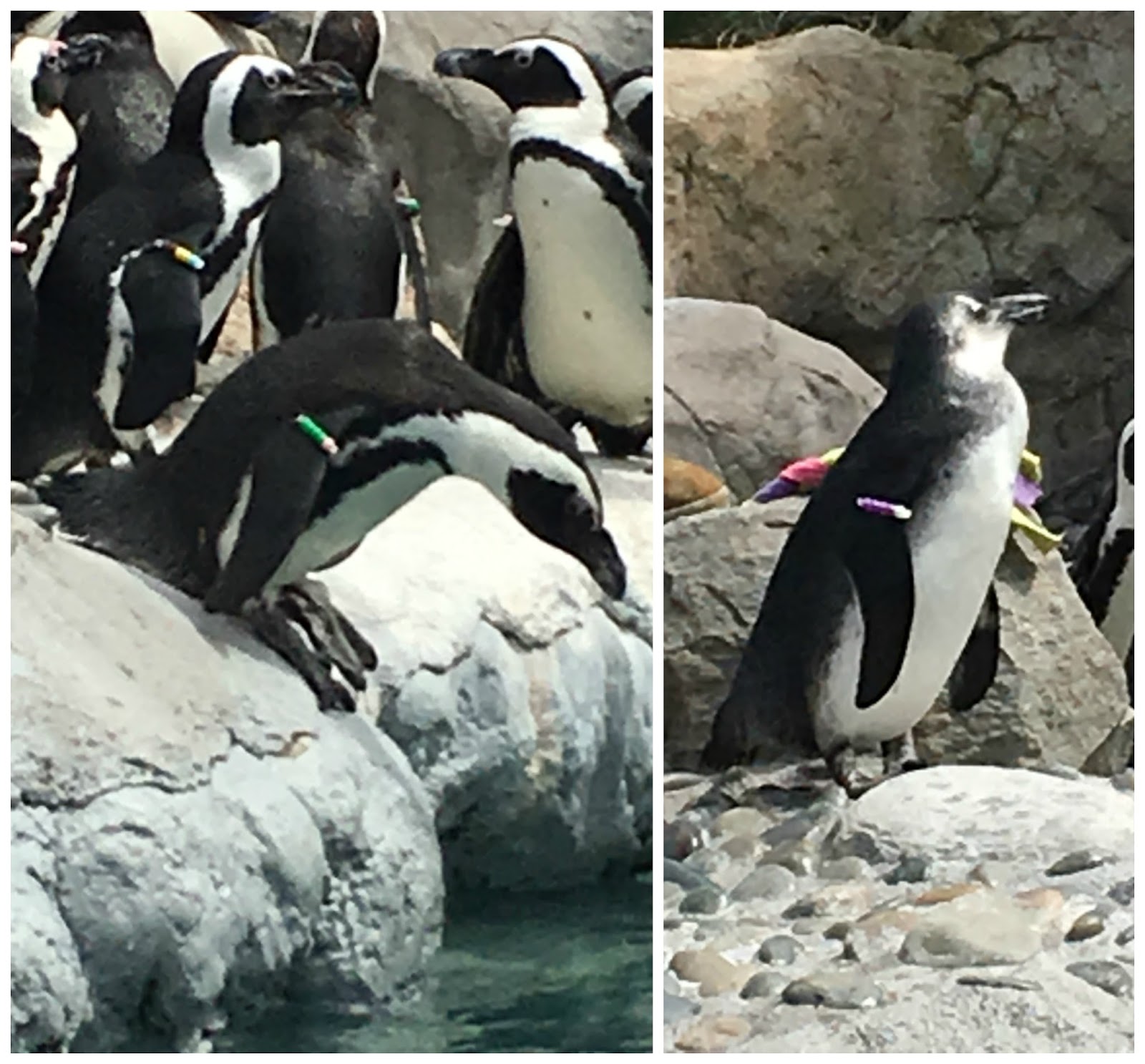 Mystic Aquarium also does a lot of work to assist in keeping the African penguin from becoming extinct.  Sadly, it is currently an endangered species in the wild.  We learned about the aquarium's various efforts on the coast of Africa.  And discovered several ways we could help locally - recycling and using reusable grocery bags!

Interacting with Green Red during our encounter was such a special experience.  I have always loved penguins (and had a similar encounter experience at Sea World with my parents when I was a teenager), but as an adult this experience was much more educational.  I will certainly be looking into ways to go above and beyond to protect these amazing and precious creatures!  I hope you'll do the same! 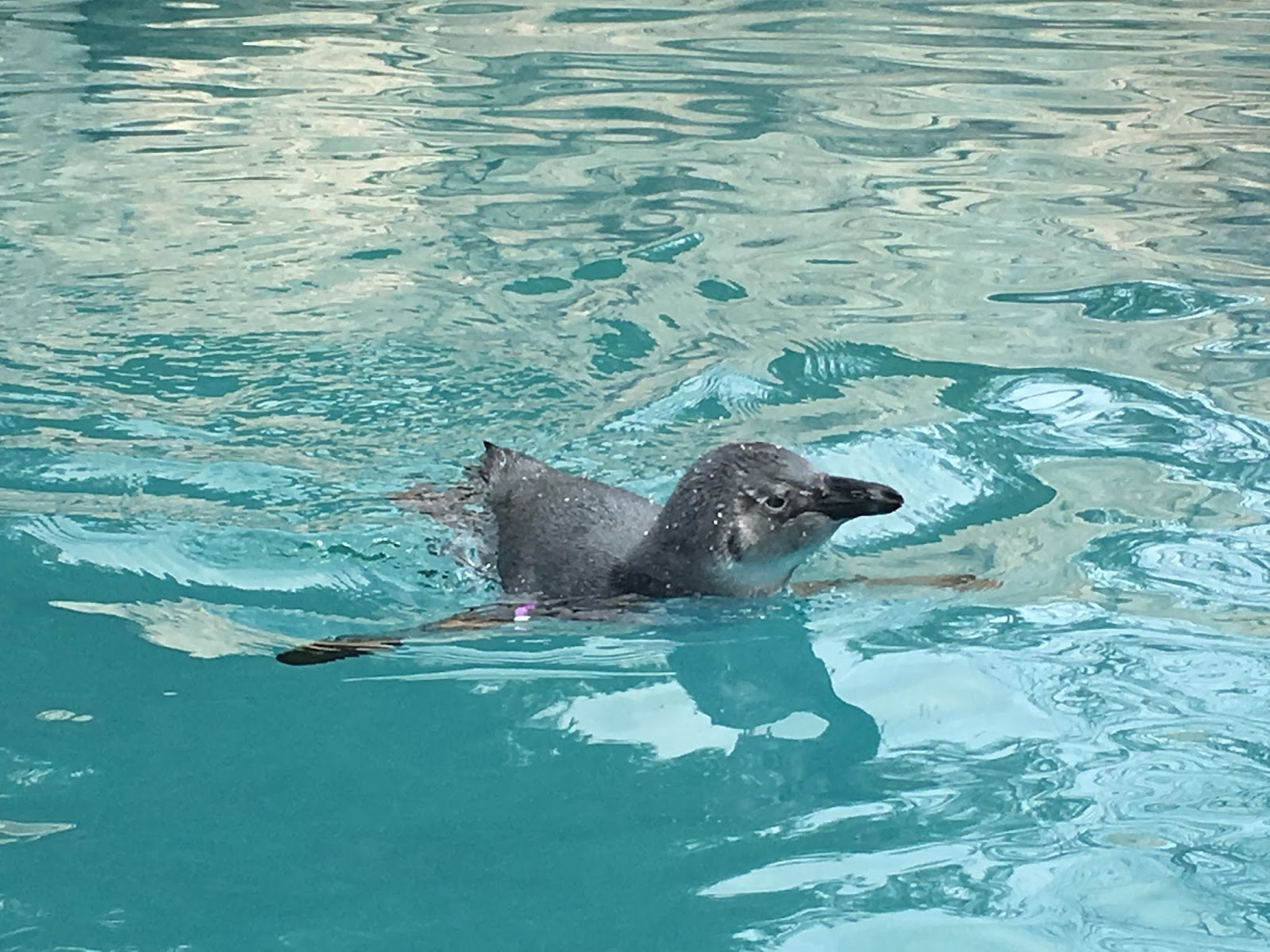 Aren't penguins just adorable?  What is your favorite animal?