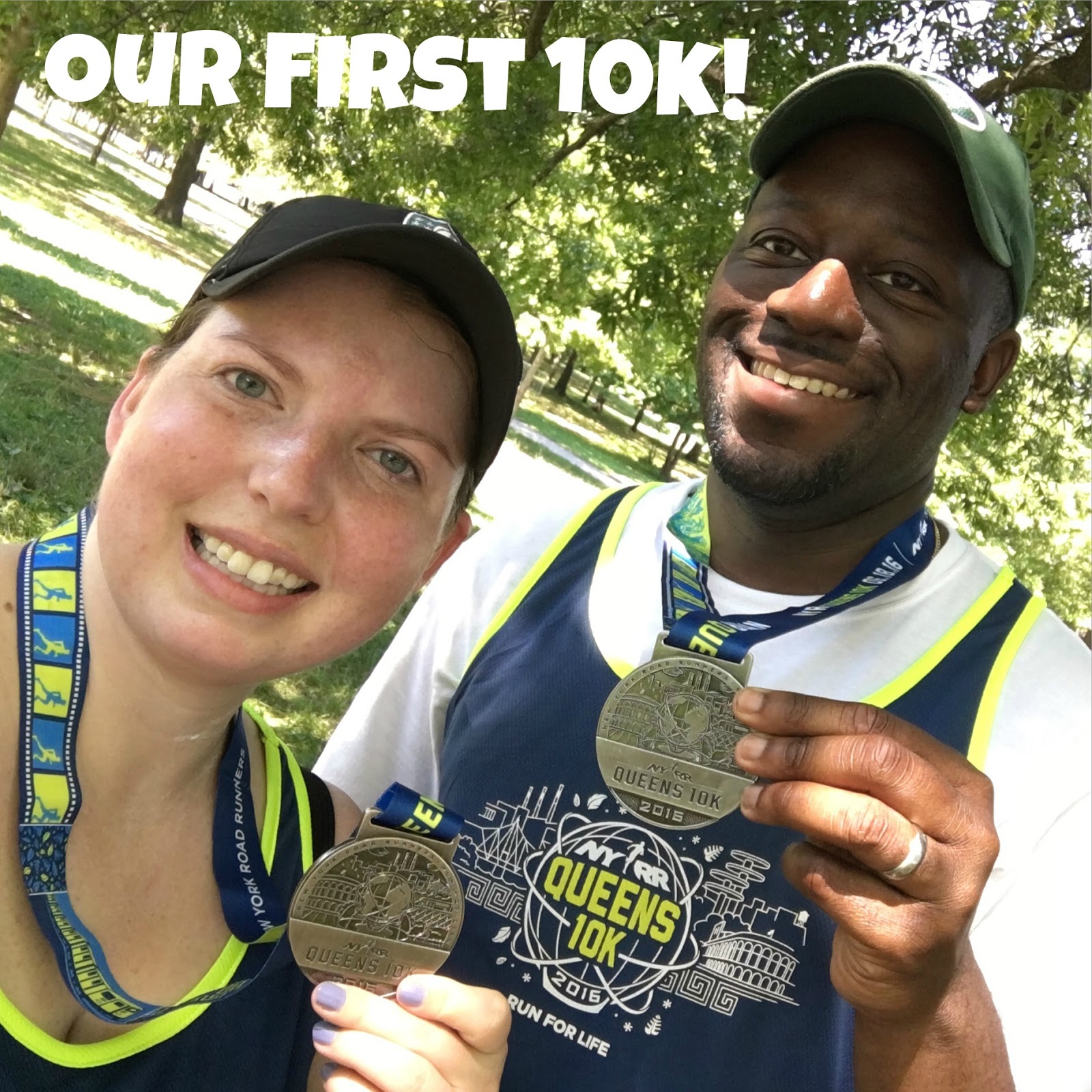 Today, I have a special guest joining me on the blog to share all about our 1st 10k experience together.  I thought it would be fun for you all to hear his point of view regarding our recent 6.2 mile run in Queens.  Without further ado... 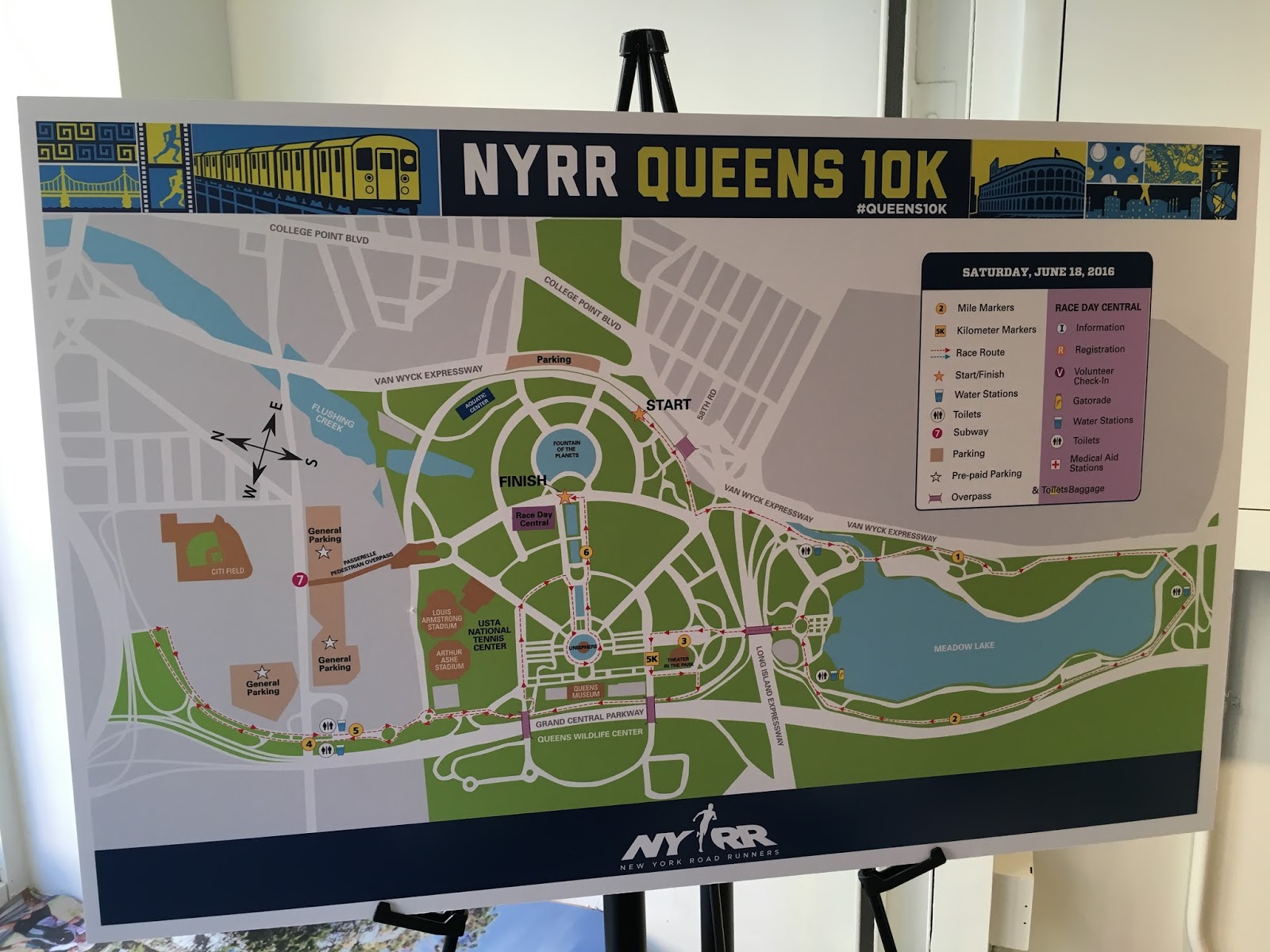 Last year, I decided I wanted to run a race where all finishers received a New York City Road Runners medal. As a Queens resident, the Queens 10k was a logical choice. To prepare, I ran three races - Run for Japan, LIC Run the Waterfront, Retro 4 Miler - and bought fancy running shoes that probably cost too much money. That is the most I ever ran in my entire life, but I wanted to be ready for this race. 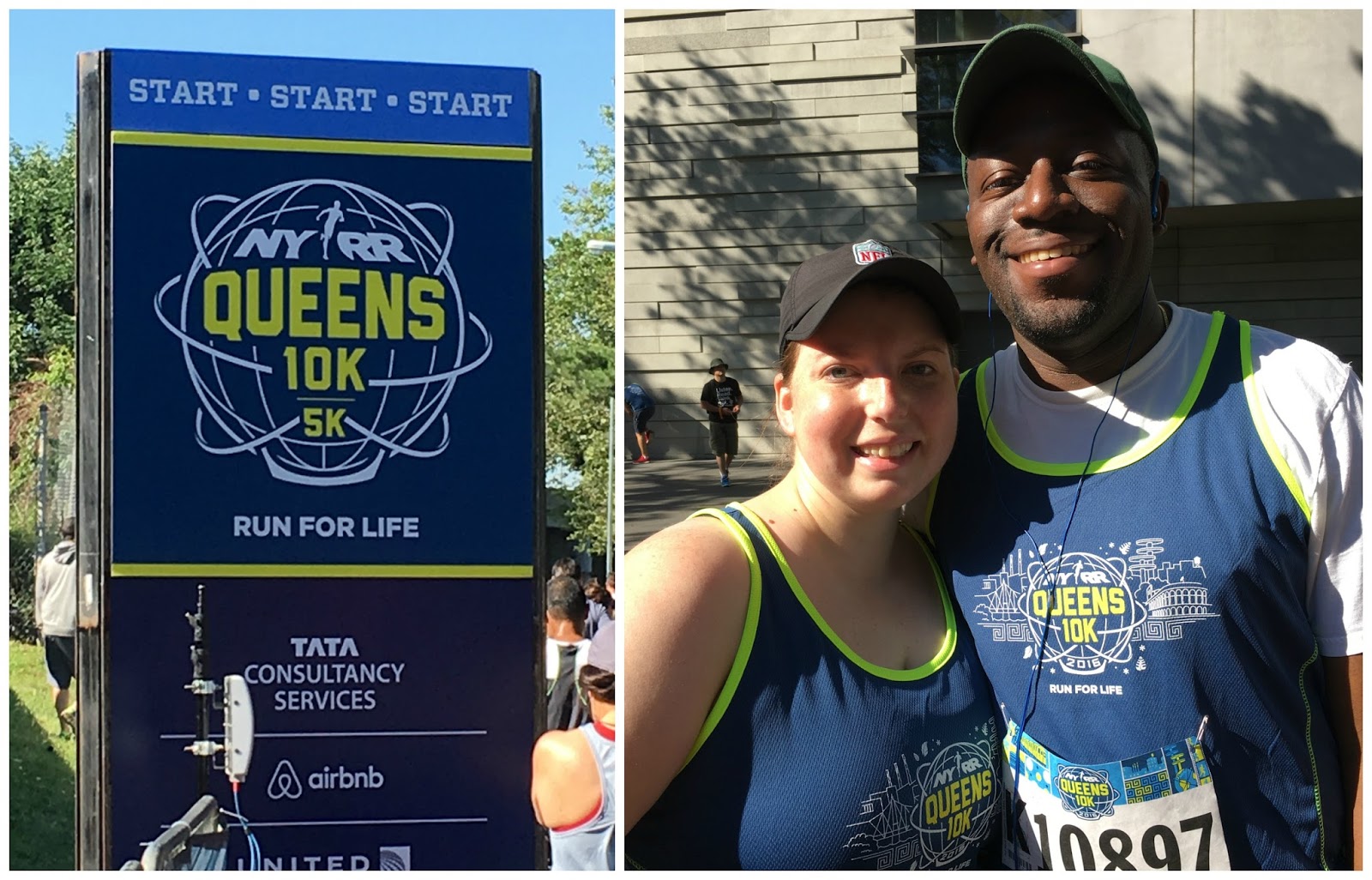 The race took place at Flushing Meadows Park which is a long ride on the 7 train especially on Saturday morning when you are half asleep. But Andrea and I got on that train early and were greeted with quite a few others heading to the same place. Due to my bad knees, I have what could be described as an elaborate stretching routine.  I need to get there 20-30 minutes early so I can get ready. There were so many people at this race that I could have shown up at the 8:30 scheduled start and still had time to stretch. We didn't start until almost 9.  At that point, it had started to get warm.

This was the only the second time I ran alongside Andrea. Before, we had a great race routine - she ran and I watched. My desire to get a medal changed that but I wanted to run with her. Most of the time I ran listening to podcasts, but recently I felt that music was more helpful. My mp3 player was loaded with music from the Roots and I was flying. Unfortunately, I started too fast. Flushing Meadows Park is not like Central Park. You are not running under trees. After the first mile, it started to get very warm and we started to slow down. The heat got to us and our pace suffered. 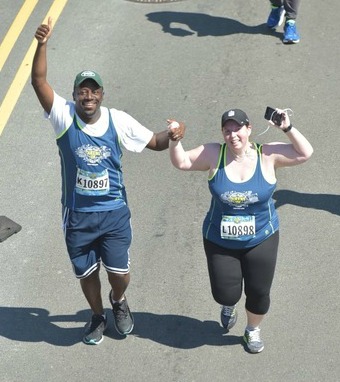 The second and third miles seemed to be entirely in the sun, wearing us down even more. This race also has narrow paths making it mentally easier to walk in small spaces. There was even a point right before you reach the 5k mark where you run over a bridge. By the 4th mile the end was in sight because there was a turnaround ahead. Plus at that point, I could see people with the medal that was awaiting me when I finished. That plus the Roots kicking in moved me on. 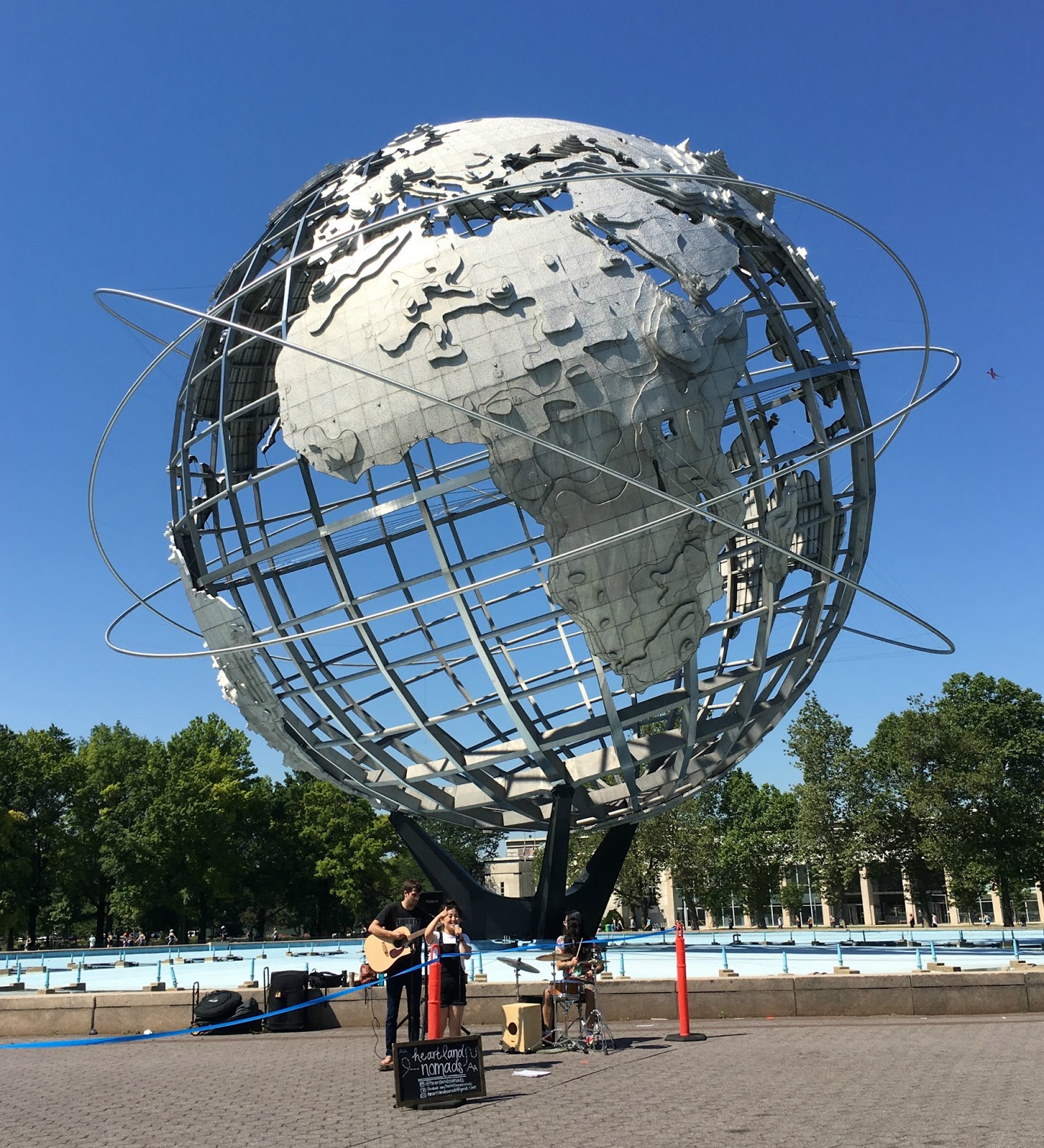 Finishing up the 5th mile, Andrea and I were settling in. We were running towards the Unisphere. I could see the finish line. Except our path to it was not straight. We had to run around the Unisphere. Andrea tells me there is a time she wants to beat and we have to finish in 5 minutes. I see this as the time to go back to how I ran that first mile. We kicked it into high gear and finished the race. We held hands as we ran across the finish line. Then we got our medals. Andrea put it around my neck. She knew how important this was to me. 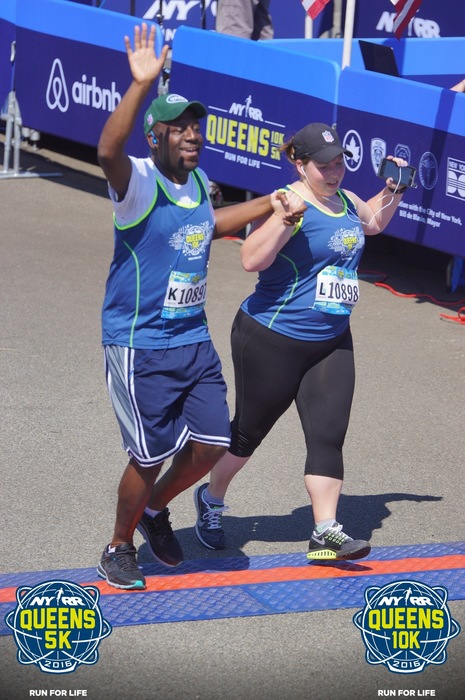 My knees were sore and I knew I would spend the rest of the day with ice but I made my goal. I was happy about that. When people run the NYC Marathon, they wear their medal to work the next day. I didn't go out in public with my medal, but I sat on the couch wearing it around my neck icing my knee and thinking I really accomplished something today. 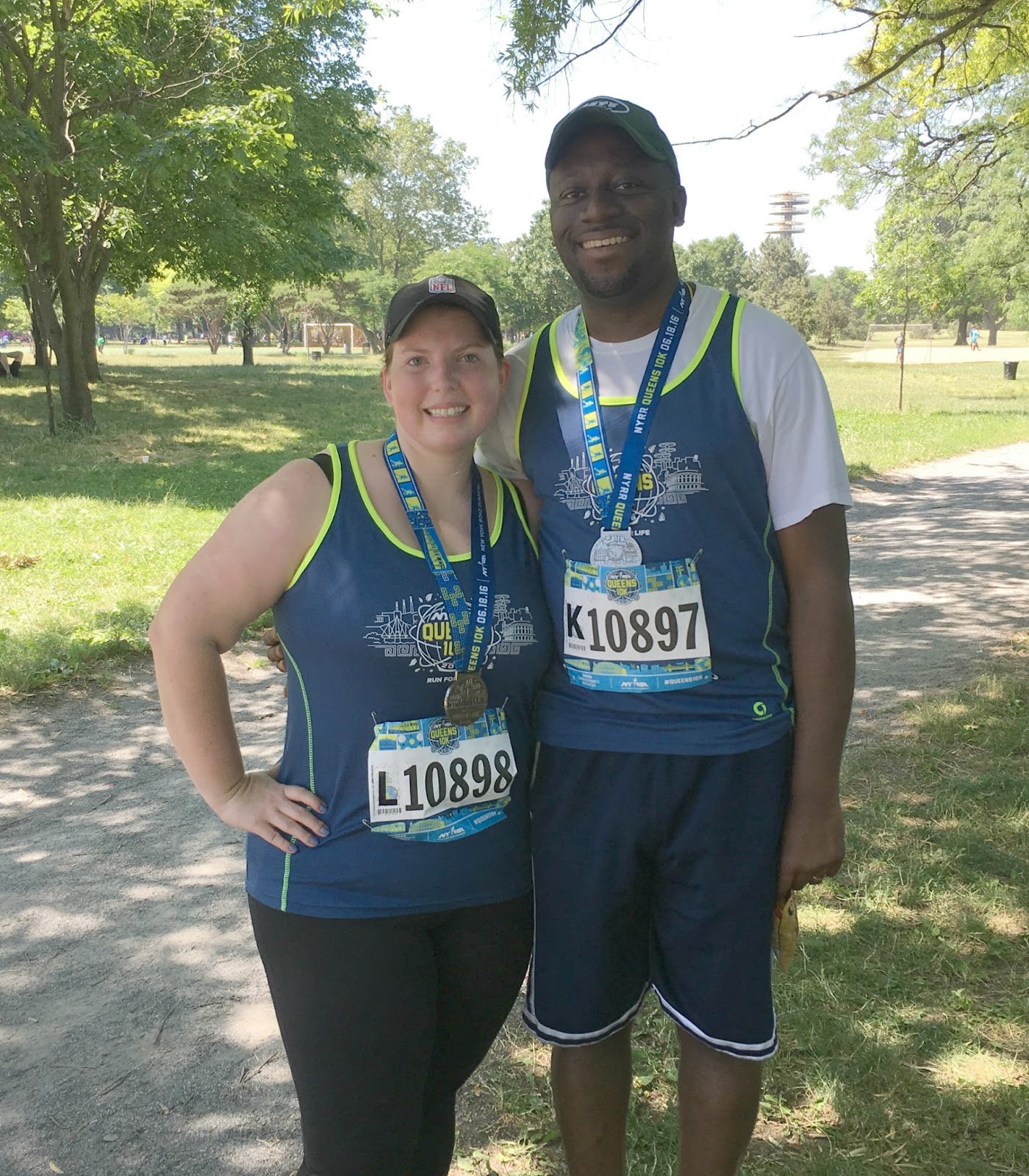 Thanks for that great recap of our experience, Christopher!  It really was a special day.  I'm so glad we were able to be there for one another throughout the training and all 6.2 miles on race day!