Name of Stadium: Georgia Dome
Capacity: 71,228
Game Attended: versus Saints in November 2012 with Jordan
Worked a game at this stadium? No.

After a week of meetings in Atlanta, my brother, Jordan, drove down to join me at the Thursday night game two weeks ago.  Our friend, Alisha, showed us around downtown Atlanta and went to dinner with us at Atlantic Station prior to the game.  This is a great little area not too far from the stadium.  It was decorated for Christmas! 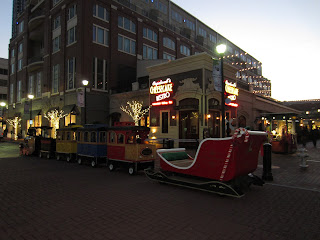 We ate at the Cheesecake Bistro just behind the sleigh.  It was very good.  I had some chicken wings and a delicious piece of cheesecake.


Then we headed into the traffic near the stadium.  What a mess!  We finally found parking and headed over to the stadium where we stood in line amusement park style prior to being security wanded and entering the stadium.  It was quite the set up.  And like nothing I had ever seen before.

We barely made it to our seats in time for kickoff!  We were sitting in the upper level, but the seats weren't bad at all.  It was pretty warm inside the dome and the fans were intense!  It was a division rivalry game with the Saints and the Falcons have only lost one game at this point in the year so I'm not sure if that was what had them so riled up or not, but they were loud and proud! 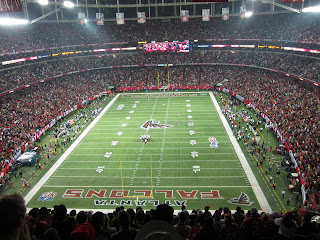 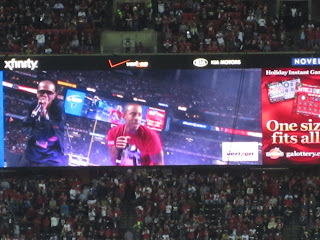 After the mini-concert, Jordan and I headed out to the concourse in search of our game souvenirs.  He always gets a shot glass and I get a pin.  Luckily, they had both in stock!  However, we circled nearly the entire concourse before we found a little shop.  One thing I disliked about the stadium was that it was not a team owned facility.  This results in a lack of branding and control over the concourse.  I definitely prefer team-owned stadiums.  The concourse also had the feel of a county fair.  They were selling cotton candy and funnel cakes and people were hanging out.  It was interesting.  Wish I had taken some pictures of that area, but I didn't. 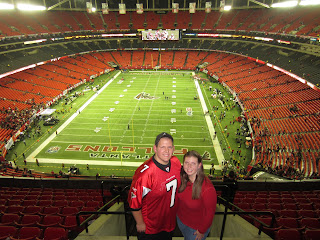 Overall, the game and crowd were quite exciting, but the venue was lacking in a lot of ways. We had a great time!  Always fun to spend some quality time with my little brother!!