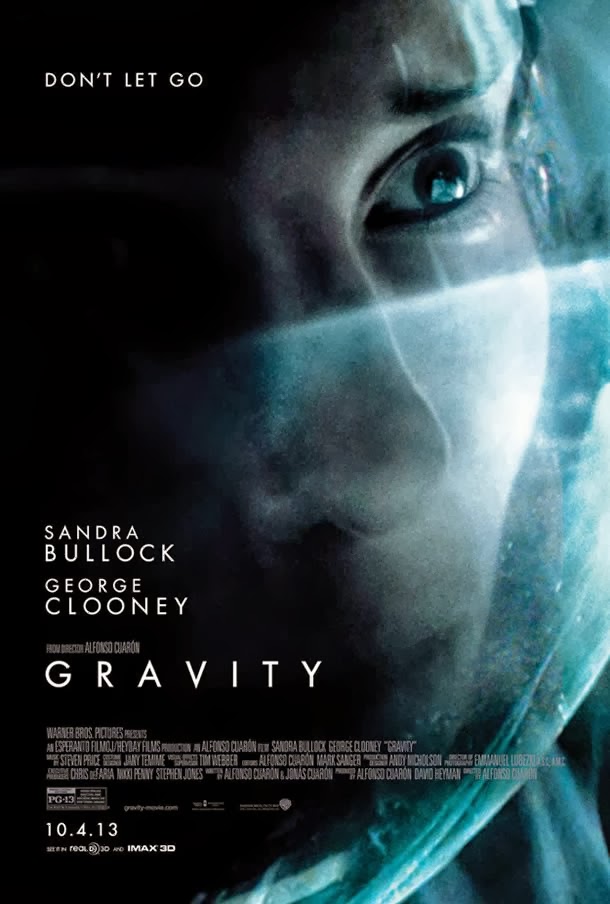 Oscar Nominations:
Best Picture
Actress (Sandra Bullock)
Directing (Alfonso Cuaron)
My Review:
1  2  3  4  5  6  7  8  9  10
Gravity recieved a LOT of hype when it came out in theaters.  The previews didn't particularly grab my interest.  And I am not a fan at all of 3D movies.  So...I wasn't planning to see this movie.  Until, of course, the Oscar buzz started.  Then, I became a little more intrigued.  Chris wasn't interested in it so I saw this one by myself one day after work.  I was quite surprised by how much I enjoyed it.  I thought it was very unique that the entire film was shot in space.  It must have been extremely difficult to coordinate the movements in these scenes.  I actually just saw a clip regarding the mechanics involved in the filiming of the movie when Sandra Bullock was on Jay Leno last night.  Wow!  I can't imagine having to practice movements with machinery to make them look fluid AND act at the same time.  Quite impressive!  I don't know how many theaters are still playing this movie, but I would highly recommend seeing it in 3D if you intend to watch it.  Even though I'm not a big 3D fan, I believe the movie would definitely lose something without that third dimension.
Have you seen Gravity?  What did you think?
Andrea :)
Posted by Andrea H. at 11:54 AM