My Second NYC Marathon: A Recap 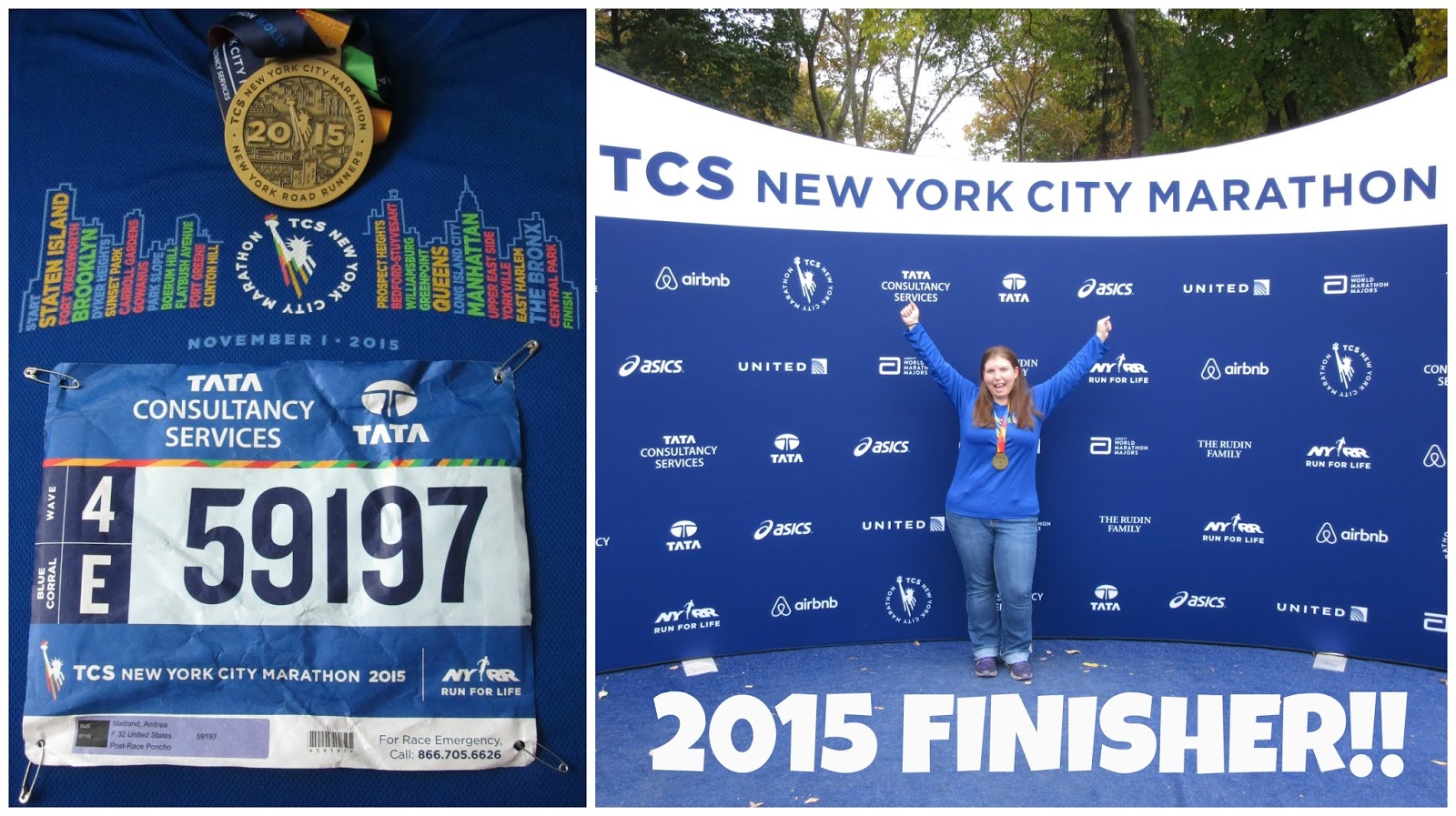 It is difficult to recall now what exactly possessed me to run a second marathon let alone a second marathon in the same city, but now that I'm a couple weeks removed from crossing the finish line I suppose it doesn't matter too much.  It was a tough race for me, but I had some really great moments along the way. If you ever wanted to be inside the mind of a minimally trained marathon runner, you've come to the right place.  It is a long one, but hopefully the photos make it worthwhile for you :) 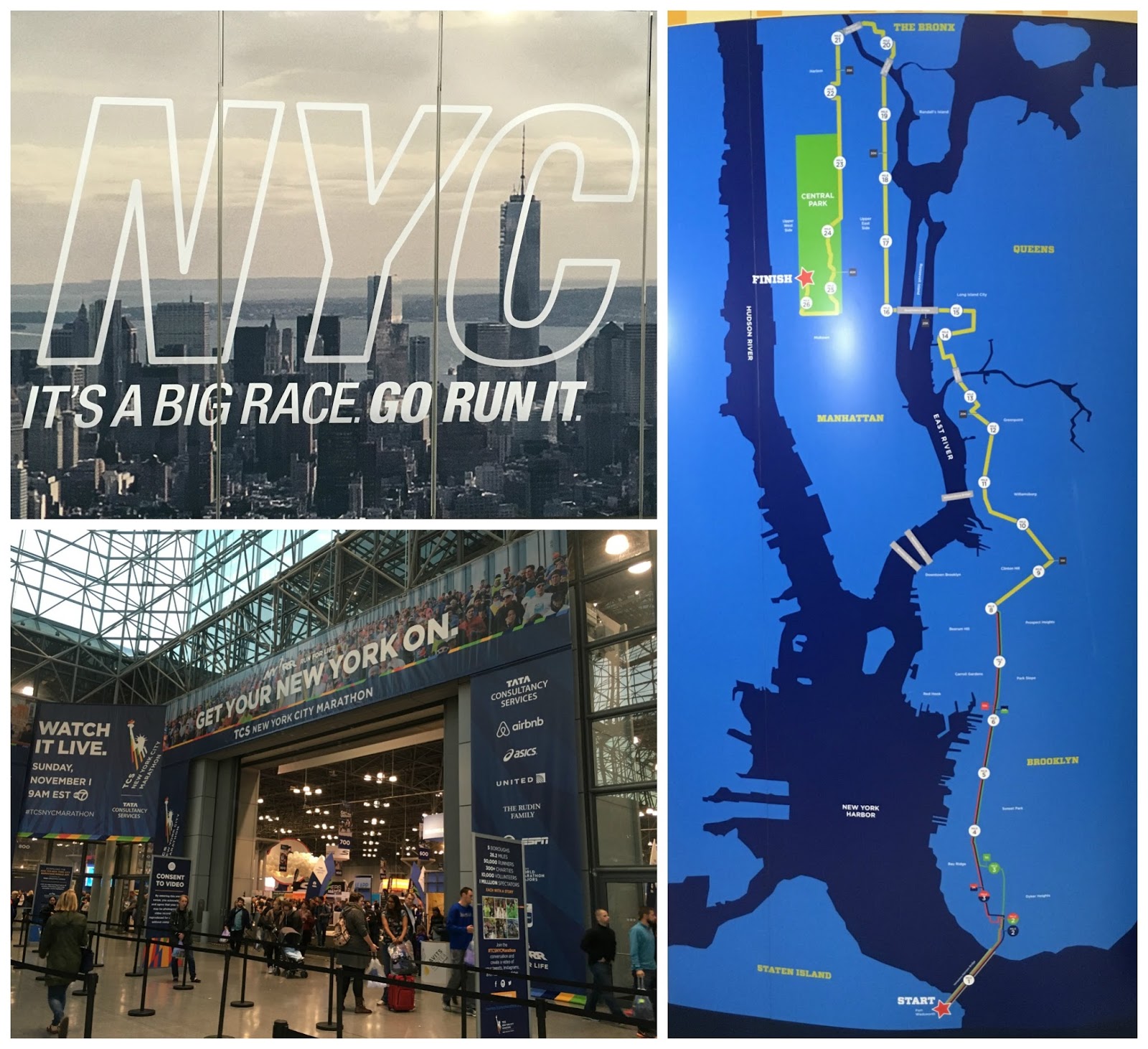 It's 5:30am...and the alarm tells me it is time to rise and shine.  It's marathon day!  I'm groggy, but I get up.  It takes a bit of time for me to wake up though.  Thankfully, I laid everything out before I went to bed.  My breakfast is tucked into my bag along with several items to keep me warm as I wait for my group to start on Staten Island.  My supportive husband volunteers to walk with me to the subway station so I don't have to worry about keeping track of my metro card all day.  He's the best!  We head over to catch the 7 train. 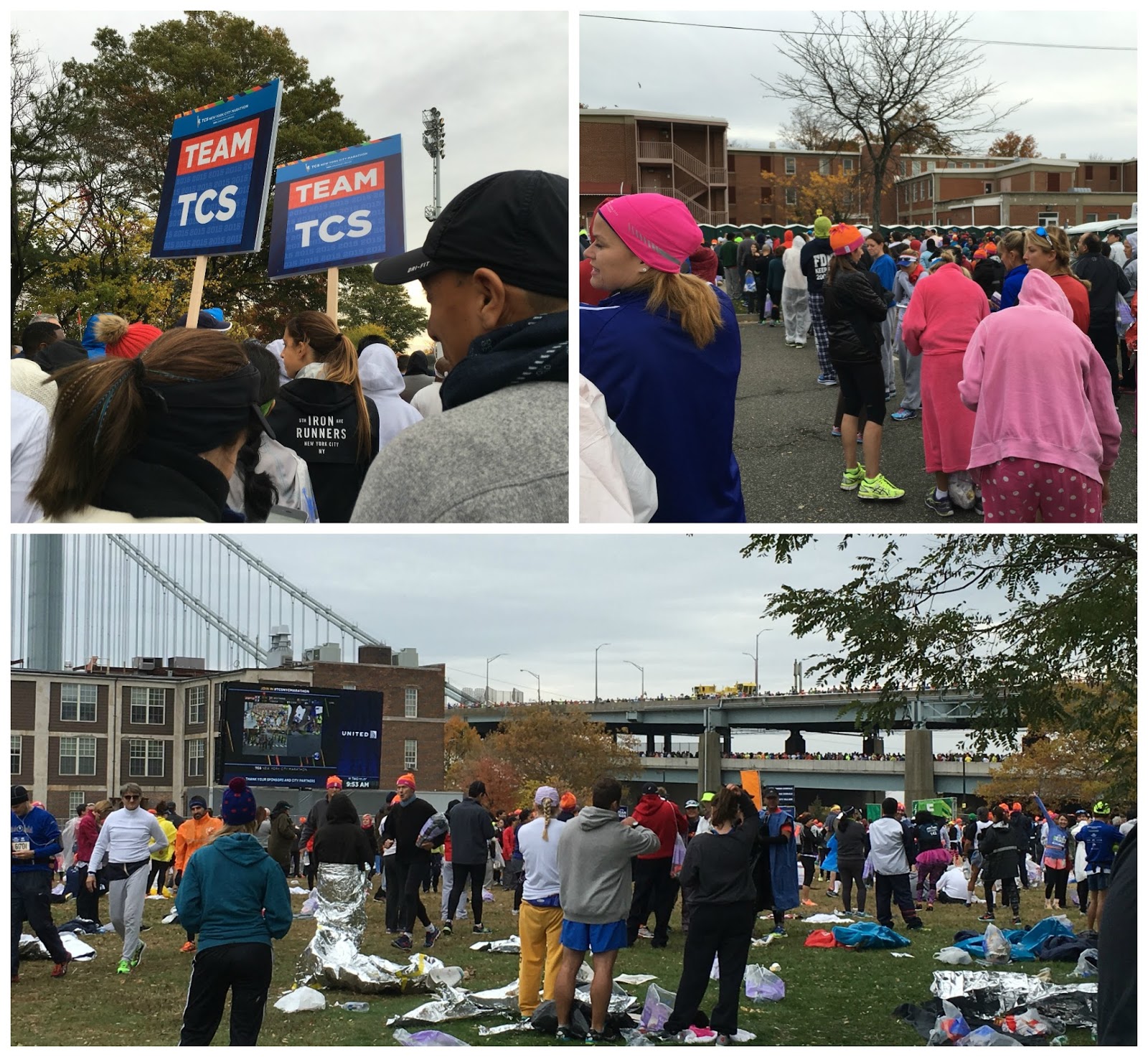 At 6:15am, my train arrives.  There are a couple other marathoners that hop on board with me.  And just like that I'm on my way.  By 6:45am, we are shuffling through the barricades toward the charter buses lined up at the Public Library in midtown.  I managed to snag a row to myself so I grabbed a few much-needed winks on the ride out to Staten Island. After arriving, runners are herded like cattle through the security area.  And then the waiting begins!  I drank SO much water at home that I headed straight to the never ending port-o-potty line.  It took ages to get to the front of that line, but there were lots of conversations going on that made time move just a tad faster. 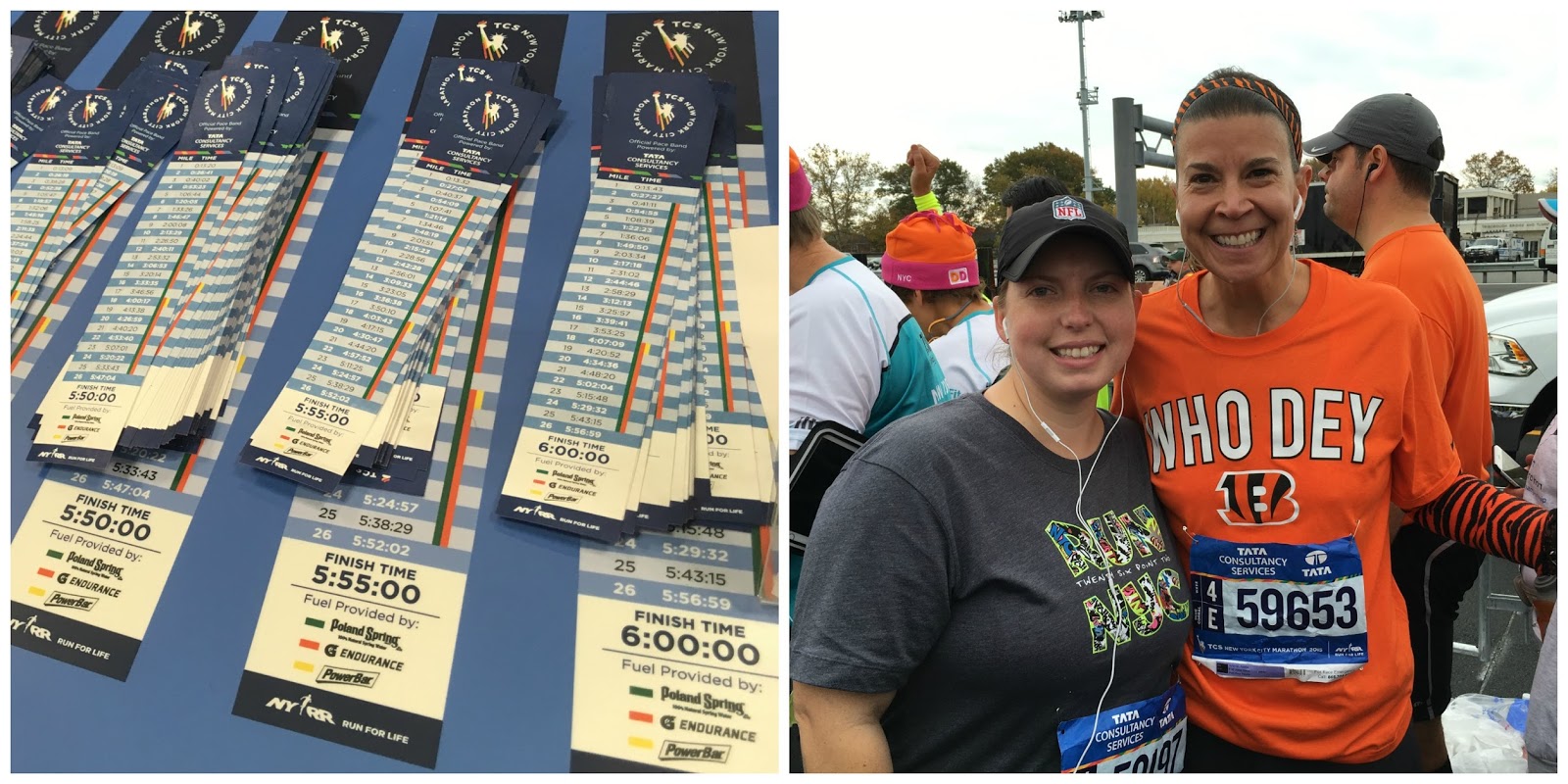 Finally, I found a spot to call home for a couple hours.  I ate my banana and peanut butter breakfast and downed some more water.  I made a friend, too.  She had on Bengals earrings so I struck up a conversation.  As it turned out she was fully decked in Who Dey gear and we spent the next hour or so chatting and flipping through magazines together. 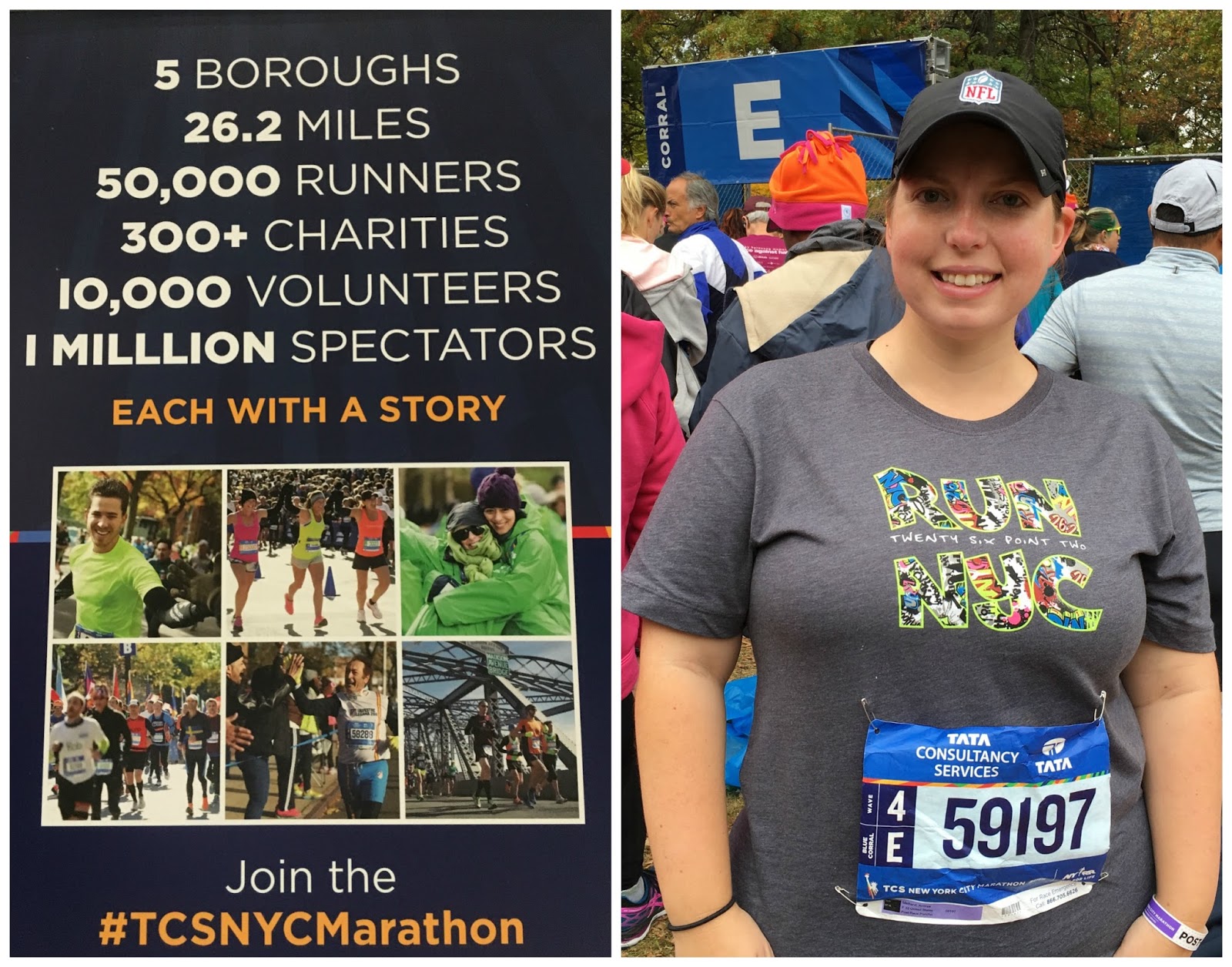 We meandered over to the blue corral and found section E between port-o-potty stops and the removal of our layers. By 11:00am our group was ready to roll!  The atmosphere was electric.  And then we waited some more.  An announcement regarding our brief delay was made.  Shortly following, the anthem was sung and a solitary shot was fired.  We were off! 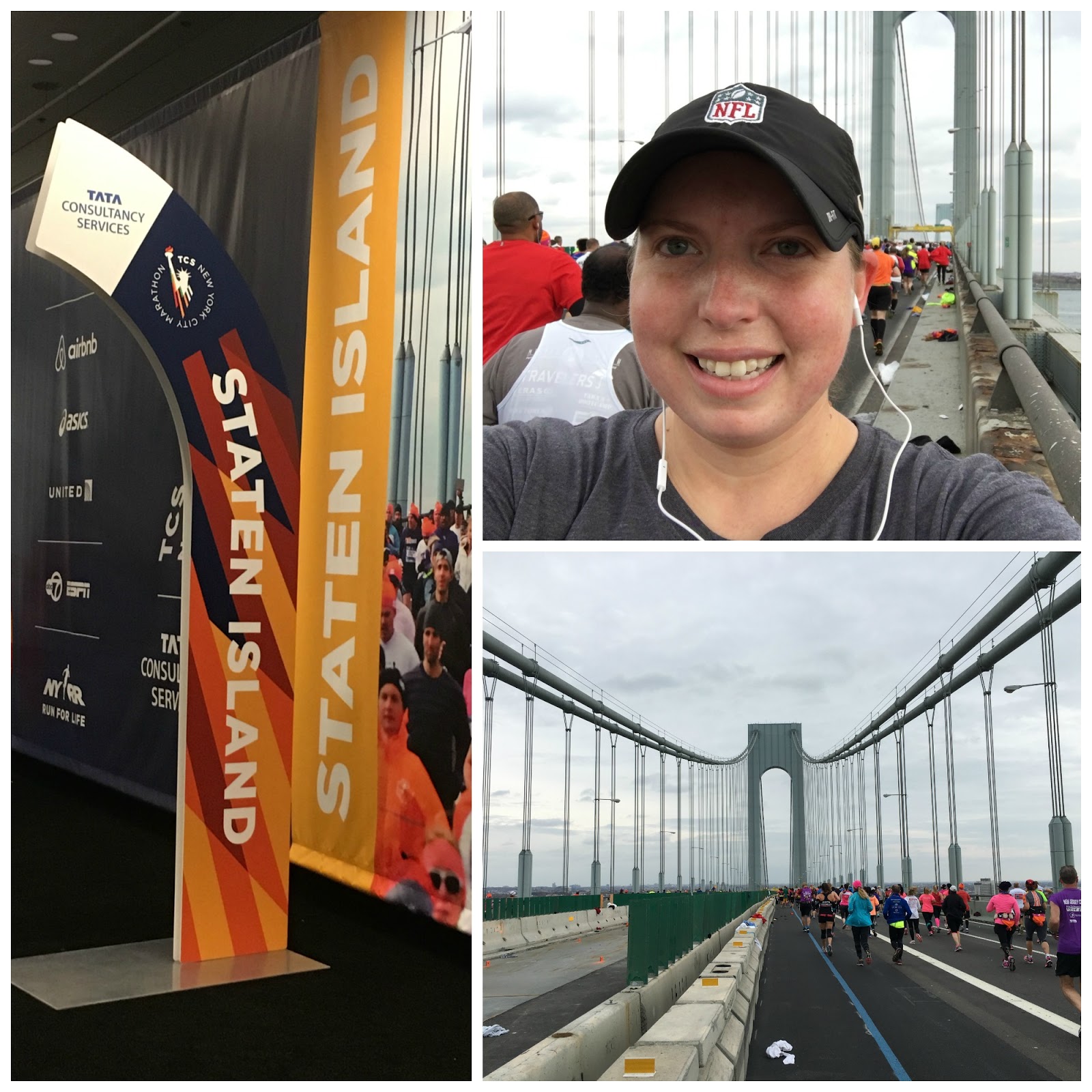 Mile 1 involved an exciting, yet grueling jaunt over the Verrazano Bridge.  There were selfies and fabulous views galore.  I cheered internally when I made it to the Mile 1 marker.  And then, out of nowhere it hit.  A side stitch.  Are you kidding me?!?!?  How can this be happening at Mile 2?  I'm never going to make it to the end at this rate.

It was painful.  SO painful.  I did everything in my power to make it go away.  I applied pressure to my side.  I walked with my hands over my head.  I eventually drank some water - thank you Mile 3 water station.  That seemed to do the trick.  My new focus became determining my pace and attempting to figure out how close I was to still being able to hit my goal time given this unexpected twist so early in the race! Mile 4 and 5 and 6 were flat and full of excited Brooklynites.  I stayed focused on putting one foot in front of the other.  And I started to listen to a little bit of my audiobook.  Somehow, I was marking off the miles a tad ahead of my 6:00 hour pace bracelet.  Shocking, but great news...especially since I was talking a short walk break at each mile's water station. 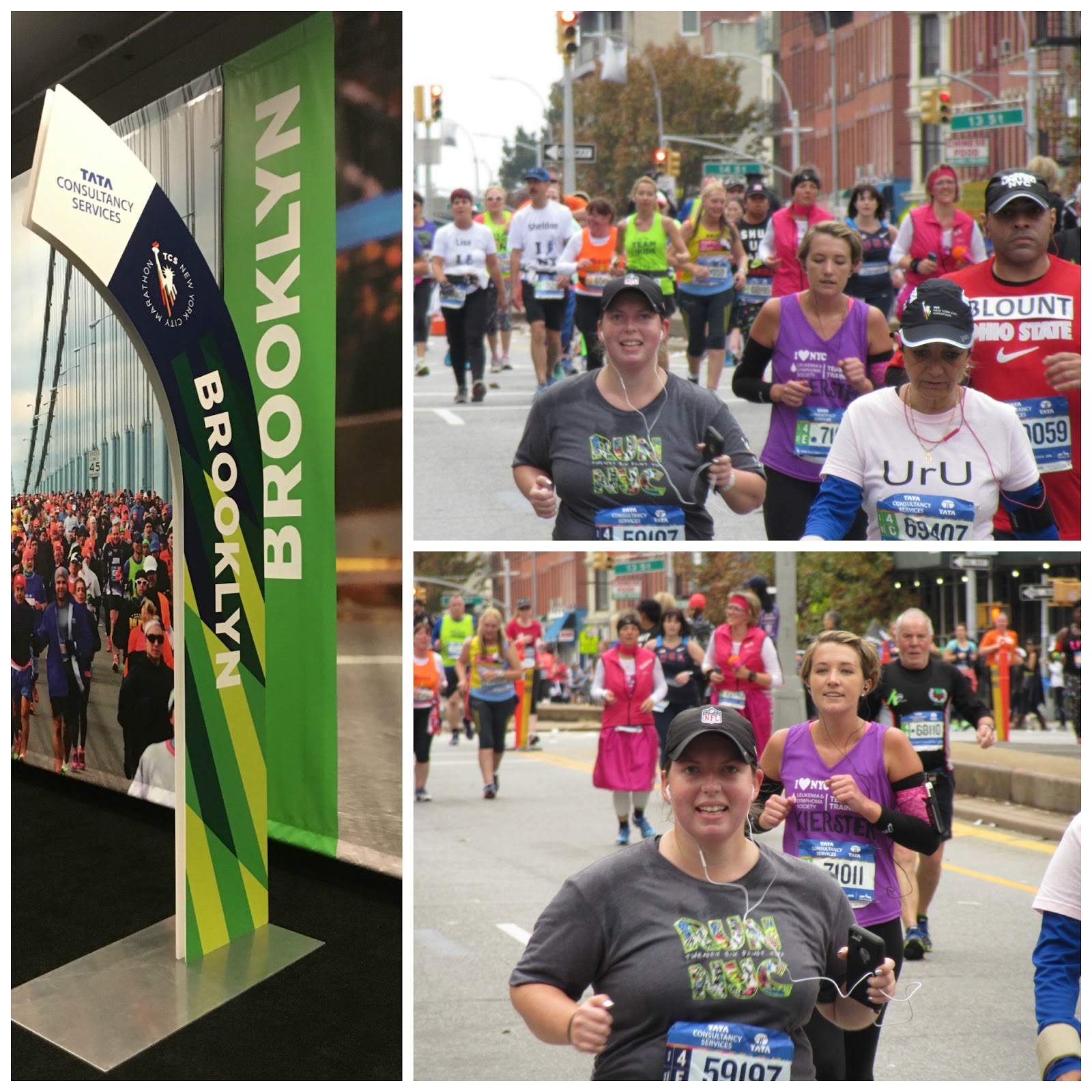 Just before Mile 7 my awesome husband was cheering me on with a sign and a smile.  I was SO happy to see his face!  And he brought me some orange bloks. I needed those in the worst way!  I could feel my energy level rise as I worked my way through them over the course of Mile 8 and 9.  By Mile 10, I just wanted to be done with Brooklyn already.  Don't get me wrong, the supporters there are SPECTACULAR, but I was just ready for Queens and the familiarity it would bring.  And, of course, the halfway mark. 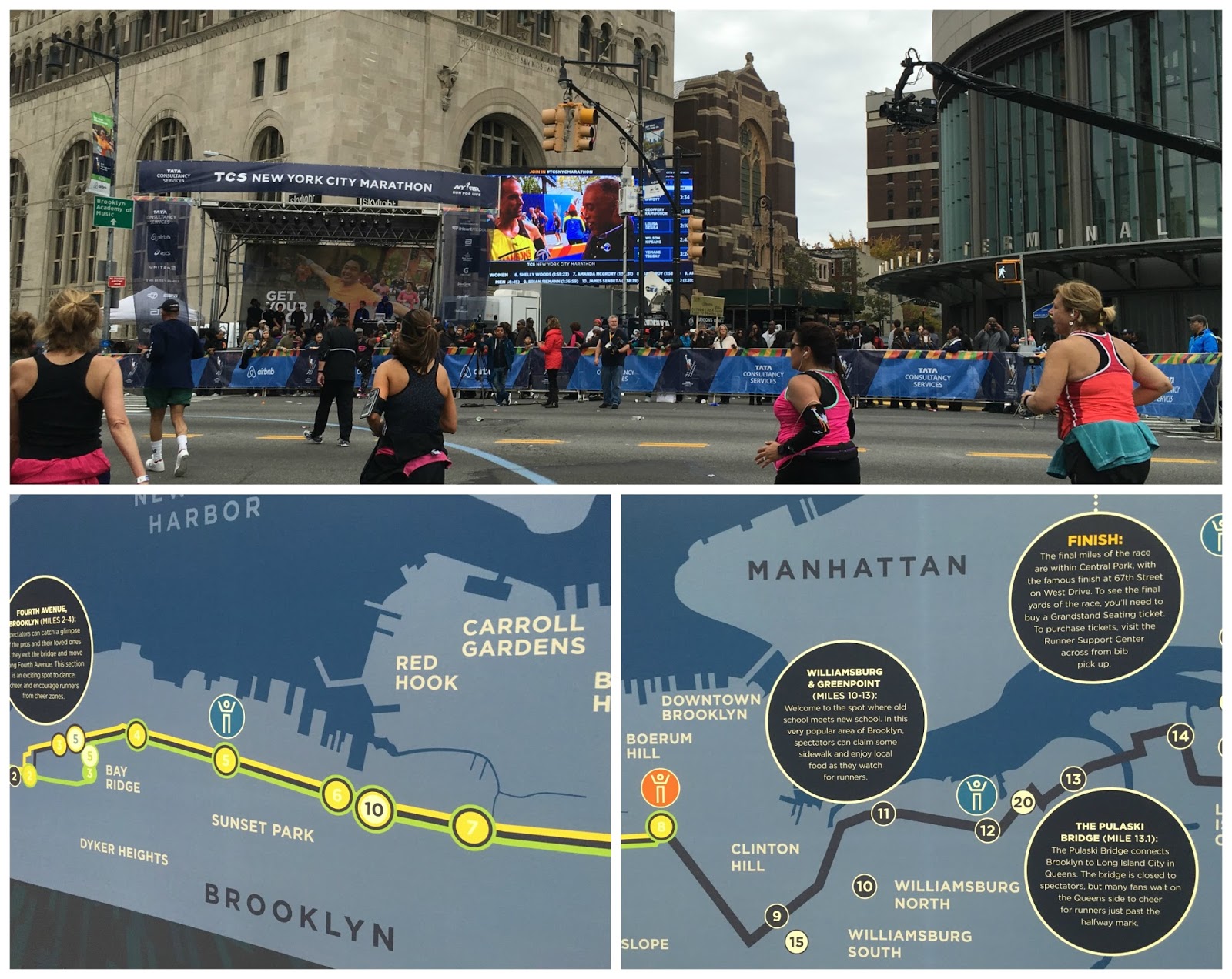 Mile 11 and 12 found me starting to really get hungry.  It was nearly 2pm.  I had been up since before the sun.  And I made the mistake of eating only once.  Mental note for next time.  Scratch that.  There won't be a next time.  I'm starving.  Back to the audiobook.  Marie-Laure is starving, too.  Can I survive to the halfway point?  This is the question I continually ask myself.  I'm right on pace at the Mile 13 marker.  I cross the half marathon timing pad at 3:00:04.  Doesn't get much more exact than that - I'm pumped!!  I see my friend from the port-o-potty line as we take a brief walking break up the hilly part of the Pulaski Bridge.  I tell her my great news and bid her adieu as I pick up the pace to maintain my timing feat.  I gain ground on Mile 14 and 15 throughout the familiar streets of Queens. 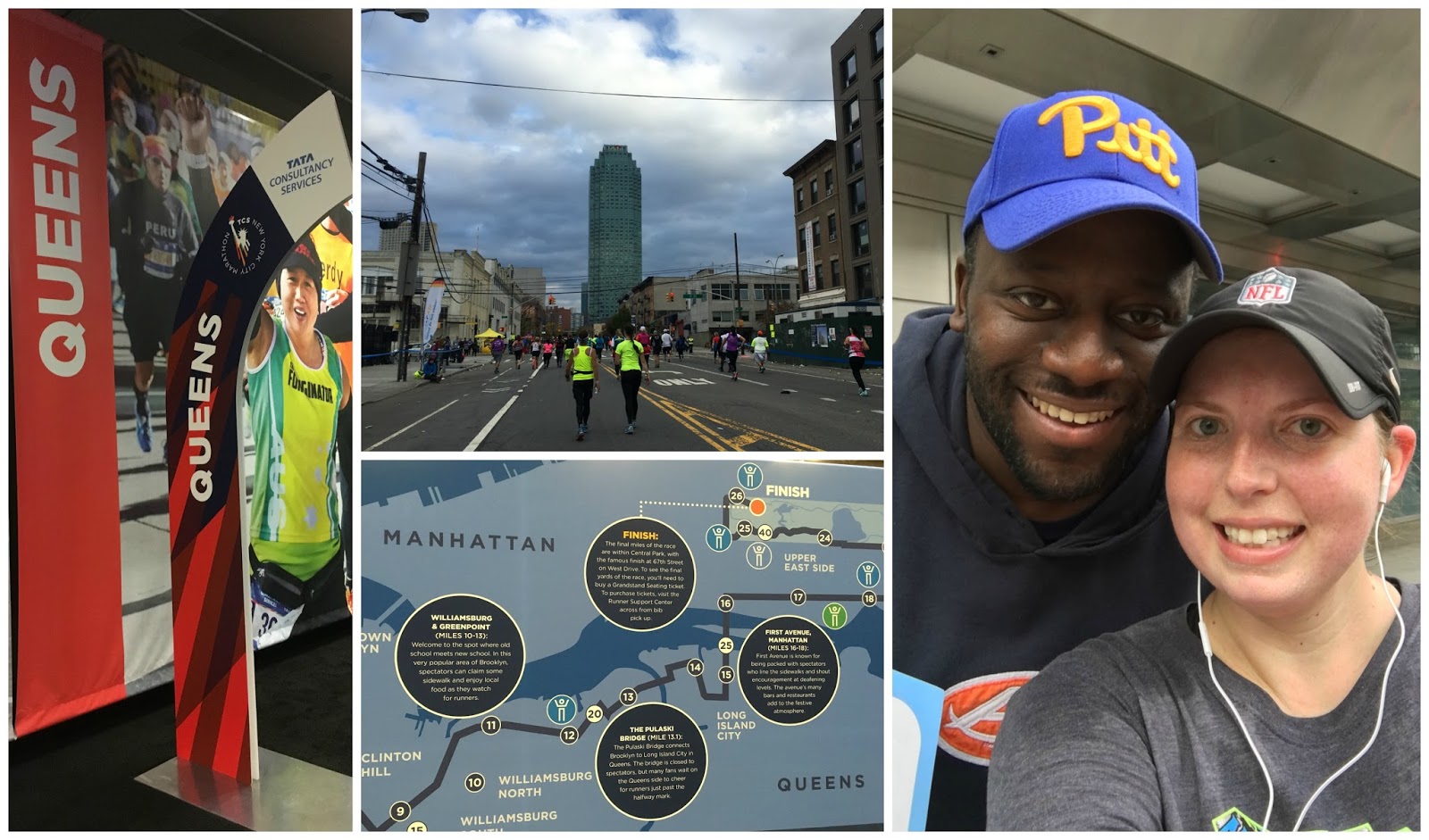 When I round the corner that will take us onto the Queensboro Bridge, I'm home.  Literally!  Chris is waiting to see me again just outside the door of our apartment building.  I decide there is time for a selfie before I grab my second stick of bloks (strawberry this time!) and exclaim that I am remarkably still on pace.  The bridge, however, is a killer.  I trained on it.  I felt so confident heading up its steep climb.  I even passed on the photo ops that so many others took because I have those pics already.  When I hit the Mile 16 marker and saw that I was two minutes off my pace, I must admit I was crushed.  Not destroyed, but crushed.  I'd done SO well for SO long.  It was a major bummer, but I remained mentally strong telling myself that two minutes was fine.  I could still finish faster than last time.  Much faster. 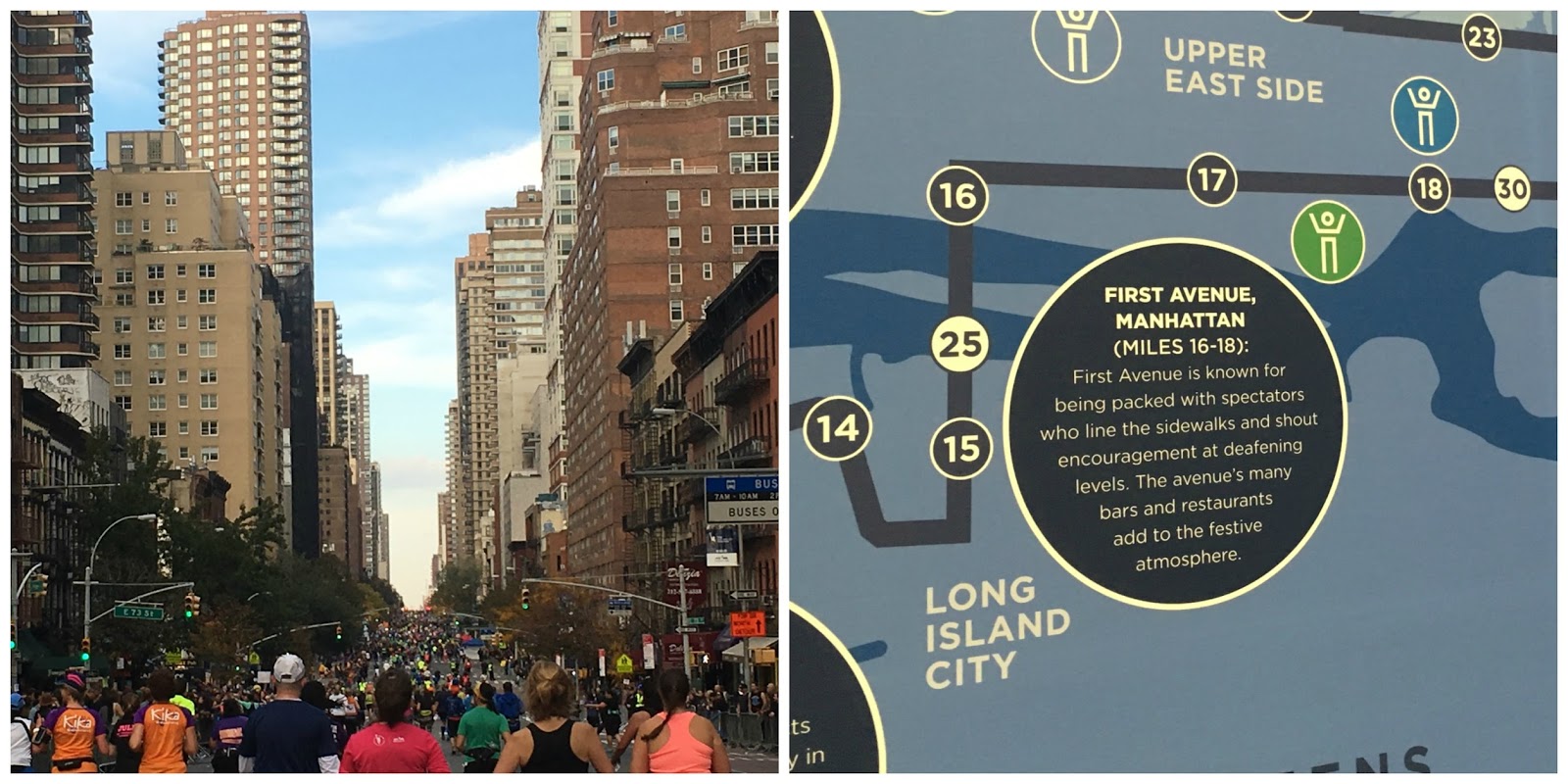 And then the steady climb up 1st Avenue began.  I held my ground through Mile 17, but it wasn't long before I completely fell apart.  I kept falling farther and farther off my pace as I moved through Mile 18 and 19.  Chris and my friend Reba were set to be around 125th street just before I entered the Bronx.  Honestly, it was the biggest boost of the day to see them there.  I was physically done.  I relayed that fact to them but they continued to encourage me.  They said I looked strong and reminded me that I just had another 10k to go.  They transferred me that last bit of energy I needed to push myself to run up and over the bridge leading to Mile 20 and the Bronx.  I cranked up the audiobook through the quiet streets there....and the next thing I knew we were back in Manhattan. 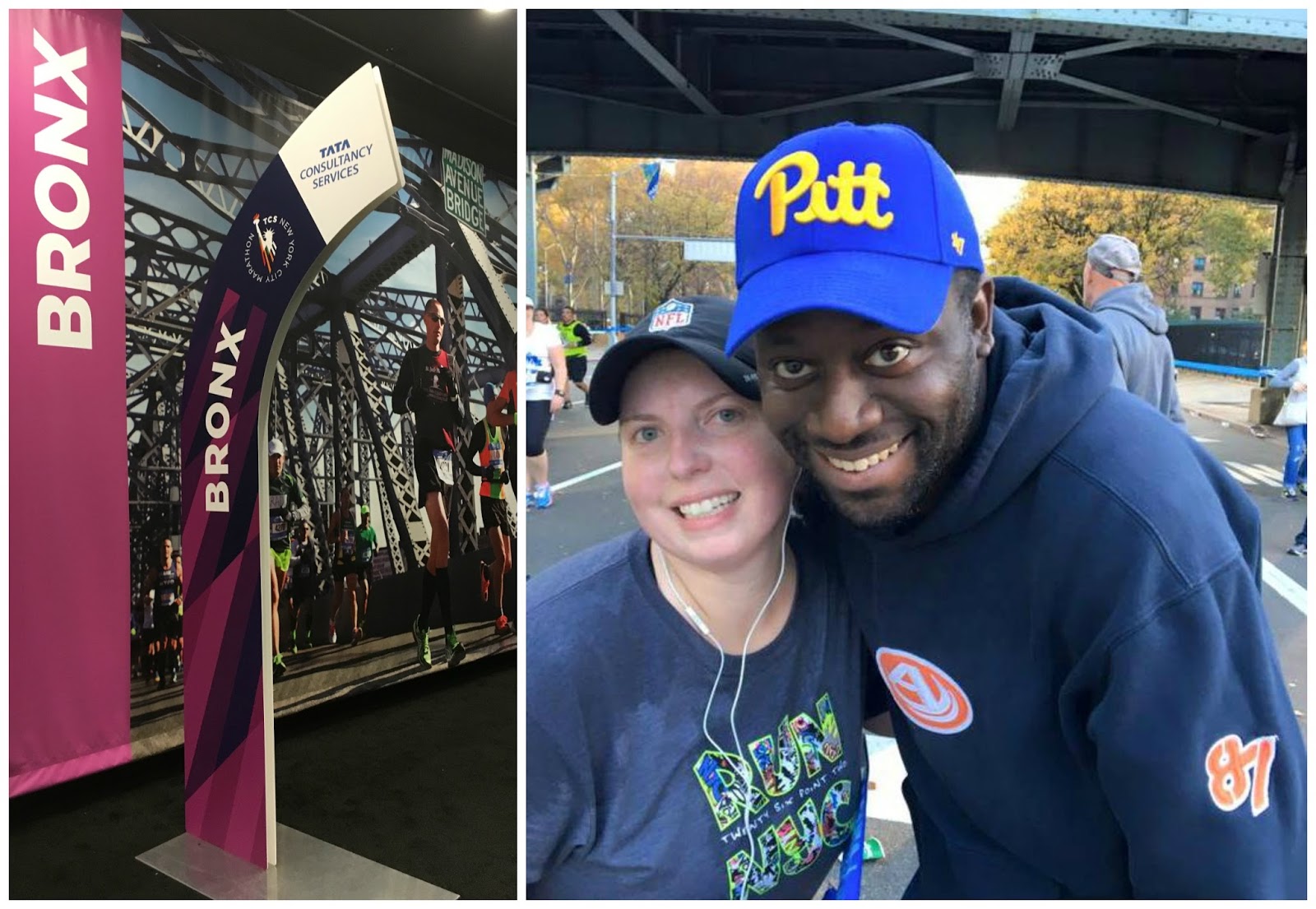 At Mile 21, I texted Chris to let him know that I was too far off my pace time to finish faster than my first marathon, but I did think I would finish.  I hadn't been too sure when I saw him earlier.  I was beyond ready to be done...and I knew at the rate I was going it would be about an hour more.  I was exhausted in every way imaginable.  Just before reaching Mile 22, I discovered that a light jog actually felt better on my blistered heels than walking so I resolved to walk only as a last resort.  Chris alerted me that the Bengals just beat the ever elusive Steelers around the Mile 23 marker.  I was SO pumped to hear that exciting news!

I'm not entirely sure how I survived Mile 24, but I couldn't have been happier to be in Central Park and rounding the home stretch. Chris was waiting for me one last time just after the Mile 25 marker.  He was on the far side of the route and those extra 10 steps to get to him were well worth it.  I knew it was almost over.  I made him pose with his poster even though it was practically pitch black dark at this point.  I didn't stay long, but it was the break I needed to push through that final mile. 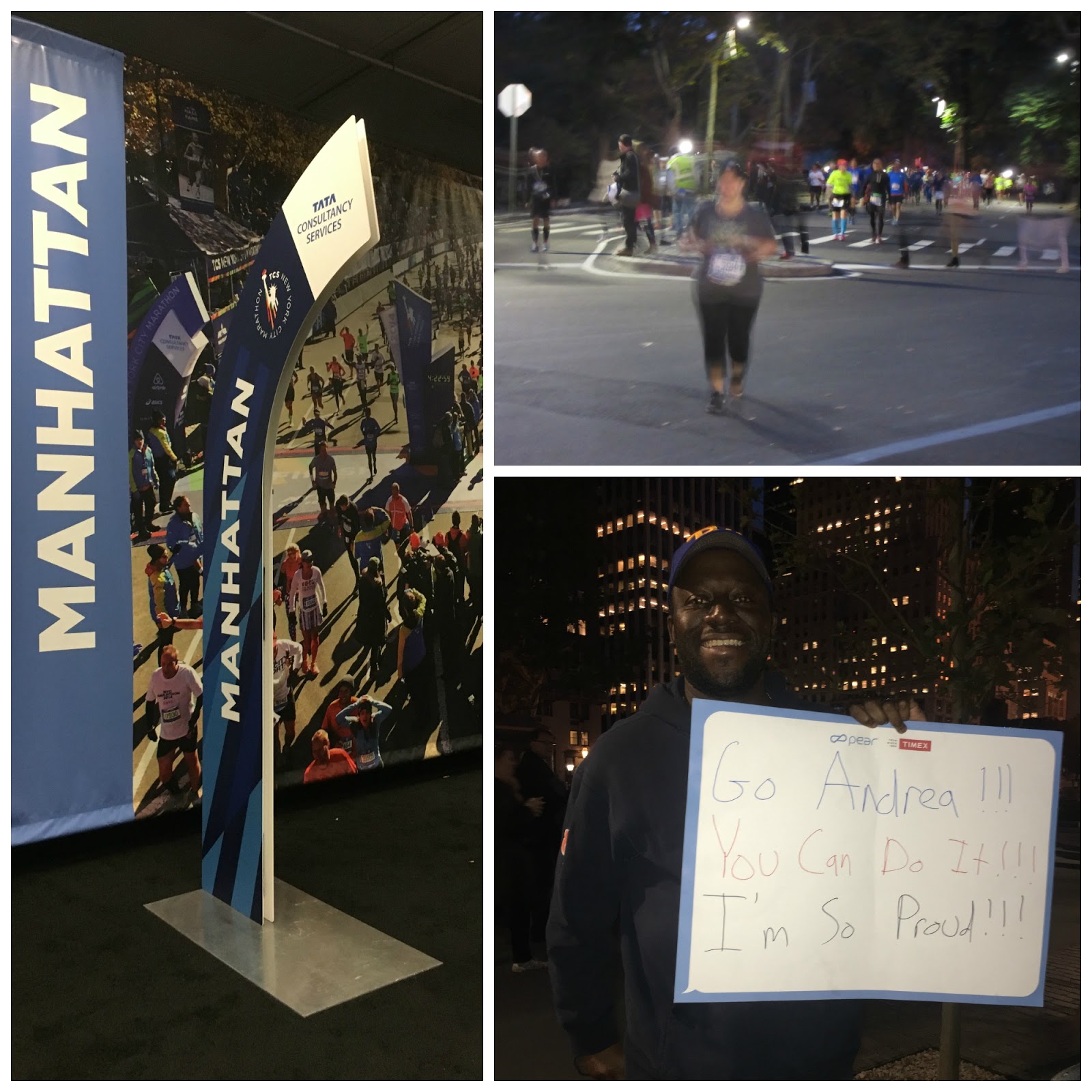 As we turned the curve of central park south to head toward the finish line, that final Mile 26 marker was glowing!  The remaining .2 miles was the longest of my life though.  When I could finally see the finish line, I sprinted as fast as my tired and aching body would allow.  And immediately texted "DONE!!!" to Chris.  Followed by, "Let's order pizza for dinner!  I'm starving!"  It took me another half hour to gather all my post-race goodies and tenderly walk through the crazy long exit path. 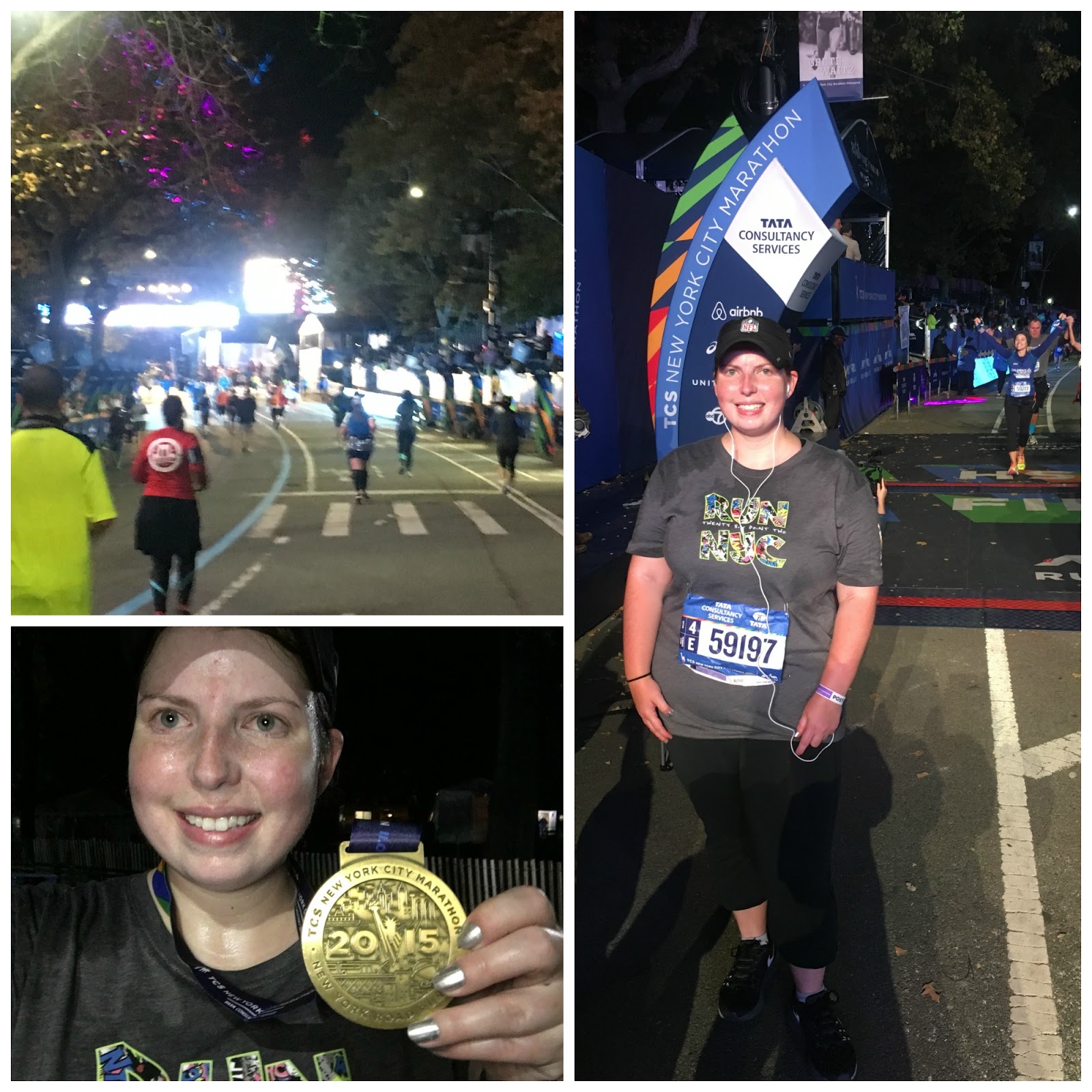 Finding the actual street was the second miracle of the day.  It wasn't long before I saw Chris headed my direction with a beautiful bouquet of roses.  Tears welled up in my eyes.  I am so blessed to have an amazing husband that met me at various points along the way to offer his much needed encouragement and ended one of the longest days of my life with flowers and a hug! He made me feel like I won the whole race!  Navigating the subway was a fun post-race experience, but I finally made it back to our apartment in one piece.  A totally different person than the one that left there that morning.  A two-time marathon finisher.  I still can't believe it. 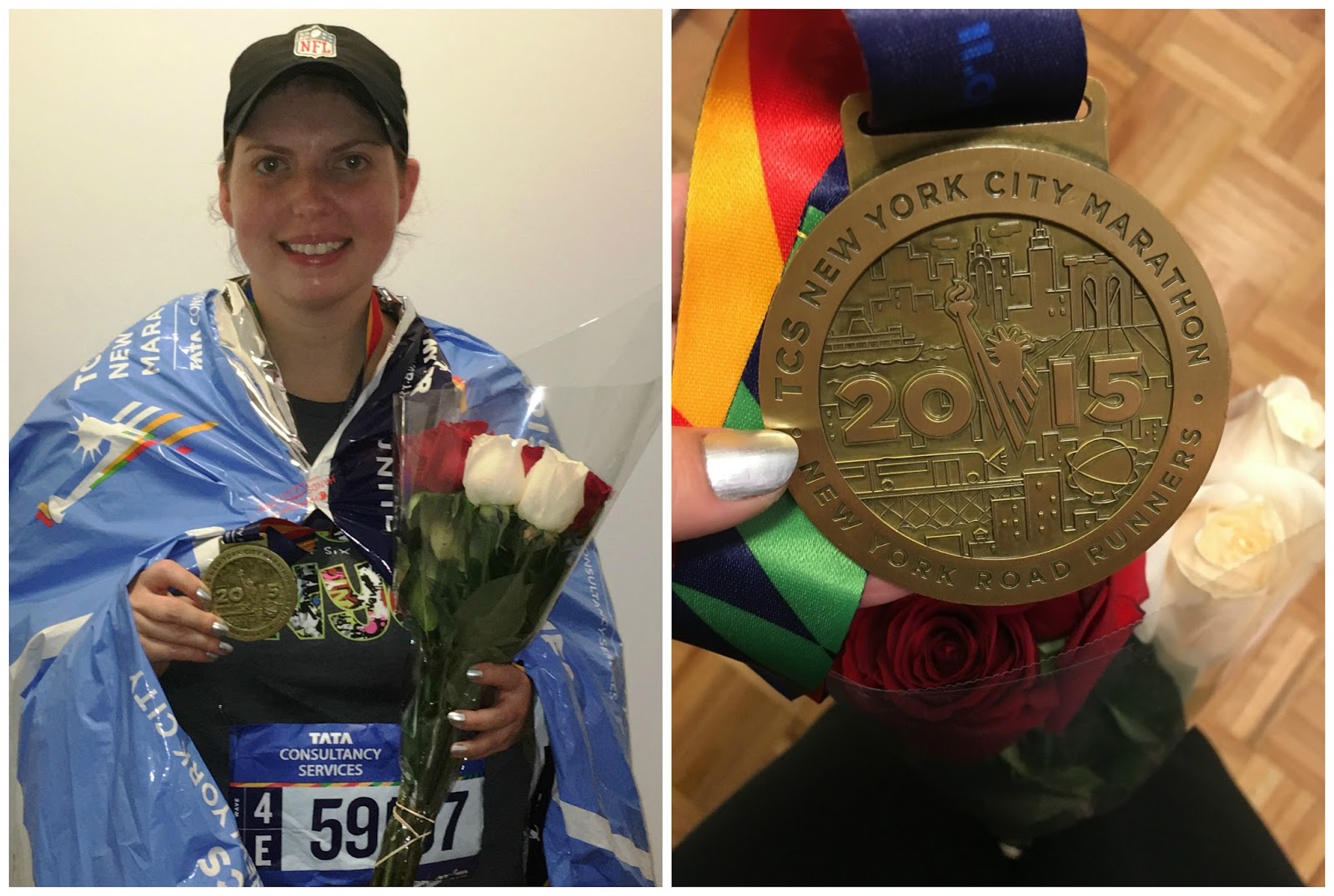 The next day was filled with lots of rest and movie watching.  I ventured over to Central Park to have my medal engraved in the afternoon.  It might not have been the time I was hoping it would be, but I'm still proud.  I did it.  I don't anticipate doing it again, but I did it.  Twice.  And I will cherish every single step - good and bad - forever. 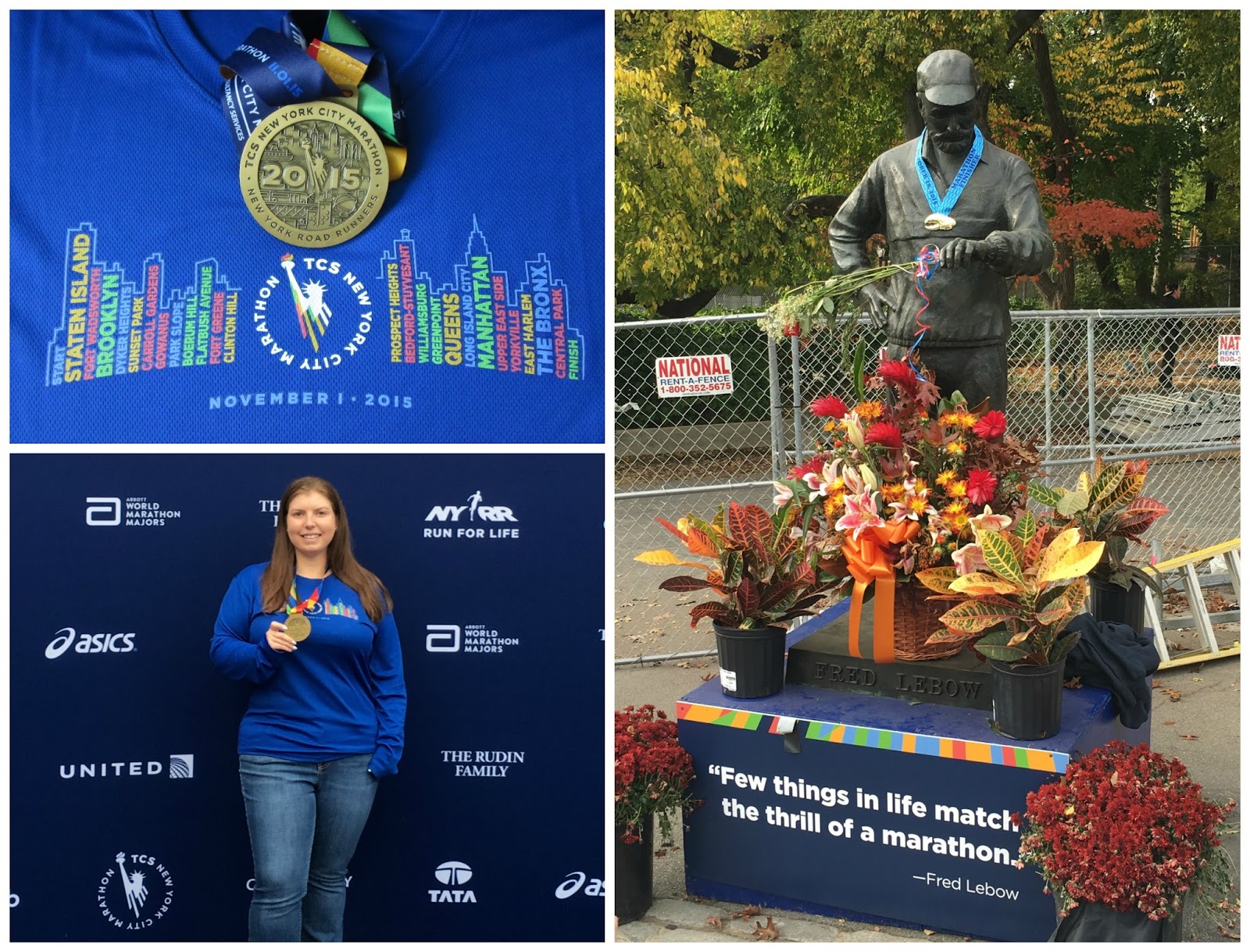