When I left off at the end of Part 1, my guests were just about to arrive in fabulous NOLA.  I left the NFL House event to drive over to the airport and pick up Chris.  Yes, I am the perfect an awesome girlfriend.  He was a little delayed, but luckily I didn't have to circle the airport too many times before he landed.  I was very excited to see him.  Working Super Bowl is stressful so there's nothing better than the day your guests arrive!!

We made it back to the hotel just as my brother, McKinley, and his travel buddy, Alex, arrived at the hotel.  Yes, they drove.  From Kentucky.  14 hours.  Crazy, but glad they were able to make it!  We finally got to sleep around 2am.  This was the beginning of the end of no sleep for me.  Unfortunately, the next few days I was getting up for work while my guests were sleeping in and having fun.  Oh, the joys of working the Super Bowl...


On Thursday, the guys slept in, ate lunch at the Whole Hog Cafe, and then headed over to NFL Experience.  They had a lot of fun!  They were able to play a little football with Russell Wilson and A.J. Green.  They also met Arian Foster.

They were full of stories about their exciting day when I got home from the accreditation center that night.  Since it was their first real night in the city, I quickly changed and we headed down to Bourbon Street.  Chris and Alex hadn't ever been to NOLA before so they were taking in all the sights and sounds!  After some initial debate of where to eat dinner, we settled on Oceana which was just off Bourbon Street.  Chris literally got a taste of New Orleans at this spot. 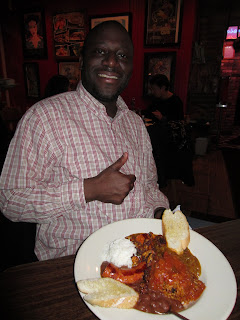 After these super heavy meals, we walked the streets for awhile collecting beads and looking for my favorite spot - Pat O'Brien's!  Luckily, we didn't take long to find it! 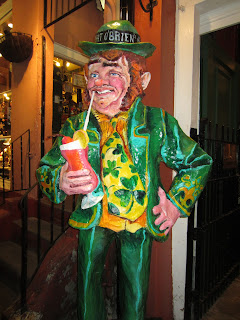 After we'd had enough of the insanity and crowds on Bourbon, we headed to the only logical place to go - Cafe du Monde!!  I told you I love that place!! 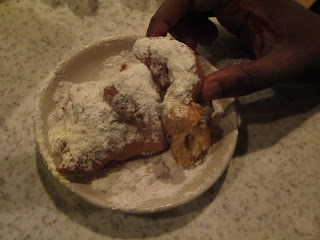 On Friday, Chris and McKinley were up bright and early to head over to the Media Center to check out Radio Row and see some of the press conferences live.  I can't begin to tell you all the people they saw there and the stories they told from their experiences, but if you had been following Chris on twitter (@MindofMaitland) then you could have read all about it!!  I do know that Chris was able to meet Vinny Testaverde, a fellow Elmontonian.  I think I just made up that term, but basically they grew up in the same town...and he's a former New York Jet!  Chris was super excited to meet him! 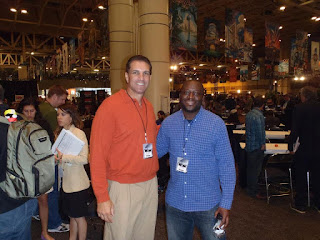 Friday was a late night at the credential office for me.  So late that we barely made it to Mother's for dinner.  They close at 10pm.  See, I told you it was pretty much all work and no play for me :)

After dinner, I wanted to go check out the Super Bowl letters so I could get my annual picture with them out of the way.  It was a bit of a wild goose chase to find the place, but we eventually made it there as well.  Just as they were closing.  This would be a theme for us going forward...unfortunately.  Good news is we made it there just in the nick of time...and got some fun pictures! 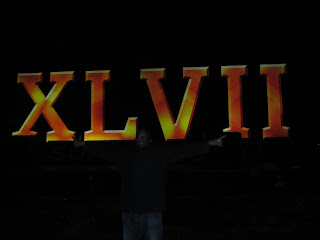 On Saturday, what I thought would be a fairly relaxed day turned into a nightmare when a few things got out of hand at the office.  Everything got resolved, but it ended up putting a totally strain on my evening plans.  To be honest, I should have known better than to think I could make plans and it would be as easy as that, but foolishly I did it anyway.  Honestly, it was pretty much the only thing I really wanted to do that week. We had tickets...free tickets...to the CMT Crossroads taping of Journey and Rascal Flatts.  RASCAL FLATTS!!  I love them!!  Very long (and exhausting) story later, we made it.  Sticking to our theme, we were the last ones in line of people that "made it", but we were there!  Only a few tears were shed along the way... 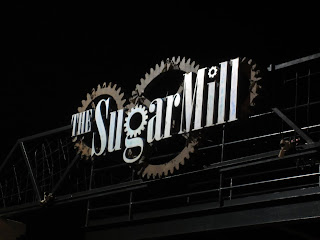 Needless to say, we were famished after the concert.  Nothing that a little pizza and cupcakes couldn't fix though!!  You knew I'd find my way to some fun cupcakes, didn't you?

We've covered SO much, but we haven't even made it to the main event yet!!  Stick around a little longer for the full game day recap!!  You won't want to miss it!!