The Marty Lyons Foundation was established in 1982 to fulfill the special wishes of children (age 3-17) that have been diagnosed as having a terminal or life threatening illness.

I heard about this foundation a few years ago when Marty was the guest speaker at an event I was attending.  I was moved by his story about how he decided to start the foundation.  I made contact with the foundation President at the end of the event.  On and off over the past few years, I have been able to help out here and there with this foundation.  This month was one of those times. 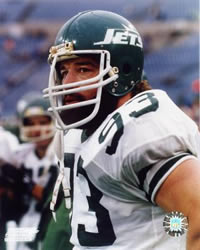 Here is Marty's story and vision as it appears on the foundation website:

Marty Lyons was a professional football player in the National Football League, where he served for twelve years as a premiere defensive lineman for the New York Jets.  Early in his career, Marty befriended and became a surrogate father to a three-year-old boy suffereing from an advanced illness.  Three years later, in the spring of 1982, the youngster's death coincided with the sudden death of Marty's father and the birth of his first child, a healthy son.  These experiences profoundly affected Marty's attitude toward life, fame, and his fellow human beings.  With the encouragement and assistance of family and friends, Marty Lyons became determined to establish a foundation dedicated to granting wishes of seriously ill children.

The Marty Lyons Foundation has kept hope alive in the hearts of children with a terminal or life threatening illness by making their special wish come true!  A fulfilled special wish has the ability to sweep the children and their family away from the daily heartache of illness.  It is a joyous time that creates a wonderful memory and a better quality of life.  Every child has a dream, and although we can't promise a lifetime of happiness to these seriously ill children, we can make one dream a reality!

We have granted wishes for a special trip to Disney, meet a celebrity, a computer system, a swimming pool filled with spring water, a shopping spree, special renovations to allow a child to live at home with family, a swin with dolphins, a Cinderella-like "Sweet 16" birthday party and so many more.


Do any charity groups pull at your heart strings?