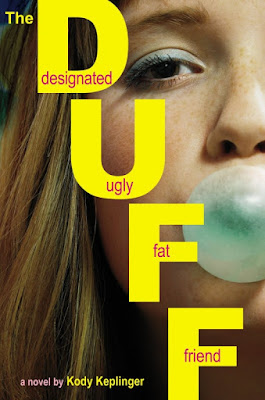 Seventeen-year-old Bianca Piper is cynical and loyal, and she doesn’t think she’s the prettiest of her friends by a long shot. She’s also way too smart to fall for the charms of man-slut and slimy school hottie Wesley Rush. In fact, Bianca hates him. And when he nicknames her “the Duff,” she throws her Coke in his face.

But things aren’t so great at home right now, and Bianca is desperate for a distraction. She ends up kissing Wesley. Worse, she likes it. Eager for escape, Bianca throws herself into a closeted enemies-with-benefits relationship with him.

Until it all goes horribly awry. It turns out Wesley isn’t such a bad listener, and his life is pretty screwed up, too. Suddenly Bianca realizes with absolute horror that she’s falling for the guy she thought she hated more than anyone.

I picked this book up for two reasons: 1) It was written by someone from McLean County (my hometown) and 2) The movie was being released and it looked interesting.  I am so glad I read it!  It is incredible to think that Kody wrote it when she was in high school.  Amazing!  It proved a bit more racy that I anticipated, but the overall story was a winner.  And I really loved the movie!  It was a bit more PG and literally had me LOLing!  Definitely recommend checking out both! 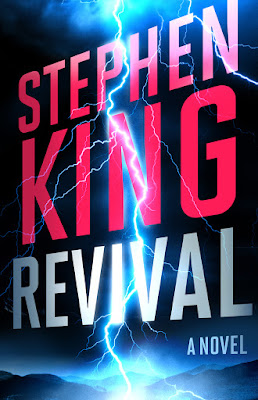 
A dark and electrifying novel about addiction, fanaticism, and what might exist on the other side of life.

In a small New England town, over half a century ago, a shadow falls over a small boy playing with his toy soldiers. Jamie Morton looks up to see a striking man, the new minister. Charles Jacobs, along with his beautiful wife, will transform the local church. The men and boys are all a bit in love with Mrs. Jacobs; the women and girls feel the same about Reverend Jacobs -- including Jamie's mother and beloved sister, Claire. With Jamie, the Reverend shares a deeper bond based on a secret obsession. When tragedy strikes the Jacobs family, this charismatic preacher curses God, mocks all religious belief, and is banished from the shocked town.

Jamie has demons of his own. Wed to his guitar from the age of thirteen, he plays in bands across the country, living the nomadic lifestyle of bar-band rock and roll while fleeing from his family's horrific loss. In his mid-thirties -- addicted to heroin, stranded, desperate -- Jamie meets Charles Jacobs again, with profound consequences for both men. Their bond becomes a pact beyond even the Devil's devising, and Jamie discovers that revival has many meanings.

This rich and disturbing novel spans five decades on its way to the most terrifying conclusion Stephen King has ever written. It's a masterpiece from King, in the great American tradition of Frank Norris, Nathaniel Hawthorne, and Edgar Allan Poe.

Simply put, this book was not for me.  I knew early on that I didn't really like where it was heading, but I hung in there and finished it.  As a Christian, it was difficult for me to read in many ways.  I did enjoy the character development and found myself wanting to know more about the mysterious Charlie Jacobs.  It was written from Jamie's point of view, but I think I may have liked it more if it has switched between Charlie and Jamie's viewpoints.  It would have also allowed me to see more of the direct reasoning behind many of the things that Charlie did.  Overall, I didn't love this one. 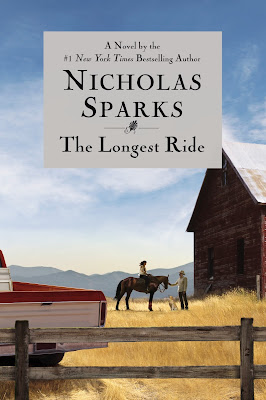 
Ira Levinson is in trouble. At ninety-one years old, in poor health and alone in the world, he finds himself stranded on an isolated embankment after a car crash. Suffering multiple injuries, he struggles to retain consciousness until a blurry image materializes and comes into focus beside him: his beloved wife Ruth, who passed away nine years ago. Urging him to hang on, she forces him to remain alert by recounting the stories of their lifetime together – how they met, the precious paintings they collected together, the dark days of WWII and its effect on them and their families. Ira knows that Ruth can’t possibly be in the car with him, but he clings to her words and his memories, reliving the sorrows and everyday joys that defined their marriage.

A few miles away, at a local rodeo, a Wake Forest College senior’s life is about to change. Recovering from a recent break-up, Sophia Danko meets a young cowboy named Luke, who bears little resemblance to the privileged frat boys she has encountered at school. Through Luke, Sophia is introduced to a world in which the stakes of survival and success, ruin and reward -- even life and death – loom large in everyday life. As she and Luke fall in love, Sophia finds herself imagining a future far removed from her plans -- a future that Luke has the power to rewrite . . . if the secret he’s keeping doesn’t destroy it first.

Ira and Ruth. Sophia and Luke. Two couples who have little in common, and who are separated by years and experience. Yet their lives will converge with unexpected poignancy, reminding us all that even the most difficult decisions can yield extraordinary journeys: beyond despair, beyond death, to the farthest reaches of the human heart.

It took me a bit to really get into this book, but it had me hooked once it got started.  I had pieced together how most of it would fall into place as Sparks has a pretty distinct style, but there were still a few loose ends and twists that had me wondering until the very end.  Based on the synopsis, I was expecting the two couples to intertwine much earlier than they did.  However, it was nice to bounce back and forth between two totally different stories for nearly the entire novel.  I enjoyed Ira's reflective voice as he looked back on his life with Ruth.  More than one story from their lifetime left me a little teary eyed.  Sophia and Luke presented a much more modern (and perhaps a bit unrealistic) model of relationship that moved very quickly.  It was fun to watch their relationship grow throughout the book, but I much preferred Ira's story.  I am quite curious to see if the movie does the book justice, but I haven't had a chance to check it out yet.  I can't imagine they'll find a way to include all the nuances and details that made the book so interesting though.


What have you been reading lately?