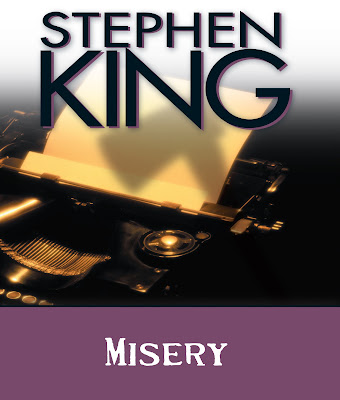 Fortunately, my Fab Four book club selected Misery by Stephen King for October.  It certainly fills the pre-2010 horror category and was the perfect book to set the mood for fall and all things Halloween!  This book was creepy and scary and horrifying, but SO good!


RIVETING.
What part of the book could you NOT get enough of?

I could not get enough of every part of this book.  Years ago, I watched the movie so I had an idea of how things would go, but I couldn't remember exact details.  This left me wanting more each time I put the book down.  And I put it down often because it just got too creepy for me after awhile.  I had to read in spurts to keep myself from having nightmares!  What a wild and crazy story!!  And I'm thrilled that Bruce Willis and Laurie Metcalf are slated to give it a limited engagement run on Broadway this winter.  Can't wait to see how everything is depicted on stage!

How did you relate to/care for the characters?
What's your thought on the plot line and twists and turns?

There were really only two characters - Paul and insane Annie!  Both were fascinating.  I can't say I really liked either of them much.  Regardless, both managed to draw me deeper and deeper into the story.  When Paul became semi-mobile, the story really takes a turn and started to enter a point where I just had to know what happens next.  Many times I found myself thinking...just one more chapter!  The other part of this book that was incredibly interesting to me (and really revealed the most about Annie) was when Paul looked through her "scrapbook" page by page.  It was amazing how much detail and thought was put into this brief, but quite significant portion of the book.

ASSOCIATE.
What other books are like this one? If none, did it remind you of a particular TV or movie with it's themes and characters? Does it serendipitous-ly line-up with things going on in your life or the news right now?

I am not a horror fan.  At all.  I don't read many books that give me the creeps for obvious reasons, but Misery did remind me a bit of some of the old James Patterson books I read WAY back in the day.  I'm talking about Along Came a Spider and Kiss the Girls.  Yeah...back in those days!

DESIGN.
You know you judged this book by the cover. What did you think of it?
How did it relate to the contents of the novel? And the font and layout of the pages?

The cover was ok.  A dark shot of a typewriter.  It certainly fit the story, but it doesn't necessarily draw me in.  The text of the book proved inviting though.  There were sections that appear to be typed on a typewriter.  Not just any typewriter, but the exact one that Paul is using.  The one missing an "n"...and eventually a few other popular letters.  I love how those sections of the book even included hand-filled n's.  So clever!  And I really loved the full handwritten portion of Paul's novel toward the conclusion of the book.  Unique way to connect readers with the character!

STARS.
How many out of five do you give this book? Would you recommend this book to a friend?

I give this book 4.5 out of 5 stars.  The last .5 was withheld due to various parts that made me really squeamish.  Too much detail on some of the gore for this lady! :)